In the course of this month, the Bulova Corporate Center, the former home of the Bulova Watch Company located in Queens, NY, will install four 200-ton Tecochill water-cooled chillers. The Tecogen (NASDAQ: TGEN – $2.20 & Fra: 2T1 – €1.70) units will replace five 170-ton Tecochills that were installed in 1994, and which consequently were approaching the end of their service lives. The sale also includes a long-term service contract, which will generate additional revenue for Tecogen over the years to come.

Once these four chillers are in operation, Tecogen will have six Tecochill units servicing the building, including two 350-ton DT Series chillers that were installed in 2002.

Benjamin Locke, Tecogen’s Co-CEO stated, “The chiller replacement cycle continues. The fact that customers are happy to do repeat business with us decades after an initial sale speaks volumes not only of the quality of our products and service, but also that the value proposition of our natural gas-powered chillers is real and unrivaled.”

TECOCHILL natural gas engine-driven chillers provide building owners with a reliable, proven, efficient, and cost-effective alternative to conventional electric motor-powered chillers. The engine drives a compressor that makes chilled water; while the engine’s free waste heat can be recovered to satisfy the building’s needs for hot water or heating. This process is sometimes referred to as “mechanical” cogeneration, as it generates no electrical power, and the equipment does not have to be connected to the utility grid.

The TECOCHILL chillers are available in capacities ranging from 25 to 400 tons, with the smaller units being air-cooled and the larger ones water-cooled. It’s the only natural gas engine-driven chiller on the North American market in its size range.

The purchase of these chillers qualifies for incentives from Con Edison’s Demand Management Program (DMP). The DMP offers electric customers ﬁnancial incentives for installing qualiﬁed equipment that will permanently reduce demand on the grid’s peak load. Incentives can sometimes be as high as 50% of the project’s costs. This program is open to Con Edison customers in New York City and Westchester County. 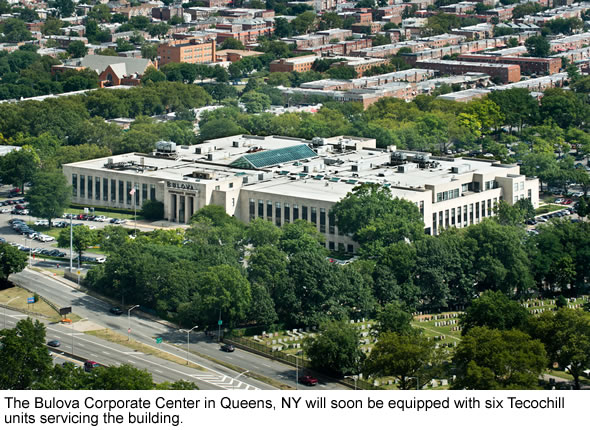 State-based incentives for natural gas-engine driven chillers are a boon for facilities across the Northeastern states. In Massachusetts, for example, an incentive of between $0.25 and $0.30 per kilowatt hour that is removed from the grid, is provided. Other states, such as Connecticut, New Jersey and Pennsylvania also offer incentives for similar installations.

In addition to reducing the cost of purchase thanks to these incentives, customers’ energy bills are also substantially lower over the service lives of the chillers. At Bulova, for example, millions of dollars in energy costs will be saved because of the super-efficient Tecochill chillers.

Next to the InVerde e+ CHP line, the Tecochills are becoming another successful product family for Tecogen. In the third quarter of 2017, for example, chiller sales more than doubled compared with the same period in the previous year.

Particularly indoor agriculture proves to be a rapidly emerging new opportunity for growth. To-date, Tecogen has inked nine transactions in the space, all but one of which is to buyers who intend to grow cannabis. Next to these customers however, also large residential and industrial facilities benefit from the use of Tecogen chillers as they considerably reduce operating costs. Recommendation BUY.