The past-producing Haib Copper Project features one of the oldest known copper porphyry deposits. The formation of this large deposit area is estimated to have occurred 1.8 billion years ago. During intervals of geological activity, many phases of deformation, shearing and faulting events occurred. These phases created structural features that served as conduits for subsurface fluids thereafter. Remobilization of copper and molybdenum content within these areas contributed to enriched grades. These higher grade zones are most attractive economically to support profitable mining.

Deep-South Resources Inc. (CA:DSM – $0.22 & US:DSMTF – $0.18 & GER:DSD – €0.16) envisions advancing the Haib project through to development of a producing mine. Several economic studies are currently underway as part of that process. However there is also additional exploration potential to expand on the total resources and perhaps outline higher grade portions of the deposit.

A focused drilling program commenced earlier this spring to explore for higher grade structures that may have been overlooked in previous work. The drilling will also target expansion beyond the previously identified resource zones. Successfully achieving these objectives will materially improve the potential economics for a mining operation. 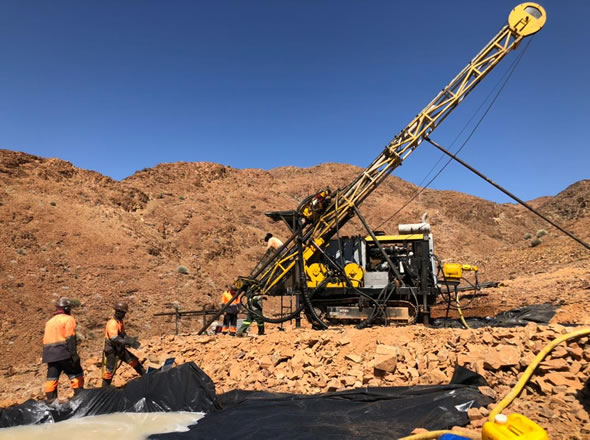 Three drill rigs are active on the property. 19 holes have been completed and two holes are currently in progress. The program is planned for 10,000 metres, of which 40% has been completed to date.

The first batch of assays for five drill holes was reported in May. The results were very encouraging in that higher grade structural targets were indeed confirmed within the established deposit.

This week, the Company reported another batch of assay results from the drill program. The data for three more drill holes, including more than 680 meters of core, was presented. These drill holes were concentrated within the Central area of the deposit. The highlight interval from these results included a section of 156m with an average grade of 0.46%CuEq from drill hole HM03. This also included a smaller interval of 24m at 0.65%CuEq.

Planview showing the location of boreholes HM02, HM03 and HM04

The drill plan for these holes was designed to intersect potential higher-grade structural targets which had been missed by previous exploration work. Also, drilling extended further beyond the defined mineralized deposit zones with the expectation that additional resource grade alteration would be intersected.

HM03 was notable in that attractive grades of copper were encountered starting almost from surface. Most of the 156m of the drill hole was mineralized. Higher grade molybdenum was reported in sections proximal to structural features. The grades were highly variable from one section to another with an exceptional result of 1.49%Mb reported in one section. Overall, an average grade of 0.014%Mb was achieved over the entire zone.

HM02 also demonstrated positive values for copper and molybdenum in the gap zone between the previously modeled pit shells of the deposit. The grade contour of the deposit representing 0.3%Cu was extended a further 40m to the northeast from the previously defined area. Attractive intervals further down hole also extended the established deposit further to depth. Molybdenum values were mostly of lower grade in this section, with an average of 0.006%Mb reported.

HM04 encountered similar grades to HM02. The hole was designed to test the extension to the north of Pit 2 in the interpreted gap zone between Pit 3. The results confirmed that the 0.3% copper contour is significantly wider than previously modeled. Lower grade molybdenum was also encountered with an average of 0.003%Mb reported for this section.

A total of 19 drill holes have now been completed in the program, with two others currently in process. This represents about 40% of the planned 10,000m of drilling work. The early results presented so far confirm that higher grade structural features are indeed present. The positive values from these drill holes, in addition to the results reported last month, are therefore extremely encouraging. This accomplishes one of the objectives for the current drilling program with much more drilling still ahead.

Drilling targeted to expand the lateral boundary of the pit zones is also off to a good start. In particular, the continuity of the 0.3% copper zone between Pits 2&3 is demonstrated from the deeper elevations of the drilling work so far. The defined area for the higher grade copper deposit within the 0.4% contour was also expanded. It also appears that the mineralization defined in Pit 2 and Pit 3 may be connected. As more drilling is completed in the gap zone it could be established that the entire area may be considered as one large pit shell.

Some deeper drilling is also planned at other sections of the deposit. Deep-South plans to drill a number of holes in this program to beyond 350m in depth. This work may outline a much greater vertical extent of the deposit than has been previously established. Following the process to assay all of the core samples the data will be incorporated into an updated resource estimate. MSA Group of South Africa has been selected as the consulting firm to prepare the updated resource report. The overall objective from this work is to upgrade resources to the Measured category of confidence for one or more higher grade zones of the deposit.

Deep-South remains committed to its plan for the advancement of the Haib project. Although a large and attractive resource has already been established based on historical work and more recent exploration led by the Company, the identification of potential higher grade copper and molybdenum zones are now the priority. Drilling work continues during what may become a pivotal phase to further improve the potential economics for a mining decision.

The first eight drill holes have now been reported. Significantly higher copper grades have been encountered than the average so far for the overall deposit, often across wide intervals of mineralization. The presence of molybdenum has also been established across wide intervals. This enrichment improves the projected economic potential for the area.

Another promising trend is that the conceptual open-pit shell has become larger as wider mineralized zones are presented. The defined pits using both the 0.3% and 0.4% copper contour outlines have increased by more than 70m within the upper 250m of the deposit. Success to extend the limits of the deposit zones both laterally and to depth will contribute towards the expansion of the overall deposit.

Additional results are pending and this promising potential may become yet another catalyst to build shareholder value as work continues. Haib is delivering on its potential as one of the most attractive copper mine development prospects worldwide. Smallcaps Recommendation: BUY.