The McNeely project has recorded spodumene (lithium mineral) occurrences in surface showings, trenches and drill holes. Multiple spodumene bearing pegmatite dykes are reported with spodumene content of up to 20% reported in some dykes.

A large number of the McNeely claims surround, or are in close proximity to, the Augustus Lithium Property, which is also owned by First Energy Metals. Only last week, FE announced that it intersected a 19-meter-wide zone with 1.17 percent lithium oxide (Li2O) in a drill hole. This hole was part of a 5,000m program that was conducted earlier this year.

This is another prime example of how Globex acquires properties at a low cost when few people are interested in them, and then is able to vend them a few years later for a substantial profit.

The 100% interest in some of the McNeely property was acquired by Globex in 2016 in exchange for undertaking the renewal of the claims and reserving a one percent (1%) Net Smelter Royalty (NSR) for the vendor. Globex then over time staked additional claims creating the current 66 claim package. Now Globex sold the property for a total of $820,000 (including the FE shares), and on top of that retains a 3% GMR if the property ever makes it to production. All in all, again creating significant shareholder value with just one transaction.

In other news, Excellon Resources (EXN) is soon commencing a new drill campaign at its 100% owned Silver City project in Saxony, Germany.

In 2017, Globex acquired the vast silver mining district in Germany. The area, part of the well-known Freiberg Mining Field, is roughly 164 square kilometres (~63 square mile) large and consists of numerous previously active mining projects, with some dating back to the 12th century. Throughout its history, one area of the Freiburg silver camp, has yielded at least 882 tonnes of silver.

In 2019, Globex subsequently vended the property to Excellon. Over the 3-year term of this deal, the total cash payments amount to $500,000, while the total payment in Excellon shares issued to Globex was worth C$1.6 million when the agreement was signed. In addition, Globex retains a Gross Metals Royalty (GMR) of 3% on all precious metals production at Silver City, and a 2.5% on all other metals. The GMR leverage alone may amount to a significant value proposition to Globex shareholders. 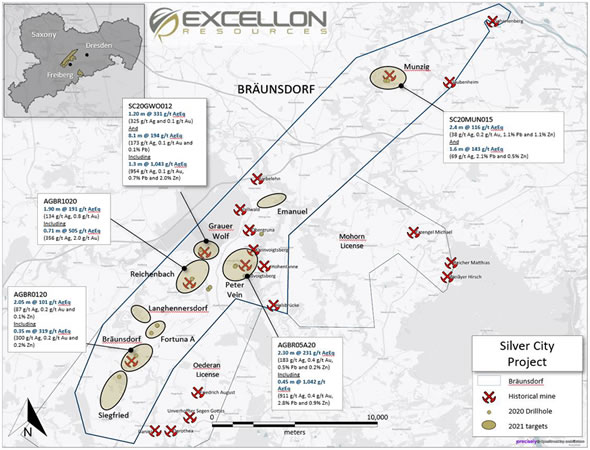 The Silver City Project was mined for high-grade silver from the 12th until the late 19th century. Records indicate high-grade silver production over substantial widths throughout the district. Excellon has embarked on the first modern day exploration program focused on precious metals.

Last year, EXN conducted a drill program at Silver City, totaling 3,700 metres over 24 kilometres of strike. The program confirmed the presence of a major epithermal system. It encountered high-grade silver species and delivered high-grade assays, including some new discoveries.

This year’s drill program will total 12,000m and concentrate on four priority targets. Moreover, the program is also designed to test new targets on over 30 kilometres of strike. The months ahead will be exciting for both Excellon and Globex shareholders as the assay results are announced.

These two announcement this week, again make it clear why Globexs’ project generator business model is so rewarding when it’s well-executed. The value proposition for Globex is enhanced by the strategy to build diversification amongst the holdings of the Company. This means that management is working to establish ownership of multiple properties, in different jurisdictions, and with leverage to many resources. Globex currently controls approximately 193 properties including 74 royalties.

Income generated through property transactions is often significant, like this week with the McNeely Lithium project. In addition, Globex maintains leverage to several projects through a suite of royalty holdings.

All in all, the combination of attractive property holdings, a diversified business model, and a clean balance sheet with a well-funded treasury and no debt, has positioned Globex as one of the safest and best junior mining stocks in Canada. Smallcaps Recommendation: BUY.