Renforth Resources Inc. (CA:RFR – $0.09 & US:RFHRF – $0.07 & GER:9RR – €0.06) continues to issue a steady flow of positive news. On the heels of the extensive drilling programs that were recently completed at Parbec and Surimeau, the Company is already proceeding with exploration activities at some of its other properties.

Project geologists have considered the relatively unknown expanse of the Malartic West property. The overall property area amounts to more than 50 square kilometers, adjoining the Surimeau project to the south. Malartic West is also situated on the western boundary of the Canadian Malartic Gold Mine. Sediment-hosted gold alteration has been encountered within the property similar to the gold resource zones of the neighboring mine. However, it is an intriguing surface showing of copper-silver alteration that will become the initial exploration target. This zone was encountered through surface prospecting and sampling work completed by a previous operator.

Renforth sent a team to the surface outcrop area in 2019 as part of a wider reconnaissance effort at Malartic West. Grab samples were collected during two visits that fall. Appealing alteration was encountered with grades of up to 3.59% copper. The best assay results included values up to 8.31 g/t silver. These results confirmed historic data reported by SOQUEM from trenching and sampling efforts. This outcrop target has been traced along a strike of 160m where a layer of surface overburden prevented further investigation.

Renforth was now able to secure the services of a smaller drill rig that should be turning by next week. This unit is operated by one person and is ideal for shallower drilling work, which is planned for this program. 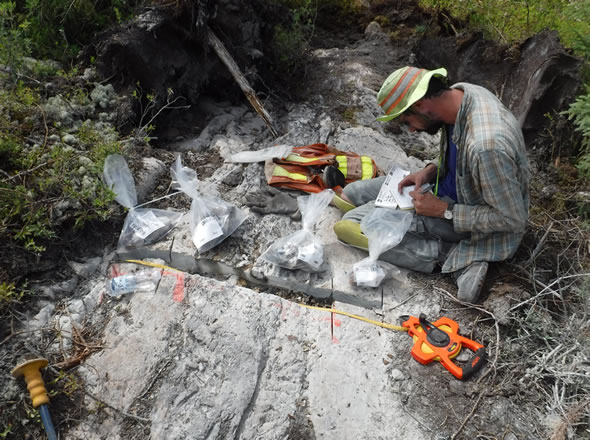 Part of the 160m target where the overburden has been cleared.

A total of about 1000m will be drilled during this program, which should take about a month to complete. Drill core will be logged, split and sampled as it is pulled and sent for assay. The regular shipment of samples while the drilling is underway may lead to a faster turnaround time to secure assay results.

This maiden drill program is exciting, because so far there is limited data available to provide clues on the structural setting below the outcrop. Even determining the potential strike is challenging since the surface showing extends into a section of heavy overburden. At least one ‘blind’ drill hole will speculatively target the unknown extent below the surface overburden zone.

The copper-silver target zone is located within an area that does not demonstrate a geophysical signature. Enrichment of these two metals in the same deformation zone is considered unusual in this part of Quebec. Program geologists are very hopeful that the drill core may duplicate the surface sampling results. Encountering a few intervals of similar grades across meaningful core widths would therefore amount to a very successful start for the exploration at this property.

Mind that although the copper-silver target represents an area of interest for the maiden drilling effort, it is by no means the entire story for Malartic West. The Cadillac Break structure, for example, passes within a few hundred meters from the northeast corner of the property. In addition, there are many other structural targets that will be worthy of further exploration work in the future.

Positive Assay Results Continue to be Reported from Parbec

In addition to the speculative appeal from exploration at Surimeau and now Malartic West, Renforth continues to receive small batches of assay results from the recently completed program at Parbec. And as shareholders have become accustomed, the results are very good. This week the Company reported another series of assay data including some partial results from three drill holes.

Drill Hole PAR-21-133 provided the highlight numbers from a high grade gold zone. These best results were encountered at deeper elevations. One interval of 7.5m was mineralized with 3.23 g/t gold, at a depth of 250m down hole. This was followed by an enriched section of 7m that carried an average of 7.11 g/t gold. Deeper drilling work continues to confirm expectations that higher grade gold alteration extends well below the interpreted open pit shell for the deposit. Assay results for the first 70m of this drill core are still pending. This drill hole was selected to twin a previously completed drill hole from 1988. A fault zone was encountered within the higher grade zone that may have been a factor related to gold enrichment, but also created technical challenges to extract the drill core. Renforth was able to confirm this high grade gold zone and it will contribute to the pending updated resource estimate.

The final results from Hole PAR-21-127 were also reported. Recall that the deeper elevations of this drill hole had been disclosed earlier and multiple gold zones were encountered throughout this drill hole down to nearly 300m depth.

The near surface extension of this drill core is now confirmed. A chunky interval of 5m with an average of 1.02 g/t gold was achieved roughly 100m down the drill hole. The upper portion of PAR-21-130 was also received and achieved a near surface gold interval.

Malartic West is effectively the northern extension of the larger Surimeau project. Both properties are located within an established mining camp with significant production of precious and base metals. Abundant infrastructure including road and power access is in close proximity. Attractive structural geology has been mapped extending across the properties on a district scale. These systems have contributed to the enrichment of many of the most productive mineral deposits throughout the region.

It is hard to imagine a more attractive setting for a high value resource discovery. Meanwhile, the Province of Quebec has indicated that exploration and development of critical and strategic elements is a priority. The stakes are therefore very high as Renforth works to advance these properties and realize the discovery potential.

Parbec remains the flagship property and the prospect that may deliver the greatest upgrade in shareholder value over the near term as the gold resources for the project continue to increase. The latest assay results promise to contribute significant upside when the updated resource estimate is completed (expected later this year). All of the assays from drilling from last year have now been reported. Only a handful of the 21 holes in the second phase this year have been received. This means a lot more news to come.

Renforth has demonstrated the commitment to build shareholder value at the end of the drill bit. The Company is still awaiting the assay results from the recent drilling at Surimeau yet is already advancing another program to investigate Malartic West. The impressive track record to achieve discovery success year after year is another highlight for this ambitious junior explorer that builds expectations for the current round. Renforth appears to be firing on all cylinders as a finely tuned exploration specialist. Smallcaps Recommendation: BUY.