News » Why I’m Adding to My Position in NSGold

Why I’m Adding to My Position in NSGold 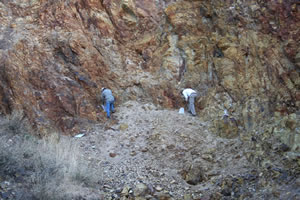 NSGold geologists taking ground samples at Dios Padre as part of their due diligence process.

NSGold Corporation (NSX – $0.72) has signed a definitive option agreement to acquire 100% ownership of the Dios Padre Silver Property. The stock closed up 33% for the week.

About a month ago, the Company announced the signing of a Letter of Intent to acquire the property. In the meantime NSGold’s management, along with a few geologists, visited Dios Padre, completed the due diligence and negotiated the definitive option agreement with the current owner.

NSGold can acquire the historic silver mine for a total of US$6 million payable over a five year period with early payments lower and later payments increasing. This is a very good deal as hardly any cash had to be paid right away, so the funds can be used to develop the property. In addition, the seller will receive 1.25 million common shares of NSGold, payable in five equal tranches over a 5-year period.

The Dios Padre agreement is also subject to a 3% net smelter royalty in favor of the vendor. Two percent can be repurchased by NSGold at any time prior to the commencement of commercial production by the payment of US$2 million.

16 million ounces of silver (today worth approximately US$650 million) is reported to be mined since the early 17th century from Dios Padre.

What you have to know to fully understand the property’s potential is that the silver deposit was created by a breccia pipe. Breccia pipes were formed millions of years ago by the explosive release of steam and gases during the cooling of the intrusion. These pipes sometimes extend for thousands of feet towards the surface and usually contain fragments of the ore body present at depth. This means that below the surface there has to be a source for the silver on top.

Although there are plenty of reviews and evaluations for the open pit part of the property, so far there’s little information available about the resources underground.

Additionally, numerous other mineralized areas can be seen on the property. There’s little information available about the precious metals content of these areas, so an exploration and development program will have to shed light on this.

NSGold has assembled an extremely qualified technical team to prepare an NI 43-101 technical report within the next 30 days. For example, David A. Bending, who’s experience with Dios Padre dates back to 2002, is part of the team. His report will include a recommended work program with the objective of supporting a NI 43-101 compliant resource estimation.

I also anxiously await the final drill results and NI 43-101 resource estimate for the Company’s Mooseland Gold property in Nova Scotia, Canada. These can be expected any day, and when positive, should give the stock another boost.

By the way, I’ll be visiting Nova Scotia in a few weeks and will give you a first-hand eyewitness report of NSGold’s activities over there.

Since this week, the Company is also quoted on the Frankfurt Stock Exchange. This is good news for investors that wanted to buy NSGold shares but couldn’t, because their broker or bank didn’t execute orders on the TSX Venture Exchange.

Judging by how NSGold’s stock price surged after the Dios Padre announcement, it’s clear the market had doubts whether the Company’s management could actually close this terrific deal after announcing it less than a month ago. They did close the deal, and I’m confident we’ll see many more positive things happening with this junior miner.

I will add to my own position in NSGold. As we are on the same team, you are invited to join me.