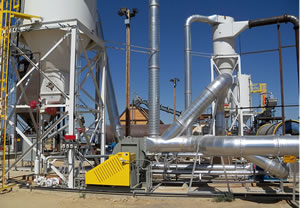 Greensteam's very low emissions of CO, NOx and other particulates during tests are the real differentiator from other biomass to energy technologies.

In my previous update on Global Green Solutions (GGRN – $0.14) we wrote that the Company was going to raise some additional funds to complete the testing of its Greensteam demonstration unit at Aera Energy.

Including investors outside of the US, the Company has raised over $770,000 since its last year end, and is more than half way towards its current target of $1.5 M.

The Greensteam demonstration unit is currently being optimized to maximize the output and minimize its emissions. Remember that Greensteam’s very low emissions of CO, NOx and other particulates during tests are the real differentiator from other biomass to energy technologies. This will enable Greensteam to meet the most stringent emissions regulations worldwide.

The Greensteam demonstration unit should be ready in a few weeks to start its final 30-day continuous test.

The market for green initiatives continues to improve, simply because the costs for maintaining our current energy production model is getting out of hand. Only when we start feeling financial pain, we’re motivated to adapt. For example, why do many Europeans drive a 1.2 liter engine car? Simply because we pay over $8 a gallon at the gas station.

The Californian cap-and-trade* scheme, which is scheduled for 2012, is another example of a costly event for companies that don’t adapt. For each metric ton that a company emits it will have to pay a fee. Prices are expected to start at about $13 a ton, but will go to $75 a ton by 2020 according to a report by Point Carbon, a Thomson Reuters company.

* CAP-AND-TRADE The cap-and-trade plan puts a limit on total emissions of greenhouse gases, and year by year decreases that limit. Companies or other groups are issued emission permits and are required to hold an equivalent number of allowances (or credits) which represent the right to emit a specific amount. The total amount of allowances and credits cannot exceed the cap, limiting total emissions to that level. Companies that need to increase their emission allowance must buy credits from those who pollute less. The transfer of allowances is referred to as a trade. In effect, the buyer is paying a charge for polluting, while the seller is being rewarded for having reduced emissions by more than was needed.

For industrial steam producers this means they’ll either have to buy more credits each year, as their maximum emissions limit decreases, or they’ll need to reduce their carbon emissions by installing new equipment. Greensteam is perfectly suited as a re-powering solution for those companies.

For example, the planned Greensteam project at Aera Energy would generate greenhouse gas emission reduction benefits worth more than $22M annually at $75/tonne.

Global Green’s management continues to execute as planned. I expect to see the start of the 30-day continuous test shortly.

Spread the word, Global Green is one of the most undervalued greentech Companies on the market today.