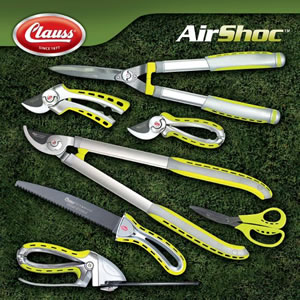 Design is joy.
Design is engaging.
Design is passion.
Design is cool. (not in the cold sense of the word)
Design makes products sell.

GOOD DESIGN is an award from the Chicago Athenaeum, Museum of Architecture and Design and is one of the oldest and most important design competitions worldwide. This year the Museum received more than 500 submissions from 36 countries. It’s extremely unusual that an entire product family wins 6 awards at once and is in fact the first time this happens to my knowledge.

The loppers, hedge shears, branch saws, grass and garden shears have Titanium-Bonded Non-Stick blades which prevent saps and adhesives from sticking to the blades. The product family features Microban antibacterial treated blades and grips to protect the user as well as the plants themselves. The AirShoc grips are engineered to reduce the impact and fatigue of cutting through branches, etc.

Acme United’s iPoint battery powered pencil sharpener won a GOOD DESIGN award back in 2006. In 2010, its successor, the iPoint Evolution did the same thing. The Company expects to sell about $10 million worth of iPoints… this year alone.

In order to sell a product, it used to be sufficient that it worked well. In 2010, consumers have an almost endless choice of impeccable working products. As a result, Companies need to go that extra mile to manufacture outstanding items that have additional features and a fabulous design.

A product doesn’t sell because it wins a GOOD DESIGN award, it sells because it HAS a good design.

The AirShoc garden tools are now in full production. Orders are being received with initial shipments beginning in the first quarter of 2011.