While the electrical grid has been remarkably stable and even short term outages are very rare, they do occur. Occasional extreme weather events or failure of critical equipment can cause an interruption to electric service with catastrophic consequences for end users that absolutely must have access to electricity at all times.

Power reliability is the foremost concern for many electrical consumers. For example, even a short interruption in conventional power systems could be devastating for the functioning of a hospital facility. Similarly, remote locations that are not adequately served through the conventional power grid may opt for on-site generating systems to manage the demand for uninterrupted electrical power.

As an established green-energy company with a long history of successfully constructing, installing, and operating on-site power generation systems, Tecogen Inc. (NASDAQ: TGEN – $3.25 & Fra: 2T1 – €2.71) has demonstrated its proven technology. Tecogen provides a range of custom solutions to provide back-up power and even heating and air conditioning, through generation systems installed to operate independently from the electrical power grid.

As the technology has evolved, Tecogen has been able to increase the overall energy efficiency of its product line, while also achieving improvements in the durability of its operating units. The Company has also recognized the priority expressed by some of its clients to adapt to a more ‘green’ profile with the advantage of lower pollution emissions that can be realized from its high tech Ultera emissions technology. In certain jurisdictions this green energy designation has also enabled tax incentives and applicable rebates that contribute to lower the overall cost base for its clients and make the systems more attractive.

This technology advantage need not transform the entire electrical generation market in order for it to be successful. Even capturing a relatively small share of the overall market can be extremely lucrative and the growth potential remains enormous going forward.

An established player in this niche market, Tecogen has been active in the sector since the 1960s and achieved a number of historic milestones with its revolutionary technology, including development of the first major cogenerator unit in 1980. The Company maintained leadership in the industry with subsequent breakthroughs to deliver air-conditioning and refrigeration capacity in the late 1980s and early 1990s.

Over the last decade Tecogen has followed up with industry-leading performance including the rollout of Fourth-generation Emission Controls in 2011 that are capable of meeting the highest environmental standards set by California, and in 2012 with the introduction of the Ilios ultra high-efficiency water heaters. Refinements and the drive for increased efficiency have remained the priorities throughout the development of this technology. In June of this year, Tecogen launched the most advanced line of cogeneration systems on the market.

With a corporate history spanning several decades, Tecogen is an established player in an emerging subsector. Thanks to its industry-leading technology, its positive track record with more than 3000 installed units operating in the field, its status of being a net profitable Company, and the strong growth potential going forward, Tecogen may be considered a bargain in the market at this time.

Peer analysis is one method to consider the relative merits of two companies and draw conclusions regarding market value. The recent IPO for rival Bloom Energy (NYSE: BE), which develops fuel cells that use natural gas to provide distributed generation of electricity, provides some comparative metrics that underscores the value proposition for Tecogen.

While the two companies compete within the market based on the features and reliability of their product lines, the differences between them do raise some eyebrows.

In terms of efficiency of the operating system, which is one of the key metrics considered by end users, the Bloom Energy Server delivers an estimated efficiency of 65% at the beginning of the cell stack life. However, there is considerable efficiency loss over the life span of the system. According to the company’s S-1 Registration Statement that was filed with the SEC, its servers currently operate at average efficiency of approximately 53%.

Efficiency is defined as the percentage of a unit’s input fuel that is converted to energy which can then be sold to the customer. The higher the efficiency, the less fuel used to generate a given unit of energy output, resulting in lower fuel costs.

The InVerde e+ CHP (Combined Heat and Power) cogeneration product line offered by Tecogen utilizes an inverter to produce alternating current that enables the unit to operate at variable speeds. The InVerde e+ also functions to harvest heat from the combustion of natural gas that is available to produce thermal energy. By capturing much of the thermal energy created through the electrical generation process that would otherwise be lost, the combined effect from these innovations is an overall efficiency between 80-90% achieved in actual operating conditions.

Moreover, the InVerde e+ uses Tecogen’s exclusively licensed microgrid technology that enables units to operate as a conventional CHP application interconnected to the electric grid, but with the capacity to disconnect from the grid and continue operating as an “island” whenever a grid disruption occurs. 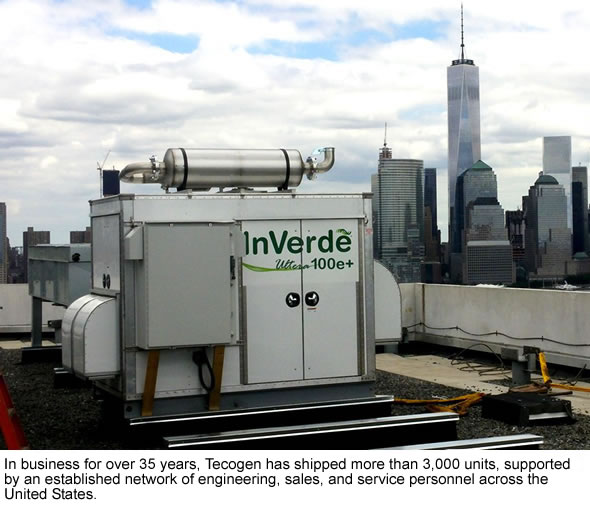 Profitability and debt are other metrics worthy of consideration in any comparative analysis. Bloom Energy recently reported a loss of $18 million in its latest quarterly results, and the company and its subsidiaries carry a net debt level in the range of $950 million. Profitability is nowhere near in sight for Bloom Energy, although its CEO mistakenly claimed it was. In contrast, Tecogen was able to report a net profit in six of the past seven quarters, with the exception being the second quarter of 2017 when the ADGE acquisition was completed. The Company recently secured a $10 million revolving line of credit facility, and its net liabilities amount to less than $19 million.

Finally, InVerde units have been deployed in the field since 2008, and Tecogen has achieved a milestone of more than 3.5 million hours of operations for its combined fleet, far exceeding the performance record for any of its competitors, and setting the benchmark for reliability in the industry.

Even though one could reasonably assume that both companies will continue to deliver improvements in their product lines, and the trend to increased efficiency will fuel further growth potential ahead, the disparity of the market valuation for these two companies is of interest. Despite its status as an industry leader, with a history of innovations and technology breakthroughs, and an enviable track record of reliability in the subsector, Tecogen currently carries a market cap of less than 4% of Bloom Energy’s. The potential going forward is even more appealing given the much lower debt levels for the Company, and the fact that it has achieved a net profit.

In summary, both Tecogen and Bloom Energy have developed widely respected, advanced machinery that is critical within the industry to provide on-site energy. Tecogen’s InVerde e+ CHP units offer an advantage in terms of efficiency and established track record of service. Given that Tecogen currently trades at a fraction of the market cap for that of Bloom Energy, this serves to underline the conclusion that Tecogen is undervalued relative to its peer, and the expectation to close this gap with a much higher share price is a reasonable outlook for the future. Recommendation: BUY.