Enforcer Gold (TSX-V: VEIN) has started a comprehensive field exploration program at the Montalembert high-grade gold property, located in Quebec, Canada. The program includes the first ever large-diameter core drilling campaign to be conducted on the Galena and No. 2 veins. The exploration program is expected to run uninterrupted through the late fall of 2017.

The field program, for which Enforcer has committed over $2.2 million, includes:
• Increasing the exposure of the Galena and No.2 veins along their north and south strike directions (see map below);
• Additional channel sampling along the vein extensions;
• Ground IP surveys around known vein occurrences;
• Property-wide prospecting and geochemical sampling;
• Ground follow-up of airborne geophysical anomalies;
• 5,000 to 8,000 meters of large diameter diamond drilling; and
• Targeted 1,000 meters of reverse circulation drilling.

Steve Roebuck, the President and CEO of Enforcer Gold, commented, “The property is underexplored in terms of modern exploration techniques, and the high-grade showings – two recent channel samples from the Galena vein assayed 510.79 grams per tonne Au over 1 meter and 118.79 grams per tonne Au over 1 meter – have not received the level of investigation commensurate with their potential. The 2017 program is designed to explore the property in a methodical and systematic way, increasing our knowledge of the controls to mineralization in area and expanding and prioritizing targets for diamond drilling.”

Enforcer Gold is earning a 100% stake in the 7300-square hectare Montalembert project. In order to do so, it’s required to:
• Pay Globex $2.6 million over a four year period;
• Issue Globex 8.5 million shares of Enforcer’s common stock; and
• Undertake $15 million in work.

Moreover, should Enforcer acquire the property, Globex will retain a Gross Metal Royalty (GMR) of 6% on the first 150,000 ounces of gold produced (9,000 ounces) and 3.5% GMR thereafter.

Enforcer is very well financed as it recently raised close to $5 million in a non-brokered private placement.

The drill program will total approximately 1,600m on the Sharpe and Moody Hill areas. Drilling is expected to last about three weeks, and final assay results should be available by early July.

This drill program follows on the heels of a previous campaign that consisted of 16 holes totaling 3,589 meters, and which was designed as an initial evaluation of historic manganese occurrences on the property.

Findings of that program included:
• Confirmation of significant widths of near surface manganese mineralization over a strike length of approximately 1.5 km;
• Manganese Oxide (MnO) grades such as 16.73% over 32.85m (107.8 feet) and 13.87% over 52.6m (172.5 feet) were encountered; and
• The mineralization showed good continuity and was intersected from surface to vertical depths of 115 meters. It remains open to depth and along strike.

In addition, core samples from previous drilling have been sent for laboratory scale leaching tests to determine manganese recovery and sulphuric acid consumption as these are key process design and operating cost drivers. These results are expected within 4 to 6 weeks. 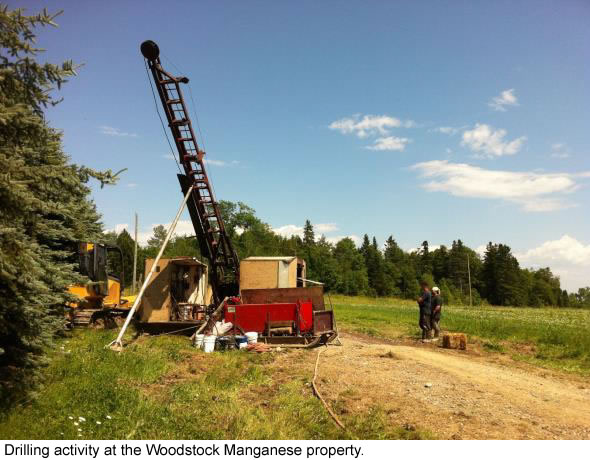 The Company is exploring the property with the objective of potential future development through low cost open pit mining.

Manganese is essential in the production of stainless steel and as an alloying agent with aluminum but it has many other uses including in new alkaline batteries and rapidly developing lithium ion manganese batteries where MnO2 acts as the primary cathode material. This developing technology is promising as the magnesium‐oxide components are abundant, non‐toxic and provide better thermal stability.

The further advancement of these properties is obviously excellent news for Globex, as it generates a steady long term income for the Company. For example, a couple of weeks ago, Globex received an additional stock payment of 1 million Manganese X shares per the agreement. Those shares have a present value of $120,000.

Globex has dozens of similar option partners that are advancing their respective properties, and from which the Company receives payment in shares and/or cash. Recommendation BUY.