Remember that a few weeks ago, Globex commenced excavating three 100 metre long trenches in an area where no prior sampling or exploration was conducted. In addition Globex undertook six other trenches. Five along where the Francoeur-Wasa gold localizing fault is expected to be and one south of the main Francoeur-Wasa fault. Assay results from the first trench located immediately south of the main Francoeur-Wasa Fault which is the localizing structure for the Francoeur and Arntfield gold deposits have been received.

Obviously, these are excellent results. Although it’s unclear at the moment how far this intersection continues, it’s good to know that in the 1930s Arntfield Mines had two intersections when they conducted the initial exploration on the property. They followed one intersection and were able to open up several mines based on that initial intersection. However, they never follow-up on the other intersection. That’s what Globex now went after. On the area where the overburden wasn’t thick (see image below), Globex found these excellent values. Very interesting!

Furthermore, the Company sold its Donalda gold property to Falco Resources Ltd. (TSXV:FPC) for which it received cash, shares, and a royalty stream on all future production. Most importantly, however, Falco also transferred 100% ownership to Globex of three mining claims (the Dickenson property) that are adjacent to the Francoeur/Arntfield project.

These claims, totaling 211.38 ha, may cover up to 1.5 km of the eastward extension of the gold localizing Francoeur-Wasa Fault which is associated with six historical mines on Globex’s Francoeur/Arntfield gold property. Previous drilling on the Dickenson property also reveals numerous gold intersections. Basically, the addition of these new claims improves the potential of the whole property yet again.

All of this will allow the Company to continue to seek an open pittable, large tonnage, low grade gold exploration property along with looking for higher grade targets such as found by this new discovery. This low-grade model is contrary to work conducted by previous owners of Francoeur/Arntfield. Historical exploration and mining focused on narrow high-grade gold shears and veins which could be mined by traditional underground mining methods.

Arntfield – A Wealth of Potential

The above trenching results encompass the area around the old Arntfield mines which have produced roughly 0.5 million tonnes of Au at a grade of 3.98 g/t in the 1930’s and 1940’s. Despite Northern Miner’s assessment from the early 1990’s that there could be another 600,000 tonnes of gold ore at similar grades, the area was not mined further.

One should also remember that the previous mining operations were focused on using traditional underground mining, but did not explore, or mine for that matter, the areas which showed potential for large surface deposits. Interestingly, some of these parts were already assayed in the past but dismissed as uneconomic despite returning samples with grades of around 1.7 to 2.4 g/t of Au. These under-explored areas are exactly what Globex is now looking at. 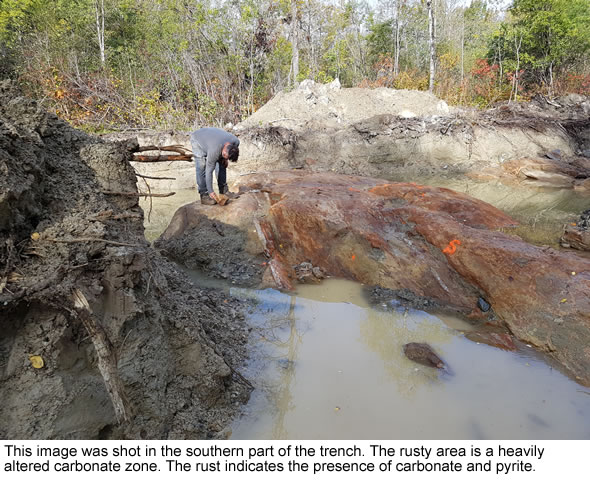 The fact that Globex owns a significant number of attractive properties, allows the Company to be flexible and opportunistic. When it thinks it is getting a good deal, it can sell one or two projects in order to either supplement its cash flow or to expand existing projects. The sale of the Donalda property to Falco Resources achieved both of these benefits.

The Donalda Mine Property, located in Quebec, Canada, consists of seven mining claims, covering approximately 146 hectares. In return for the property, Globex received $300,000 in cash which can immediately be put to good use. Secondly, Globex also received units which consist of 350,000 shares of Falco and an equal amount of warrants that permits the Company to buy more Falco shares at a price of C$1.15 per common share, for a period of 5 years. This allows Globex to benefit from any future success that Falco may achieve.

Additionally, Falco has agreed to grant Globex a 2.5% Gross Metal Royalty on all mineral production from the Donalda Gold Mine property. The royalty is especially interesting as the Donalda property is host to two continuous gold bearing quartz veins which had a historical resource of 1.5 million tonnes grading 6.9 g/t gold, of which approximately 790,000 tonnes were mined and approximately 710,000 tonnes remain unexploited. There are also indications that the gold deposits continue below 700 metres depth.

Interesting to note is that Falco is very well capitalized, as it had roughly C$53 million cash on its balance sheet at June 30, 2017, and thus should not have an issue moving the project forward.

These recent trenching results solidify the potential of the Francoeur/Arntfield project. It’s clear that this property is likely to become one of Globex’ key assets, and could generate a significant new stream of news in the short term and potentially revenue for the Company sometime in the future.

Further positives this week include the sale of Donalda property, which not only offers Globex the opportunity to strengthen its cash flow and future revenue, but also improves the potential of the Francoeur/Arntfield area due to the new mining claims Globex received as a part of the deal.

While on the subject of cash flow, the Company recently reorganized its accounting force to save money. Globex hired two separate accounting firms to respectively supply a CFO and a corporate secretary. This will create a lower expense than having an individual in-house CFO. A smart move by Globex to reorganize its expenditures.

Finally, during the past week Globex also sold several other of its gold and silica properties. The Company sold its Penarroya Gold/Copper property to Midland Exploration for a 1% Gross Metal Royalty and its Matchi-Manitou Gold property to Renforth Resources for $2,000 and a 2% Gross Metal Royalty. The silica sale consisted of five projects in Newfoundland and Labrador and three in Quebec. They were sold for cost and a 1% gross mineral royalty to a private company.

While these transactions are smaller in size, They all bode well for Globex’ track record of delivering long-term shareholder value. Recommendation BUY.