Tecogen Inc. (NASDAQ: TGEN – $3.76 & Fra: 2T1 – €3.12), which designs, manufactures, sells, installs, and maintains high efficiency, ultra-clean, cogeneration products, announced third quarter revenues of $7,938,684 compared with revenues of $8,501,198 for the same period in 2017. Although this represents a decline of 6.6% it’s noteworthy to mention that last year’s third quarter revenue was an all-time high for the Company.

Product revenues for the third quarter of 2018 increased 14.0% compared with Q3 last year. Especially the high number of chiller sales contributed to this solid performance. Total service and installation revenue declined by 17.8% over the prior year period, primarily due to decreased installation activity. Energy production revenue from the Company’s American DG Energy sites declined 6.2%. This revenue stream adds an important second source – next to service and installation – of stable cash flows thanks to its long-term service contracts. 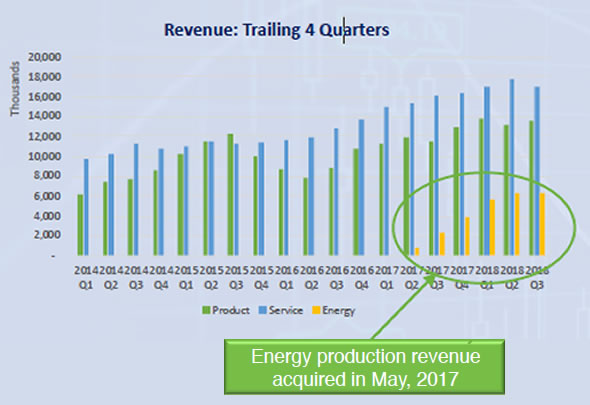 Tecogen’s net loss for the third quarter of 2018 was $603,000 compared to an income of $27,000 for Q3 2017, a decrease of $630,000. The decline is attributable to several items. R&D expenses, for example, increased 16.3% as the Company continues to invest in its emissions technology. Additionally, selling expenses increased by 78%, and Tecogen also opened a service centre in Florida contributing to an increase in G&A expenses of $155,000.

Backlog of products and installations was $15.7 million as of the end of the third quarter of 2018 and stood at $20.2 million as of November 9, 2018. The solid and rising backlog is driven by strong traction in both the InVerde and TecoChill product lines, as well as installation services.

Chiller unit sales account for about $6.3 million of the current backlog as the HVAC industry increasingly recognizes the tremendous value of so-called mechanical CHP with the TecoChill product, which uses natural gas instead of traditional electric equipment.

Note that the backlog does not include service contract revenues, nor does it include ADG’s estimated undiscounted future energy production revenue, which exceeds $50 million, stretching over the next 15 years.

Mr. Locke, the CEO of Tecogen commented, “While we are disappointed with the drop in overall revenues, the third quarter saw a lot of progress in terms of positioning the Company for future growth. We expect product sales and overall revenues in our core business to rebound as we execute on our plans to expand our chiller product line, and we anticipate initiating a fleet retrofit project with our forklift partner, Mitsubishi Caterpillar Forklift America Inc, in 2019.”

Service revenues in the third quarter of 2018 were $3,713,770 compared to $4,519,467 for the same period in 2017, a decrease of $805,697 or 17.8%. This decrease in the third quarter is due to a decrease in installation activity of $761,694 and a decrease of $44,003 in service contract revenues. While service contract revenue remains relatively constant, installation activity can vary widely depending on the status of various projects.

The third quarter saw a decline in cogeneration sales as Tecogen’s attention is more focused on rapidly growing market segments for its gas engine chiller products. In fact, the Company is set to re-launch its TecoFrost product to meet the growing demand for natural gas cooling using ammonia refrigerants for cold storage and other premium chiller applications. The goal is the launch the product early 2019, with initial sales following shortly.

TecoFrost is perfect for a wide range of applications, including cold food storage, ice production, food processors, breweries, dairies, wineries, pharmaceutical and industrial processes, including ice rinks and petrochemical. Note that the above image is from an old TecoFrost.

The Tecochill product, which circulates chilled water or directly chilled air, is not an ideal fit for these applications, as ammonia is much more efficient. On the other hand, a TecoFrost unit can’t be used in hotels, schools, or commercial buildings, as ammonia posed a safety hazard.

The original TecoFrost product line was discontinued in the early 2000s due to high gas prices, but the resurgence in gas availability, combined with continued electric grid escalation, particularly on the demand component of electric grids, makes TecoFrost an excellent product to reintroduce given the strong market pull.

Mr Locke mentioned during the third quarter conference call, “The goal is to jointly market and sell the product using our combined sales channels. With Vilter Manufacturing’s help, we plan on building and selling the first new TecoFrost unit in the first half of 2019 with sales of more units expected throughout 2019.”

Although Tecogen didn’t have a profitable third quarter, it continues to position itself for significant growth in the coming years. Its fundamental business is strong and growing, the important product advantages are well understood by the industry, and the Company’s emissions technology offers tremendous upside and value creation for shareholders.

The Company aims to return to profitability next quarter. It will do so by continuing to grow product sales, particularly in the chillers segment, managing its turnkey construction projects better to improve margins, and controlling expenses.

As for 2019, market forces continue to favour Tecogen’s clean, reliable, natural gas generation systems. First, natural gas will remain an abundant and cost effective resource in the U.S. for many years to come, while electricity generation and distribution will remain expensive in many urban areas with the aging infrastructure.

Therefore, natural gas generation systems, whether co-generation or chillers, are in an excellent position to displace electric systems for many industrial processes.

In general, chiller sales are an excellent contributor to the Company’s business because the sales process tends to be more defined and transactional. Chiller replacements occur all the time throughout the HVAC sales and engineering community, which allows a continuous flow of opportunities through those established channels.

Finally, as ever more attention globally is focused on emissions, Tecogen’s proprietary Ultera emissions technology continues to be validated as a cost effective and adaptable retrofit, or OEM component, for many gas engine systems, such as CHP chillers, other stationary engines, standby generators, forklifts, light vehicles, medium trucks, buses, or automobiles. It is proven that Ultera dramatically reduces CO and NOx emitted in the environment. While the timing of emissions regulations is imprecise, it’s clear that state-by-state, country-by-country, the Ultera near-zero emissions technology will be valued highly in both transportation vehicles and industrial engine systems. Recommendation: BUY.