After a torrid pace of activity this year, EnWave Corporation (CA:ENW – $1.81 & US:NWVCF – $1.35 & GER:E4U – €1.25) driven in part by the successful sales process targeting international markets, is showing no signs of slowing down.

This week, the Company reported yet another deal in the food processing subsector. A Technology Evaluation and License Option Agreement (TELOA) was signed with Pick-One S.A. de CV, based in Mexico. This arrangement will afford Pick-One the opportunity to rent a smaller 10kW REV machine and complete sample processing to test the effectiveness of the technology for a line of snack food products. Pick-One will pay a monthly evaluation fee during this process. As with similar deals, EnWave provides support from its own technical team to assist with the development process.

Similar to the progression achieved by several peer companies in this sector, the TELOA may prompt Pick-One to begin production using REV processing. Additional development work may continue towards the creation of entirely new food products. Ultimately this work may lead to a more significant partnership in the months ahead. 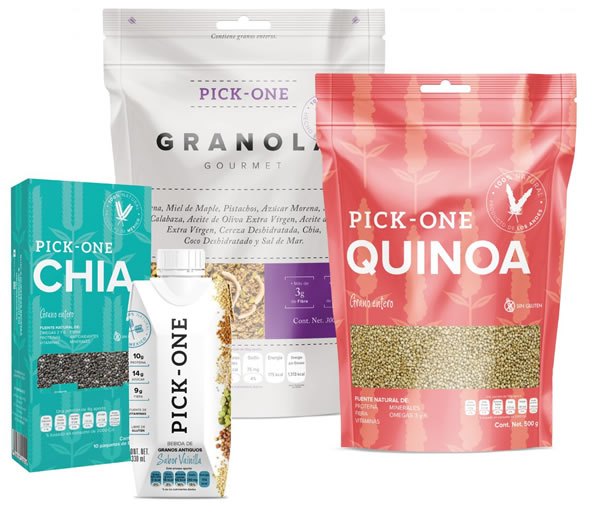 A selection of the products that Pick-One has on the market.

Pick-One has also been granted a non-exclusive option to license the REV technology in Mexico for the production of snack food products. Following the test and development process, Pick-One may advance to a full partnership involving the purchase of its own REV machine to commence production of a snack food line for distribution in Mexico. This is the desired outcome for the TELOA as it would involve a royalty deal to build longer term revenue growth for EnWave.

As an established producer of popular snack food products, Pick-One is well positioned in Mexico to support the ongoing international expansion objectives to advance REV technology. Mexico is already an important trading partner with Canada under the NAFTA agreement. The country has benefited with stronger growth and increased economic activity through partnerships with foreign businesses. This creates a more prosperous domestic market with higher growth potential.

EnWave has had a steady flow of new contract agreements this year. These deals led to a full order book for the manufacturing of REV units, which is excellent news as equipment sales build longer term revenue growth.

These strong achievements supported a rapid rise in market value for the Company. Shares of EnWave have performed among the top small cap stocks in Canada for extended intervals this year.

Some of this success was fueled by the meteoric rise for the cannabis sector on North American stock markets. The advantages of REV processing to dry cannabis flowers led to several break-through contracts in the industry.

This in turn motivated The Cannabis ETF and the Horizon Marijuana Life Sciences Index to include EnWave as a holding within these baskets of stocks providing leverage to the sector. Now that the cannabis sector is in the midst of a major correction, the impact of this selling pressure on the ETFs is also being felt on the market action for EnWave as an individual stock holding.

The cannabis sector has been enormously successful for EnWave. Substantial untapped potential remains as expansion continues in many countries worldwide. However, EnWave is not a cannabis stock. As a diversified company with participation in numerous other sectors its overall performance is tied to many product categories.

Significant partnership agreements in a variety of sectors are already in hand. A platform of steady growth is expected to contribute to longer term performance objectives. As such this current episode of market volatility amounts to a healthy correction driven by outside factors that is not representative of the outlook for EnWave itself.

Perhaps the most attractive aspect to the story for EnWave is the potential to achieve progress with numerous opportunities simultaneously. Significant inroads have been made in several sectors where REV technology was entirely unknown previously. Important business relationships have been established with reputable partner companies that involved intense scrutiny and rigorous testing prior to forging these alliances. Often, the process requires years of patient and thorough participation from the EnWave sales team to achieve a successful outcome. It is this potential with numerous irons in the fire that provides the greatest attraction going forward for shareholders.

Sales proficiency to effectively present the benefits of REV technology is demonstrated by the announcement of new TELOA agreements. Thereafter, the roster of royalty partners that have subsequently purchased REV units and commenced production speaks for itself.

Pick-One is the latest of many such new alliances for EnWave. Collectively, all of the various agreements provide a measure of diversification. In this context the market volatility for EnWave shares may be seen as an opportunity. The outlook remains attractive with much of the growth curve still in the future for this Company.