As 2019 winds down, Globex Mining Enterprises Inc. (CA:GMX – $0.33 & US:GLBXF – $0.25 & GER:G1MN €0.22) has once again updated a busy year of exploration work at its Francoeur/Arntfield Mines project in Quebec. This is the third year of comprehensive exploration activity since the Company acquired the property. Additional land holdings have been added during that time to further build on the emerging gold deposit area.

Multiple phases of exploration activity have recently been completed at several target areas of the project. These included trenching, surface stripping followed by channel sampling and diamond drilling. Additional assay results were reported this month for the zones of interest from this work. 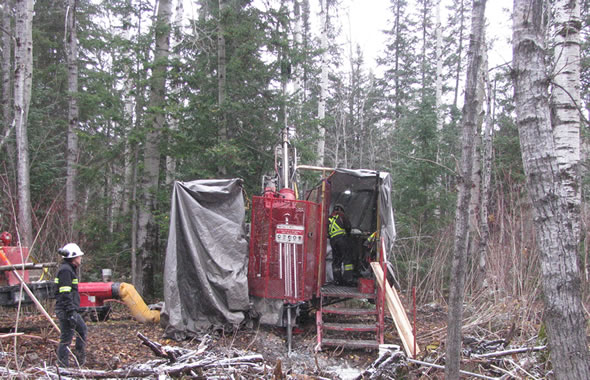 The 450 Zone area remains a high-priority target with the potential to build significant additional gold resources. A promising section of this target was opened to further investigation in the fall. Surface stripping and subsequent washing of the exposed bedrock enabled channel samples to be extracted.

Assay results from the first phase of work were reported in October. Follow-up work was then initiated for the north side of this target section.

Assays from this northern perimeter trenching included several intervals spanning one meter or more where attractive gold grades were encountered. The best section from this round was an interval of 4m bearing an average of 6.21 g/t gold. Grab samples from the same target area also yielded encouraging assay values up to 7.82 g/t gold.

To put this in context, large near surface gold zones may support open pit mining. Average gold grades in the range of 1 -2 g/t may be lavishly economic for extraction. For example, the nearby Canadian Malartic Mine in Quebec is one of the largest gold mines in Canada. Operating successfully for many years, gold resources at Canadian Malartic average slightly higher than 1 g/t. The potential for a large tonnage of lower grade gold to be defined near surface at Francoeur/Arntfield is therefore of interest even as the higher grade zones are being expanded further to depth.

Globex recently completed additional diamond drilling at another section of the 450 Zone, punching three shallow holes. This target was highlighted based on historical drilling work, where assays of 3.11 g/t gold had been reported over 5.91m in hole H-127.

One drill hole targeted an extension further to depth of this historical intercept, and encountered a wider interval of 13.5m with an average of 1.47 g/t gold. A second hole tested further to the north of this intercept and extended deeper. Several mineralized zones were encountered, highlighted by a 2.4m section averaging 3.56 g/t gold.

The third drill hole was completed 50m to the east, incepting a wide zone of 1.81 g/t gold from 76m to 87m down hole. This has been interpreted as the same shear zone that was encountered previously in historic drilling work, with a section of 24.7m reported that averaged 1.13 g/t gold. Within these intervals, smaller sections of higher grade were also noted.

The wide intervals of gold encountered within these near surface alteration sections are extremely attractive. Globex’s management has expressed satisfaction with the results and the determination to follow up with additional drill work in the expectation to outline a larger deposit in this section.

Exploration Work Advancing at Other Targets

The Francoeur/Arntfield Gold Mines Project is notable for the multiple areas of gold alteration that have been encountered so far. At the Arntfield #2 Shaft area, for example, two drill holes were completed to test below a target zone previously outlined from surface trenching work. One drill hole located 115m to the northwest of the shaft intercepted 21.3 m of alteration with an average grade of 1.45 g/t gold. A second drill hole 60m to the northeast did not encounter significant gold values.

Two drill holes were also completed to test the edge of a section identified through induced polarization geophysical surveying. This section was dubbed the South Shear West. An interval of 1.4m bearing 2.02 g/t gold was the best result reported from this drilling effort.

Rounding out the update, the Murphy Zone had previously yielded intriguing gold values up to 25.4 g/t gold from grab samples collected during the summer. Surface stripping and channel sampling was undertaken to follow up. Several positive gold bearings sections were encountered including the most attractive interval extending 5.6m and bearing 1.59 g/t gold.

The commitment to a strategy of focused exploration work at Francoeur/Arntfield is paying off with steady progress to expand the overall gold resource of the property. The endowment of gold showings on the property is impressive.

Formerly producing mines located along the major structural corridor demonstrate that a significant gold-bearing system extends through the property. There is also a historic gold resource estimate compiled by a previous operator for the project. A useful database of historical information provides further geological information worthy of follow up. Numerous gold intervals reported from recent exploration activity were achieved due to scrutiny of historical gold zones and data.

With all of the work underway at Francoeur/Arntfield, it is just one of several projects that Globex is currently advancing. This Company maintains an aggressive pace of activity and diversification through multiple exploration projects. The overall discovery potential is unmatched among its peers. Globex remains one of the best junior exploration stocks in Canada for investors to participate in the junior mining sector. SmallCaps Recommendation: BUY.