Despite the decreasing revenue, gross profit increased 8% from $3,159,594 to $3,425,915. The investment community never wants to see declining year-over-year revenues; however, the increase in service revenue and in gross margin is indicative of a turnaround.

The Company has been active in signing lucrative contracts this year. Most of these contracts haven’t resulted in revenues just yet but will eventually bear fruit in the remaining two quarters of 2019 and the start of 2020. Backlog is $28 million as of August 12 and doesn’t include a large megawatt cogeneration opportunity spread among many buildings in a mostly new geography for Tecogen. A decision on this project is expected to be made in the third quarter, so investors should pay close attention for an upcoming news release. 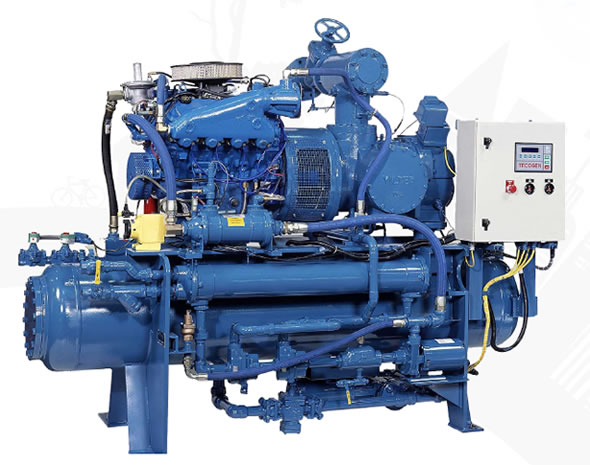 Refrigeration plants have extremely large electrical demand and usage loads. In many application’s this load peaks in the daytime and summer, the same periods when electricity is the most expensive and natural gas supply is the most abundant. Owners can save significantly in their total energy costs by using Tecogen’s Tecofrost.

Benjamin Locke, CEO of Tecogen commented, “While the second quarter has historically seen lower revenues, we made excellent progress in terms of improving our overall margins. Our backlog is as strong as ever, and we fully expect product sales and revenues to increase in the second half of the year with the goal of maintaining full year positive adjusted EBITDA. We are also very excited about a significant opportunity for an order for upwards of 3 megawatts of InVerde cogeneration equipment that, while not in our backlog, could be decided upon in the second half of the year with resulting equipment sales in the first half of 2020. Our growing product backlog, strong service margins, and increased interest in our Ultera emission technology is exciting for the Company, and I am very enthusiastic about our prospects for the remainder of the year and into 2020.”

Tecogen ended Q2 2019 with $26,177,250 in current assets against current liabilities of $10,649,607 for a very strong 2.5x current ratio. The Company currently has no debt as it was paid off from the proceeds of the sale of a portion of the ADG assets in Q1. The Company has no need to finance, unless it is to fund a substantial growth opportunity.

Tecofrost and Ultera Product Lines Are Adding To Backlog

As previously mentioned, backlog was $28 million as of August 12, 2019. This backlog figure includes the Company’s first TecoFrost order. Tecogen expects to install an improved system at a local facility in Massachusetts before the end of 2019. It adeptly chose this site as a soft launch due to its proximity to the Company’s factory in Waltham so its operations can be monitored closely. A similar soft launch is expected on the West Coast later this year. Assuming all goes to plan, the Company will be building a strong pipeline of projects for TecoFrost across the United States in 2020.

Tecogen received an order to complete the engineering of an up-sized Ultera system for use in municipal water pumping in Southern California. But the biggest near-term opportunity lies with its partnership with Caterpillar and Mitsubishi Fork Truck of America. The aim of the Ultera Emissions Technology program is to make MFCA’s forklifts certified near-zero emission engines. If successful, this will have demonstrated that the Ultera retrofitting engine can be used to make any other alternative fuel vehicle – such as propane or natural gas fleets – certified to near-zero emissions.

Despite the strong margins and improving EBITDA in a historically weak quarter for the Company, the market was not receptive to Tecogen’s Q2 results. Some investors must have been shaken by the decrease in revenue as the stock dipped to a new 52-week low. Even though the decline can be easily explained by the drop in energy production revenues due to the ADG sale. We must stress that the 10% decline seen on the stock price immediately following Tuesday’s release was only on 37,000 volume, so this wasn’t exactly a race to the exits. While painful in the short term, investors can feel confident that the declining revenue for Q2 2019 is not a trend. With the growing backlog and numerous recent deals signed, Tecogen is poised to show strong revenue growth.

We have mentioned before that TGEN is a buying opportunity and we remain steadfast in that belief despite the new 52-week low being made this week. Now is a particularly ideal time. Why? Because the contracts and growing backlog will result in revenue over the next several quarters. Just like how the market overreacted to Q2’s results in a negative fashion, it may overreact in a positive fashion this time next year.

TGEN remains an excellent investment for patient and risk-tolerant investors with at least a one year time horizon. Its thinly traded nature makes it a prime candidate for a major run towards our target price on continued positive news or demonstrated profitability and revenue growth. Smallcaps Recommendation: BUY.