News » Tecogen Takes Next Step in Ultera Development for Vehicles

Tecogen Takes Next Step in Ultera Development for Vehicles

A few weeks ago, Tecogen Inc. (TGEN – $2.52 & Fra: 2T1 – €2.32) and the co-investors in Ultra Emissions Technologies (ULTRATEK) decided to dissolve the joint venture, as they couldn’t reach an agreement on the path forward.

Remember that Tecogen’s Ultera lowers emissions of criteria pollutants – carbon monoxide (CO), Nitrogen oxides (NOx), non-methane hydrocarbons (NMOG) – to levels similar to that of a fuel cell. It is already installed on hundreds of stationary natural gas-powered machines, such as CHPs and chillers, across North America.

Ms. Bernard said, “Ultera’s path towards commercialization has never been clearer. Independent testing of Ultera by AVL proved in a laboratory setting that Ultera nearly eliminates CO, NOx, and non-methane hydrocarbons (NMOG) emissions from automotive gasoline engines. The goal now is to have our technology incorporated into an automobile so that we can test it in real world driving conditions.”

Comfortable Cash Position Thanks to Dissolution

Given the likelihood that the company would have completed the dissolution of ULTRATEK first before creating the new entity, all unspent funds of the ULTRATEK joint venture have probably by now been distributed back to its investors. Consequently, it stands to reason that Tecogen has received approximately $1.6 million in cash. Assuming no net change in accounts receivable, payable, or other balance sheet items, this brings Tecogen’s total cash to well over $4 million and puts the Company in a comfortable position from a balance sheet standpoint.

Moreover, the IP that it licensed to ULTRATEK when it was founded, and all the non-cash assets of ULTRATEK, including two awarded patents, four patent applications, and all data and knowhow gained during the lifespan of the JV, were also returned to Tecogen.

Thanks to two phases of testing, conducted over the past 18 months, Ultratek has obtained a successful proof of concept, which demonstrates the Ultera’s effectiveness for automotive applications. Emissions of carbon monoxide (CO) and non-methane hydrocarbons (NMOG) were reduced by as much as 94% and 81% respectively due to the use of the Ultera emissions technology!

Despite the fact that the JV was being dissolved, Tecogen representatives continued to have productive meetings with potential partners from the automotive industry, as well as with government regulators. Based on the feedback and insight from those meetings, a more advanced Ultera device will be completed so that it can fit under the hood of a car and overseen by the vehicle’s control system.

The refined Ultera prototype, which will be tested in an upcoming phase 3, will be a true showcase for the system, while providing a basis for accurate costing. Tecogen assumes that it will take about 1.5 years to develop a finished product.

In addition, early 2017, Tecogen began a research program, funded by the Propane Education and Research Council (PERC), to demonstrate the effectiveness of the Ultera emissions systems on propane fueled fork trucks. 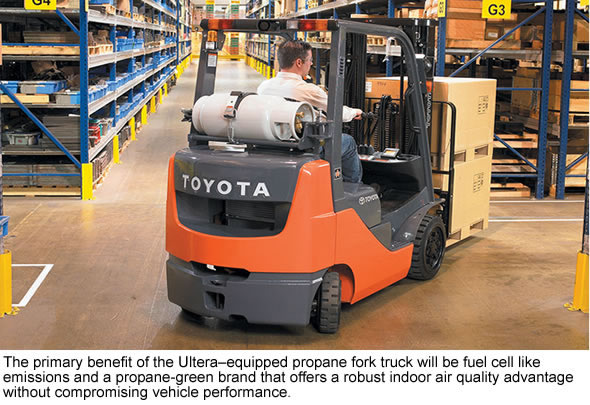 The program’s main goal is to develop a retrofit emissions technology for fork trucks to reduce their emissions to levels more acceptable for air quality in indoor work environments. A few months ago, baseline testing of the unmodified fork truck was completed utilizing a donated fork truck from a major manufacturer that has expressed strong interest in Ultera and has agreed to assist with Tecogen’s research effort. The test data effectively indicates that the fork truck is an excellent fit for the Ultera technology.

At this time, the Company has completed modification to the fork truck associated with the Ultera retrofit. Testing was expected to begin once the system was operational with executives from the manufacturer that donated the fork truck and PERC anticipated to visit soon thereafter.

To further finance the development of the revolutionary Ultera emissions technology for automotive and fork truck applications, Tecogen will attract third party investors. According to the Company’s management, they already have several investors lined up to participate is this new endeavor.

Laboratory testing of the Ultera system has shown dramatic reductions when paired with gasoline-powered light-duty engines. The Company is also spearheading the development of the technology for propane-powered fork trucks and similar equipment. Continued positive developments in any of these markets is bound to generate tens, if not hundreds, of millions of dollars in earnings for Tecogen.

Next to Tecogen already being a solid, well-established, and profitable Company, this is clearly the blue sky – but realistic – potential. Recommendation BUY.

An important note for our European readers is that Tecogen is now also listed on the Stuttgart Stock Exchange under the ticker 2T1.