Tecogen (TGEN – $3.73), which designs, manufactures and installs industrial and commercial cogeneration systems, reported a positive net income for the second quarter in a row.

Most of the product revenue in the quarter was in cogeneration sales with key repeat customers. The Company also saw impressive growth in service revenue due to increases in installation support accessories.

The Company’s sales backlog of equipment and installations as of March 21, 2017 was $15.6 million, well above the Company’s stated goal of maintaining sales backlog above $10 million. The current backlog is a good mix of our core product segments, such as multi-unit residential, hospitality, education, healthcare, and industrial applications. Note that the backlog does not include service contract revenues, or sales of TEDOM products by the TTcogen joint venture.

2016 was a remarkable year for Tecogen on many fronts.

First, the Company strengthened its core product offering with the introduction of the InVerde e+ CHP system, which offers the best performance and economic benefits of any other CHP system in its class. In addition, the new cloud-based monitoring capability, using the GE Equipment Insight system, was introduced. This gives both customers and Tecogen service experts the ability to monitor and analyze equipment performance in real-time. It also gives customers a portal and dashboard to instantly view savings and operating metrics that reinforce the equipment’s value proposition..

Second, Tecogen entered into an agreement to acquire American DG Energy, which, subject to shareholder vote and SEC approval, will create a vertically integrated company with dependable annuity type revenues, adding to the existing revenue streams of Tecogen.

Third, the Company acquired the outstanding minority interest in heat pump company Ilios Dynamics in an all-stock transaction that brought the high efficiency water heater line into the Tecogen product family, rounding out the product offering.

Finally, Tecogen made remarkable progress with its Ultera emissions technology in three areas.

Speaking about the results, co-CEO Benjamin Locke noted, “2016 was a tremendously productive year for the Company in terms of technology development, sales and marketing improvements, business development activities, and most importantly financial performance. This trend establishes the groundwork for continued success in 2017.” 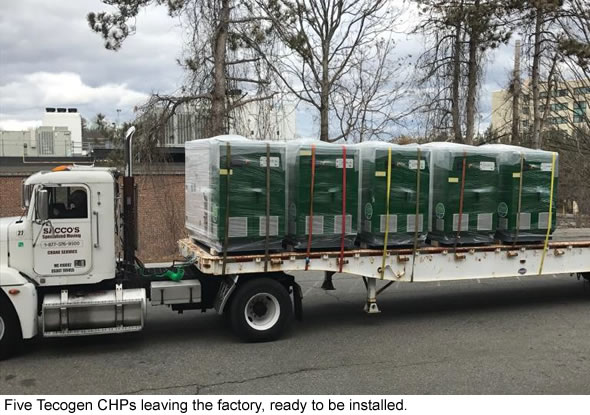 Product revenue grew 144% to $3.2 million over the prior year comparable quarter. For the full year 2016, product revenue grew 6.6% year-on-year to $10.7 million. Growth was particularly driven by sales of chiller and heat pump equipment.

Tecogen’s balance sheet remains solid. The Accounts Receivable did increase with about $3.3 million. That was due to several large shipments of equipment that took place right at the end of the year. Mr. Garrison, Tecogen’s CFO, mentioned during the fourth quarter conference call that a large portion of the increase has already cycled back through.

In addition, the team made material progress in developing the Ultera emissions control technology for new market verticals.

In the fourth quarter, product sales and service sales increased 144% and 32% respectively, which led to the highest quarterly revenues in the Company’s history. This strong increase in sales lead the Company toward profitability in the last 6 months of the year.

Finally, the operations and executive team executed a number of strategic transactions – including the acquisition of Ilios minority interest, the launch of the TTcogen joint venture with TEDOM, and the planned acquisition of American DG Energy – all of which set the stage for Tecogen’s next chapter of profitable growth.

The targets of the Company for 2017 and beyond are strong. Management continues to focus on delivering gross margins in the 35% to 40% range, maintaining the backlog and installation sales above $10 million, and delivering stable operating expenses of approximately $10 million on a yearly basis. Buy recommendation.