Revaluation of Chibougamau Mining Camp is Good News for Globex

The Chibougamau mining camp, owned by Chibougamau Independent Mines Inc. (TSX-V: CBG), consists of several distinct project sites, which are located within the Abitibi, approximately 15 kilometers from the town of Chibougamau, in Quebec, Canada.

The camp, which totals 10,349 hectares, includes five former mines, two unmined deposits (one copper-gold, one zinc-gold-silver) the down dip of three former sizable producers and a large exploration position, which includes numerous under explored drill intersections of copper and/or gold.

This large land position is considered to be at an “advanced stage” of exploration, being located for the most part on the inferred lateral and depth extensions of the better copper-gold producers of the mining camp as well entirely encompassing over 50% of the camp’s former copper/gold producers as well as a large vanadium, iron, titanium deposit (optioned to Vanadium One Energy Corp.).

Chibougamau keeps advancing the projects in the mining camp. Most recently, drill results from two of its properties were announced, which gave a better understanding of the area, and in fact justified a significant revaluation of the asset.

In January 2017, Chibougamau announced the results of two drill holes on the C3 copper-gold zone of its Bateman Bay mine, one of the five former copper‐gold mines.

Interestingly, over the 90 meter down dip distance between the two new drill holes, the width of the mineralized zone and gold grade have doubled, while the robust copper grade has remained constant. This is significant in the overall context of the Chibougamau mining camp.

Historically the mining camp has produced approximately 45.35 million short tons of copper ore grading 1.74% copper and 2.24 g/t gold. Using historic metal prices from the 1950s – when most of the mining was conducted at Chibougamau – of USD $0.436 per pound for copper and USD $60.48 per ounce for gold, the total value of the production would be about USD $0.88 billion. Approximately 22.4% of the revenue being generated from gold, making it a secondary mineral.

Using today’s conservative prices of USD $2.50 per pound for copper and USD $1,150 per ounce for gold however, the total value of the production would be USD $7.71 billion with gold contributing 48.8% of the value.

Consequently, the mining camp must now be considered a copper-gold mining camp rather than a copper mining camp, with emphasis placed upon the long-ignored gold potential in addition to the historic copper focus.

New line cutting and a geophysical survey are being prepared at the Bateman Bay project, which should help to plan additional drilling. In addition, a team of three very senior geologists including a structural geologist have been working to apply modern exploration concepts to guide further exploration across the camp. Already, a significant reinterpretation of the geology of the Berrigan zinc, gold silver property and mineralization has been advanced as well as new concepts as regards to a number of other mineralized zones and properties including Grandroy Mine (copper, gold) and Coco Creek Mine (copper, gold). A five month intense program of compilation, structural studies, mapping, stripping, and geophysics is planned. 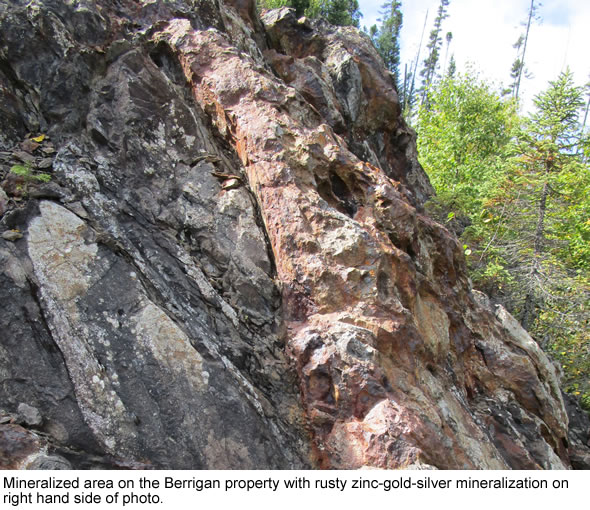 In addition, last month Chibougamau announced the results of five drill holes from its Berrigan zinc-gold-silver property, which is also part of the Chibougamau mining camp.

All five holes intersected multiple mineralized zones at shallow vertical depths including individual assays of up to 11,34% Zn, 10,36 g/t Au and 83,00 g/t Ag over varying widths.

The Company was very encouraged by the wide spread zinc, gold and silver assays. In fact, the team is studying the new results in combination with the historical drilling in order to design the next exploration program.

In total, Chibougamau Independent Mines owns approximately one half of the area of the mining camp including numerous underexplored areas with mineralization in drill holes and on surface. Most of Chibougamau Independent’s assets have only been drilled to a shallow depth including the wholly owned mine assets, leaving plenty of potential for additional discoveries.

More in-depth work is clearly warranted on this large land package. The next five months, three geologists will conduct work on the Chibougamau mining camp on almost all of the projects to get a better understanding of the mineralized zones.

All of this is excellent news for Globex Mining, as it has a 3% Gross Metal Royalty on all Chibougamau properties.