Tecogen (TGEN – $4.05) was awarded a research grant from the Propane Education & Research Council (PERC) to fund the development of its Ultera technology for the propane powered fork truck market. The grant covers testing and development of a prototype solution in conjunction with PERC and two fork truck manufacturers.

Ultera is a fully patented muffler-like kit that dramatically reduces a natural gas powered engine’s harmful emissions of NOx, CO, and hydrocarbons. It was developed several years ago and has since been installed on hundreds of cogeneration systems where it functions impeccably. There is no comparable technology on the market today.

The goal of this project is to develop an Ultera system that can be used on propane powered fork trucks. While these are very versatile in use – contrary to its electric and diesel powered competitors – their emissions are harmful to the driver and co-workers when used indoors or in poorly ventilated locations.

Testing, most of which will be conducted in-house, will begin soon. Tecogen hopes to share further details about the project when it releases its financials for the third quarter of 2016 on Thursday, November 10, 2016.

The Propane Education & Research Council is a nonprofit organization established, operated, and funded by the propane industry. The only energy council of its kind, PERC educates consumers about propane’s many uses and benefits, leads safety and training efforts among propane retailers and consumers, and drives technology development to expand adoption of propane as a clean, affordable, American-made energy source.

“Fork trucks are often used inside large warehouses where indoor air quality is a serious concern. Eliminating pollutants from vehicles operating indoors is important to the fork truck industry and their customers,” said Robert Panora, Tecogen’s President, Chief Operating Officer, and one of the inventors of the Ultera system. 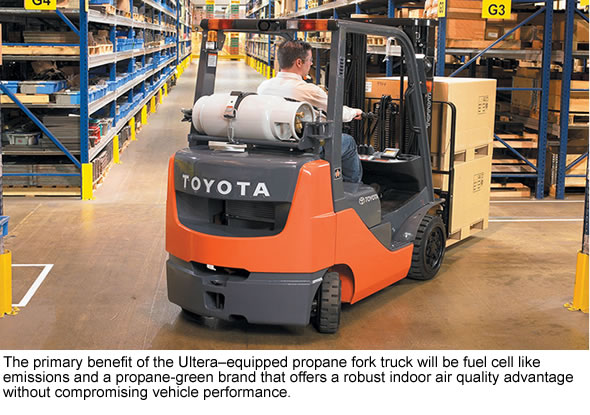 The Benefits of Propane for the Fork Truck Market

Demand for fork trucks is at an all-time record high in North America and expected to continue to grow according to the Industrial Truck Association. In 2015, total retail orders in all classes, excluding exports, totaled 225,534 units. It was the first year that lift truck sales were higher than the industry’s pre-recession level of 215,000 units in 2006. Globally, over 1 million units were sold in 2015 with North America being the predominant market.

Breaking down the sales results, 63% of all lift trucks sold in North America were electric, with the remainder being engine-powered (diesel and propane) lift trucks. Looking at the worldwide market, 45% of sales are electric. Especially in emerging markets, customers prefer engine-powered lift trucks.

Electric fork trucks have been making significant in-roads the past few years, mostly because of their green image and indoor air quality benefit.

However, propane and diesel powered fork trucks offer distinct benefits over electric-powered vehicles including lower initial purchase costs, little risk associated with running out of fuel, and better performance than most electric forklifts when the application requires high or constant duty drive line torque. In addition, in many cases electric forklifts meet performance issues when exposed to cold, wet weather.

The primary benefit of the Ultera–equipped propane fork truck will be fuel cell like emissions and a propane-green brand that offers a robust indoor air quality advantage without compromising vehicle performance.

Broadening Use of Ultera

Ultera was initially developed with the objective to bring emissions from natural-gas powered engines and CHP systems into compliance with California’s emission standards. Tecogen succeeded, and Ultera has proven incredibly effective at nearly eliminating emissions of nitrogen oxides (NOx), carbon monoxide (CO), and non-methane hydrocarbons for a variety of engines. No other technology achieves similar results.

More recently, Ultera has been adapted for other applications, such as biogas powered engines, and is being studied for other mobile engine categories, including the gasoline automotive market.

This grant award is yet another demonstration of Tecogen pushing Ultera into new applications. Hundreds of thousand propane driven fork truck units are sold each year. Consequently, the fork truck market represents a significant opportunity for Tecogen to build upon its prior successes with the Ultera system.

Another major advantage is that select industry-leading fork truck manufacturers are participating in the research initiative. This indicates that there’s a real need and willingness to find and implement a solution. Buy recommendation.