Especially Westcott, the school, home and office products brand, continued to outperform. In fact, this year had the best back-to-school performance in the Company’s history. The brand again gained market share in the scissors and pencil sharpeners categories. And its ceramic box openers were an instant success.

Also, the new ergonomic Ergo Jr. kid scissors were well received. As we mentioned last week, we expect a lot more from them during next year’s back-to school season. In addition, the new Westcott Carbo line of scissors and trimmers, with a carbo-titanium coating, exceeded expectations. 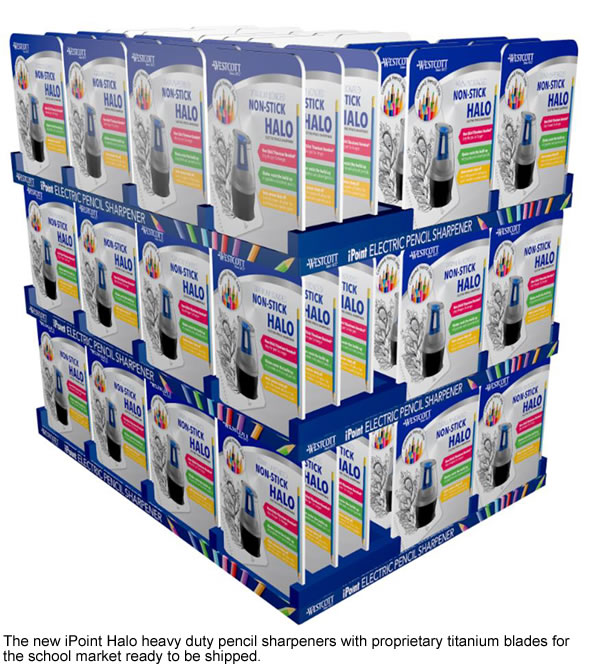 Another strong performer was the first aid business, which continued to gain market share, particularly in the industrial and food service segments. For example, there are now SmartCompliance kits in 8,000 McDonald’s restaurants in the United States. And earlier this year, Wal-Mart equipped each store, warehouse, office, and truck with a first aid kit from Acme United. An added bonus to first aid sales is that they’re recurrent as products have to be reordered so that supplies never run out.

The Clauss, Camillus, and Cuda brands added new products and customers. Clauss, for instance, introduced new high performance shears with a carbo-nitrite coating. And Camillus hunting knives sales benefitted from new distribution in the camping area. Finally, sales at DMT, which was acquired in February of this year, increased more than forecast due to successful placement of the sharpeners in Acme’s existing global distribution network. Also Acme’s online sales, especially at Amazon, continued to increase rapidly.

As for 2017, Acme’s Chairman and CEO Walter C. Johnsen mentioned during the third quarter conference call that it was a bit too soon for exact projections, but he expects a continued strong performance for the Company.

Amazon.com is quickly becoming one of Acme United’s most important customers. The Seattle based e-commerce giant will be Acme’s fourth largest customer in 2016, but Mr. Johnsen mentioned that it might move up to become the number three, or even two, as soon as next year.

In addition, the Company is working with Amazon on a number of projects to improve sales of first aid refills and SmartCompliance kits.

In Europe, the importance of Amazon.de – the German sister website of Amazon – is significantly growing as well. Part of the DMT product range was recently introduced there and has quickly moved to the top of the retailer’s search results thanks to good ratings and feedback.

Amazon is an increasingly important customer for Acme United. We wouldn’t be surprised if it became Acme’s largest account in a few years.

Exact revenues per segment for the second quarter will be available in the 10-Q, which will be filed mid-November. However, Acme announced for each segment the percentage by which revenues increased or decreased compared with last year’s third quarter. Based on those numbers, we can give a fair estimation.

In the U.S. segment, net sales for the quarter ended September 30, 2016 increased 9% compared to the same period in 2015 due to strong sales of Westcott school and office products, and first aid kits. DMT contributed $1.3 million in sales in the third quarter, and $3.6 million since February 2016. Net sales for the first nine months of 2016 grew 15% over the comparable period in 2015.

The Company’s long-term debt less cash on September 30, 2016 was $33.4 million compared to $23.9 million on September 30, 2015. By year-end, that number is expected to decline to about $29 million. This will mainly be achieved by a reduction of bank debt as inventories return back to more normal levels after the back to school season.

During the twelve-month period ended September 30, 2016, the Company paid approximately $7.0 million for the acquisition of the assets of DMT, spent $1.4 million on stock repurchases and paid $1.3 million in dividends on its common stock.

At the end of the third quarter of 2016, Acme had close to $60 million in working capital and an impressive current ratio of 5.42.

Acme United’s brands excel across the board. The guidance for 2016 was increased for the second quarter in a row!

Meanwhile, new products are constantly being introduced, which lays the groundwork for continued growth in 2017. Westcott, for instances, is offering new school, home and office products, such as glue guns with ceramic coatings that are ideally suited for the craft, office and shipping work places. It has new heavy duty pencil sharpeners with proprietary titanium blades for the school market and it’s expanding the line of ceramic box cutters for heavier duty use.

Moreover, the first aid division introduced an app earlier this week at the National Safety Council Show in Anaheim, California, which allows customers to reorder first aid supplies in a quick, convenient and user-friendly matter. It received lots of positive responses at the conference and will be implemented in 2017.

Clauss, Cuda, Camillus and DMT products will continue to benefit from expanded distribution in the mass market and specialty stores. For Cuda, new freshwater fishing tools will be launched and several product line extensions, such as carbon fiber gaffs and nets, will be introduced.

On top of all that, Mr. Johnsen again indicated that the Company will be looking for more accretive acquisition candidates in 2017.

The Company continues to execute very well. Distribution is gained both online and off, gross margins are above 35%, the balance sheet is very healthy, and the dividend is increased every six to eight quarters. Buy recommendation.