The strong rise in revenue was driven by both product and services related sales. Total services related revenues grew 43.8% over the prior year period, driven by installation activity. Product revenue grew 23.9% compared to the first quarter of 2016, due to the tremendous success of the Company’s flagship product, the InVerde e+ CHP. The technical superiority of the product is ever more recognized by Tecogen’s customers, such as engineering companies, ESCOs, and product developers.

Net income for the quarter ended March 31, 2017 was $44,787 or $0.00 per diluted share, compared to a loss of $893,168 or $0.05 per diluted share for the comparable period last year. Another excellent achievement, especially knowing that this is Tecogen’s third straight quarter of profitability.

Moreover, gross margin improved 25.7% in the quarter, bringing it up to 42.6% compared to 33.9% in first quarter of 2016, and above management’s targeted 35-40% gross margin range. The increase in gross margin was the direct result of cost control initiatives and product upgrades.

Finally, the Company’s sales backlog of equipment and installations currently stands at $17.5 million driven by strong traction in the InVerde product line. The number is well above Tecogen’s goal of maintaining sales backlog above $10 million.

Note that the backlog does not include service contract revenues, or sales of TEDOM products by the TTcogen joint venture. Mr. Ben Locke, Tecogen’s Co-CEO did mention during the first quarter conference call that the backlog at TTcogen is approximately $710,000.

Commenting about the quarter, Tecogen Co-Chief Executive Officer Benjamin Locke noted, “The first quarter of 2017 is the third straight quarter of profitable operation for the company. This is a direct result of the hard work completed in 2016 on cost controls, product improvements, and strategic sales partnerships. We are very pleased with these results, and hope to continue this trend throughout 2017.” 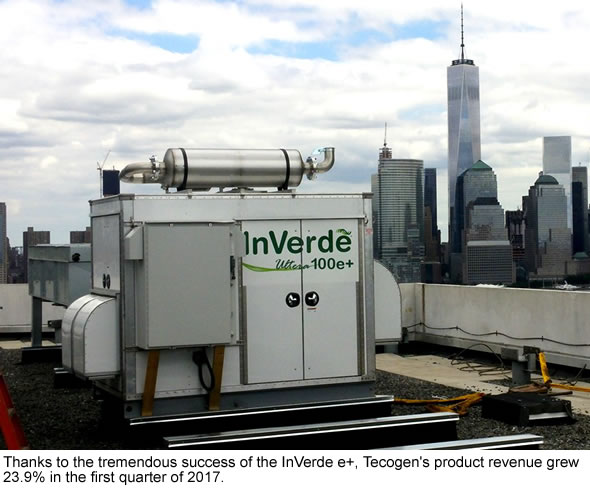 Product sales grew by 23.9% in the first quarter of 2017 over the prior year comparable quarter. Higher cogeneration product sales more than delivered the entirety of the growth in product revenues, partially offsetting a year-on-year decline in chiller and heat pump sales. Variations in product mix are typical from quarter to quarter as customer orders for different products are not entirely predictable.

Services revenues grew 43.8% year-on-year, benefiting from increasing penetration in service contracts and favorable operating metrics for the installed fleet as well as an active period for installations work. This was the 17th consecutive quarter of year-over-year quarterly service revenue growth. Continued penetration of the Company’s ‘turnkey lite’ offering, which includes custom value-added engineering design work as well as custom factory engineered accessories and load modules, has been a strong source of services revenue growth and is expected to continue to develop as an important revenue stream.

Total cost of sales in the first quarter of 2017 was $3,932,094 a rise of only 17.2% compared with the same quarter last year. Another remarkable achievement, knowing that total revenues increased by almost 35%.

Services gross margin improved to 46.1% in the period compared to the 35.8% in the same prior year period. Services gross margin grew thanks to continued cost control as well as increasing penetration of the Company’s high-margin ‘turnkey lite’ offering on the installation side.

The decline in cash and cash equivalents can be more than attributed to the surge in accounts receivable from $5.89 million a year ago to $9.10 million at March 31, 2017, along with the modest rise of inventories of $0.77 million.

Overall, Tecogen has a solid and improving balance sheet.

The fully-patented Ultera system is a muffler-like non-invasive emissions control technology for natural gas powered engines proven to bring emissions of harmful criteria pollutants (NOx, CO, and hydrocarbons) down to near-zero levels. Producing low emissions on par with fuel cells and fully in compliance with the air quality standards set by the California Air Resource Board, the strictest standards in the world, the Ultera technology has been independently verified as effective by New Jersey’s Department of Environmental Protection and by AVL California Technology Center.

In October 2015, in light of the Volkswagen emissions crisis, Tecogen formed an Emissions Advisory Group to evaluate the application of its Ultera emissions control technology to the gasoline vehicle market. In order to pursue this massive opportunity, Ultra Emissions Technologies Ltd (ULTRATEK), a joint venture with a group of strategic investors, was founded to test, verify and develop the Ultera system for gasoline powered automotive engines.

Results from Phase I and Phase II testing of Ultera on vehicles indicated that the system is highly effective at delivering emissions reduction in criteria pollutants (those contributing to smog and negatively impacting human health) in excess of currently available commercial technology. Also very important to know is that consistent with the experience of the Ultera in stationary industrial applications, the system did not increase the fuel usage of the test vehicle.

Last month, this test data was presented at the prestigious SAE International World Congress in Detroit, MI and was very well received. Subsequently, discussions have been initiated with potential automotive partners. More news from these initiatives is expected later in the year.

Meanwhile, two additional Ultera related patents have been awarded, while filing recently for three others specifically involving the integration of the technology to gasoline vehicles.

Also, in October 2016, Tecogen was awarded research grant funding from the Propane Education & Research Council (PERC) to develop the Ultera technology for propane powered fork trucks. This could be another lucrative opportunity, knowing that 70,000 propane powered fork lift trucks are sold each year in the United States alone.

During the past few months, testing was initiated utilizing a donated fork truck from a major manufacturer that has expressed strong interest in Ultera and has agreed to assist the Company with the research effort.

Finally, Tecogen received the California Air Permit for a stationary standby generator system retrofitted with the Ultera emissions technology. The installation of the Ultera kits on the generators is being completed, and commissioning is anticipated in the third quarter of 2017. If successful, this could be another huge market opening up for the Ultera technology.

Consequently, we expect 2017 to be a very successful year for the Company, as its systems create energy efficiency, financial savings, and emissions reductions to many different types of products and applications.

The merger between Tecogen Inc. and American DG Energy, Inc. is nearing its final stage with the acceptance of the registration statement by the SEC. Once the merger is ratified by the stakeholders of both companies, the combined entity will soon thereafter become a fact.

The expected completion of the ADGE acquisition will create a completely vertically integrated clean energy company with strong recurring revenues, which will supplement Tecogen’s existing revenues. This will add steady revenue with good margins to the financials of Tecogen, helping to offset some of the peaks and valleys of products sales. In 2016, ADGE made substantial improvements to the operational and financial production of their installed fleet. As a result of the merger, further improvements to the fleet are possible, which will provide more revenue and improved operating margins.

Moreover, the emissions program for the fork truck and automotive markets is steadily progressing and creates substantial upward potential for the Company’s stock price.

Tecogen has the best in class technology, a sophisticated and informed customer base and game-changing emissions technology. In addition, its key financial metrics such as revenues, margins, and backlog are turning in the right direction.

This is clearly an exciting time for Tecogen and its shareholders. Recommendation BUY.