In June, it signed a deal with Merom Farms to produce wasabi-based products. And this week EnWave granted Perdue Foods LLC the exclusive right to use the Company’s Radiant Energy Vacuum (REV) dehydration technology to process pet food and pet treats in the United States and Canada.

In return, Perdue, a leading food and agricultural products company, has ordered a 10kW REV dryer, which it will receive in the coming weeks. In addition, Perdue will pay EnWave a quarterly royalty on sales of REV produced products. Typically, royalty streams range between 2% and 10%.

In order to retain its exclusivity, Perdue must purchase a 100kW or larger REV machine from EnWave within a specified timeframe.

Very interesting to know is that Perdue has a subsidiary, named Full Moon Pet Treats, which is already very successful in selling pet foods across North America.

The brand separates itself by offering pet foods that only contain human grade meat, which is approved by the U.S. Department of Agriculture (USDA). In addition, the pet treats are produced without the use of artificial colors, preservatives, and fillers like corn, wheat or soy. 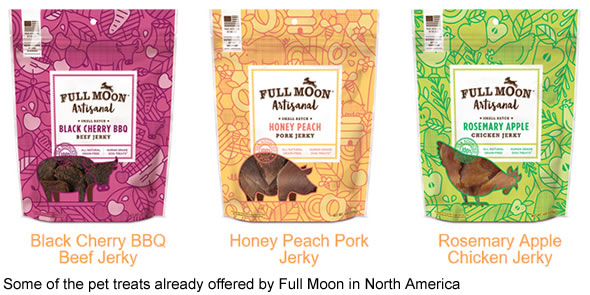 Perdue is the third-largest chicken processing company in the United States. The Salisbury, Maryland based company generates annual sales in excess of $6 billion and employs approximately 19,000 people.

The company was founded in 1920 by Arthur Perdue and started out by selling eggs. It soon built its first hatchery and later expanded into agribusiness and introduced the PERDUE brand of chicken and turkey.

Today the Company remains family owned and family operated. Its offerings include some of the leading names in natural chicken and turkey, such as the Perdue, Harvestland, Coleman Natural, Coleman Organic, Rocky, Rosie, And The Original Brat Hans brands

The fact that these tests lasted over a year, indicates that they were conducted very thoroughly. Moreover, because Perdue is now willing to spend more money by buying a REV dryer, we’re convinced that market tests went very well. In fact, we wouldn’t be surprised if they already had some distribution lined up.

The agreement with Perdue is yet another one with a Tier 1 player that has gone through an extensive product development phase and that feels that there’s a tremendous opportunity in its market. This is the second royalty-bearing agreement for EnWave with a major meat processing company.

And this is just one of many partners with which EnWave aims to close commercial agreements in the near future. For example, Ocean Spray Cranberries and California Grape Co in the dried fruits market. And Maple Leaf Foods, Jack Link’s, and Campofrio Food Group in the meat snacks category to name a few.

The agreement with Perdue could become another successful one. Full Moon Pet Treats already has lots of experience with producing pet foods and it has substantial distribution in North America.

More and more investors are discovering EnWave and are realizing what a beauty this Company truly is. As we mentioned last week, once the stock price passes the $1 mark it could go fast. Meanwhile, the stock is trading at $1.15, up almost 14% compared with a week ago. This doesn’t mean however that it’s too late to buy EnWave shares. In fact, the Company has only just started its conquest of the dehydration market. Buy recommendation.