Shareholders of Renforth Resources Inc. (CA:RFR – $0.05 & US:RFHRF – $0.03 & GER:9RR – €-.–) did not have to wait long for the next round of exploration to commence at the 100% owned New Alger property in Quebec. Recall that as 2019 was drawing to a close, the Company reported a new gold discovery from a preliminary drilling program focused on several target zones.

Gold was encountered in each of the 10 drill holes, and some very attractive intervals were highlighted that demanded follow up. This included a promising band of sericite alteration with elevated gold grades, a setting that had not been encountered previously within the project area. The Sericite Zone is located to the north of established gold deposit areas related to the Cadillac Break structural corridor.

The prolific endowment of gold resources along this segment of the Cadillac Break is well documented. Five gold mines have been developed within a few kilometers of the New Alger property, including the past-producing Thompson-Cadillac mine located within the project boundary. Identifying gold deposit areas around this historic mine is an obvious target for Renforth. However the success to encounter new gold zones in previously undetected geological settings adds another intriguing element to this exploration story.

In addition to previous work programs completed within the New Alger property area, geological data is available from other projects in close proximity. The Renforth exploration team is establishing a thorough understanding of the geology of the project. For example, the Pontiac Sediments in the area are known to host mineable amounts of gold, most successfully at the Canadian Malartic Mine nearby.

Renforth took a very old, and one of only a few, geological maps which indicated mineralization in the sediments at New Alger on high ground, and in a few spots at the adjacent O’Brien Mine to the east, and followed up on this information. This led to the finding the “Discovery Veins”, a high profile and growing gold enriched zone on the property.

In fact, the Discovery Veins are not unique, Renforth has found several other instances of quartz veining in the sediments to the north and the south of the Discovery Veins, in some cases guided by historical drill information from next door.

Several distinct rock units are stacked at various depths below surface, including sedimentary horizons near surface and ancient granitic units further to depth. The Cadillac Break structural corridor has served as “the plumbing system” for the entire district. Intense heat, pressure and subsurface fluid circulation contributed to the formation of gold deposits in fractured host rock along the structure. Extensive vein systems, along with splays and offshoots, have been defined throughout the strike length of this regional structure, with rich gold deposits established.

Within the large property area Renforth controls at New Alger, the Company is advancing exploration to prove up a larger gold resource. Past drilling work validated this potential. Entirely new target areas were also identified. The next phase of drilling has already commenced to follow up on this initial success.

A total of 2000m of drilling is planned during this current round of exploration. The focus is directed to the west of the historic Thompson-Cadillac mine, in the central part of the property. The first three drill holes are expected to reach 500m each. These will be targeting the discovery area north of the Cadillac Break and continue towards the south, under the known mine area mineralization, ending in the sediments. As the drill core is pulled from these holes, the geologists will interpret new information and then choose where to focus the remaining portion of the drilling budgeted in this program. 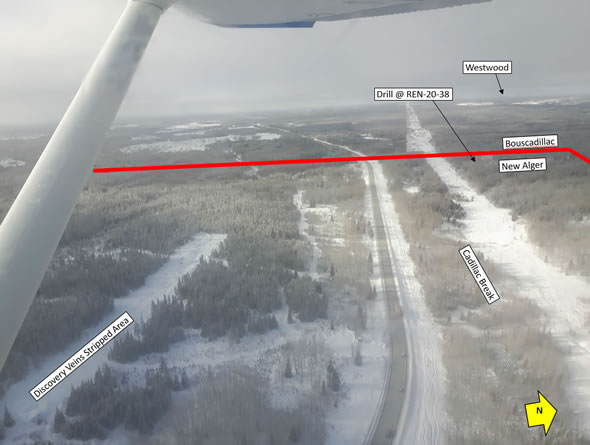 Areal image of New Alger. The red line indicates the western end of the property and the arrow shows where the first hole in the current program (REN-20-38) was sunk.

Consider that one of the new discovery zones, encountered by the Company during the drilling completed late last year, was located at depths of 150-250m below surface. With this follow-up round, Renforth is expected to intercept the vein system further to depth. Perhaps new discoveries may be encountered in these deeper drill holes.

Visible gold, characteristic of high grade intervals, has already been reported from previous drilling work at New Alger. The favorable prospect of identifying similar sections in the current round would prompt the remaining drilling to be concentrated in these high profile sections. It is this capacity to react on the fly, focusing on the most promising discovery zones, that defines the effective strategy of the junior explorers.

With the urgent pace to this exploration strategy, Renforth has established itself as one of the most active junior explorers in Canada, and the New Alger property as one of the top discovery prospects in Quebec.

The primary objective of this exploration has been to add to the established gold resource, in proximity to the Cadillac Break. However, Renforth expects that new gold bearing zones may continue to be highlighted as work continues in previously unexplored areas. The potential for additional targets to be defined outside of the well-known gold zones on the property adds to the excitement for this story.

If the Company is able to deliver further success from this work, the profile of this emerging gold deposit area in one of the hottest mining districts in Canada will attract further attention. With a market cap that may be considered in the bargain range at the present, the prospects for steady news flow from New Alger will be a catalyst to move this stock higher.

Meanwhile, Renforth is now also listed on the Frankfurt exchange with ticker 9RR, making is even more convenient for European investors to purchase the stock. Smallcaps Recommendation: BUY.