Recall that work continued at the Surimeau property into the late stages of last year. It is no surprise then that Renforth Resources Inc. (CA:RFR – $0.07 & US:RFHRF – $0.06 & GER:9RR – €0.05) has started off 2022 with an announcement of assay results from a program of fieldwork. And the results are even better than expected! The Company reported a cluster of assay data for grab and channel samples extracted during the surface stripping program at a portion of the Victoria West target area. 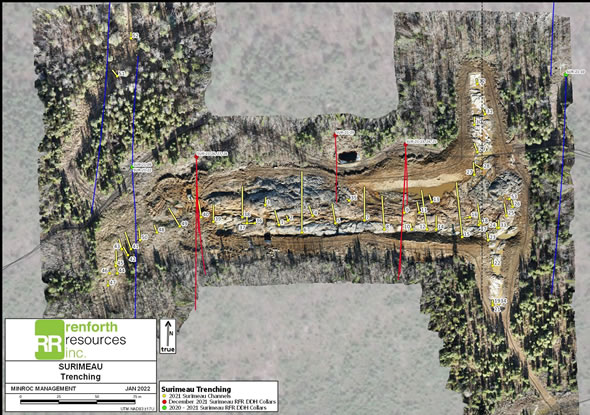 The stripped area at the eastern end of Victoria West. The trenching channels are clearly visible in yellow, while the red drill holes, drilled in December 2021, will test for mineralization a bit deeper than the prior drilling (blue). View full size image

Stripping of surface overburden, which measured up to three meters in depth, was completed during the initial phases of work to expose the altered host rock. Consistent nickel-cobalt mineralization was revealed extending across a large portion of the surface area. However, the surface sampling work did indeed reveal one surprise that was not expected. Areas were identified through this work enriched with copper and zinc as well. The highlight channel sample featured a 12.9m section bearing 0.121% nickel and 0.013% copper. A subinterval of 5.5m within this section was mineralized with 0.43% copper and 1.63% zinc.

Earlier drilling programs had also yielded core sections bearing enriched levels of copper and zinc. This has been interpreted as a secondary phase of volcanogenic massive sulphide alteration active in the system that is distinct from the ultramafic intrusion hosting the enriched nickel-cobalt mineralization. Given the distribution of mineral content now confirmed through the surface sampling program, it appears that some overlap of these two mineralized systems is occurring locally at Victoria West. Several of the channel samples delivered higher values of copper and nickel within the same alteration indicating that the systems ‘mix’ in the contact zones where they overlap.

At this stage of the exploration program, the actual grades of the polymetallic mineralization are encouraging but it is the setting of this emerging deposit that holds promise to build additional value. Wide zones of continuous mineralization starting from surface, as exposed through the stripping program, provide the opportunity for the lowest cost bulk mining scenario. There are many factors to consider in terms of estimating economic potential for any discovery, however the distribution of a mineralized system along a continuous strike length, with a large surface area outlined bearing lower grades of high value base metals content is certainly attractive.

The presence of access roads and a major hydroelectric transmission line running through the property also provide a stronger economic outlook for the project. Moreover, a large smelter is located just 70kms from the project area. Given the combination of positive factors, in addition to the near surface extension of the emerging deposit area, the grades reported from the channel sampling appear to have a much more viable potential.

Within a large mineralized system it is common to encounter areas of lower grade resources in proximity to enriched zones of higher grade mineralization. While the results from Victoria West have been enormously encouraging, the project is currently still in the early stages of exploration. It may well be confirmed, as work continues, that higher grade zones of mineralization are revealed along strike and further to depth. If so, then this lower grade area outlined so far will become part of a much larger mineral resource with compelling economic potential. However, if the extent of Victoria West amounts to a larger tonnage with similar grades that have been reported from these earlier stages, then the potential for an economic development also remains intact.

More Cash in the Bank

Late last month Renforth announced that it had finished work with the late season drilling program at Victoria West. Just over 1200m of total drilling work was completed in seven diamond drill holes. This program was launched following the stripping and sampling effort. Visual inspection of the mineralized corridor demonstrated the attractive alteration as highlighted this month in the assay results. Renforth determined this warranted proceeding with a rapid follow-up to test the potential further to depth. Drill core samples have been submitted for assay and will be reported as they are received.

The Company also reported that it had completed two a small private placements. Renforth issued a total of 15,750,000 flow through units plus a further 14,000 common share units to raise a total $1,576,260 in this offering. Flow through financing is attractive because it provides Canadian investors with added tax write-offs. This enabled the Company to complete the offering at a price of 10 cents per unit, representing a significant increase compared to the market price of the shares at that time.

The pace of activity in the field typically winds down during the winter months. Snow accumulation often makes it more difficult to access properties. However Renforth is using this pause in fieldwork to plan the next moves for Parbec and Surimeau. Both projects offer strong potential for additional shareholder value creation.

With the successful completion of the surface stripping program at Victoria West, Renforth has now confirmed that a base metals system extends continuously at surface for a strike length of at least 275 meters. A focused drilling effort was launched to follow up in the same zone, for which assay results are now pending. Additional drilling programs elsewhere along strike have also demonstrated attractive mineralized intervals. The Company is already considering potential economic implications for this emerging deposit and the leverage to metals like nickel, copper and cobalt that are in high demand. The large mineralized area already outlined at surface in this emerging deposit certainly offers promise for a development scenario.

Meanwhile the successful exploration progress at Parbec contributed to the launch of a structural evaluation that may highlight new gold targets for further exploration. This potential is illustrated by the large gold deposit immediately adjacent to Parbec that bears a similar geological setting.

The financing activity from December has provided additional funding to support Renforth through the next round of work programs. The Company is well positioned to launch further exploration initiatives at both projects. The outlook to advance the Victoria West target area remains exceptional. Increasing demand for essential base metals will keep this dynamic project on the front burner. Renforth is ready to pick up activity in 2022 as it so successfully advanced throughout the previous year. Smallcaps Recommendation: BUY.