Much of the success achieved by Globex Mining Enterprises Inc. (CA: GMX – $1.14 & US: GLBXF – $0.91 & GER: G1MN – €0.79) in recent years has come from the advancement of mineral properties through exploration by partner companies. With a strategy that continues to the present, Globex has secured an enormous portfolio of undervalued property holdings. Many of these projects were subsequently transferred to third-party companies through option deals and partnership arrangements. Ongoing activity by these transaction partners has contributed substantial value for Globex shareholders as the properties are advanced. Recently, Globex reported updates for a number of projects held by transaction partners.

Perhaps the most notable of these was pertaining to the NewMetal project in Quebec. In June, 2019 a transaction was arranged to sell the NewMetal property to Starr Peak Mining Ltd [STE]. A subsequent deal was announced in August, 2020 to vend a cluster of adjacent property holdings. Globex had assembled these property claims to build leverage to the past-producing Normetmar and Normetal mines. High grade remnant resources from these operations, along with the potential to outline new deposit areas, attracted the interest from Starr Peak to resume exploration at this project. The deals involved more than one million shares of Starr Peak transferred to Globex in addition to cash payments. Shortly thereafter, aggressive exploration activity completed by Starr Peak revealed new mineralization is present around the old mine workings. The effort to build a much larger overall deposit continues.

Starr Peak remains committed to rapidly advance exploration work at the property. On two separate occasions the company has announced increases to the scale of the drilling program, as a result of the continual successful results achieved in the field. Steady progress has been achieved as new discovery zones expand the deposit area at NewMetal.

The appeal of the ongoing exploration at the NewMetal property is a function of the wide mineralized intervals that have been encountered bearing high-grade polymetallic resources. This week, Starr Peak reported another batch of high-grade assay results. The results were presented from eleven drill holes that were completed targeting the Upper and Deep Zones of the deposit. The Upper Zone refers to the deposit area from surface to a depth of 400 meters. Mineralization below that has been classified as the Deep Zone. Numerous sections of attractive mineralization have been reported from both deposit zones as work advances.

The highlight section from the recent results included an interval of 9.85m of drill core bearing an average of 8.98% zinc-equivalent (ZnEq) grade. This was encountered within the Deep Zone of the deposit area. Also from the Deep Zone, another drill hole encountered 5.14% ZnEq across an interval spanning 7.2 meters. Meanwhile, other sections of the drilling work encountered resource areas enriched with high- grade copper mineralization. One narrow subinterval of 2.05m with an average of 15.94% ZnEq included 2.99% copper content. A higher-grade section was also encountered within the Upper Zone, including 5.9m of drill core bearing an average of 6.04% ZnEq.

Drilling work at the project paused during the holiday season and is now slated to resume. The targets will continue advancing along a defined structural corridor more than four kilometers in strike length. Additional gold targets to the north will also be investigated. Starr Peak reports that a second drilling rig will shortly begin operating at the property. The aggressive pace of exploration work will generate steady news flow for the months ahead. All of this exploration activity is funded by Starr Peak. Next to the shares it owns of Starr Peak, Globex retains a 2.5% Gross Metals Royalty (GMR) on the NewMetal project.

Transaction partner Radisson Mining Resources Inc. [RDS] has been active furthering exploration at its O’Brien gold project located in the heart of the Cadillac Break mining camp. During an earlier transaction, Radisson acquired the adjacent Kewagama gold mine property claims to consolidate this additional land package to the east of the original O’Brien property. As Radisson continues advancing exploration on a comprehensive basis across this large project, established gold trends have been encountered extending across the Kewagama portion of the property area.

Previous drilling work had established structural gold trends cutting through the property. In September 2020, Radisson reported that the third high-grade structure was confirmed within the Kewagama portion of the project. Historical exploration data presented clues suggesting potential for a much larger system. The presence of wide intervals of gold-bearing alteration in recent drilling work supports this interpretation.

With the latest batch of exploration data, it now appears a fourth structural trend has been identified in this system, also extending through the Kewagama portion of the project. Within this Trend #4 Radisson reported higher grade assays including 31.56g/t gold over a 2m interval. A section of 2.4m from another drill hole encountered 13.83g/t gold. From Trend #3, Radisson delivered a 2m interval with an average grade of 15.68g/t gold. There was a large amount of sample data reported in this exploration update with many high-grade sections of note. 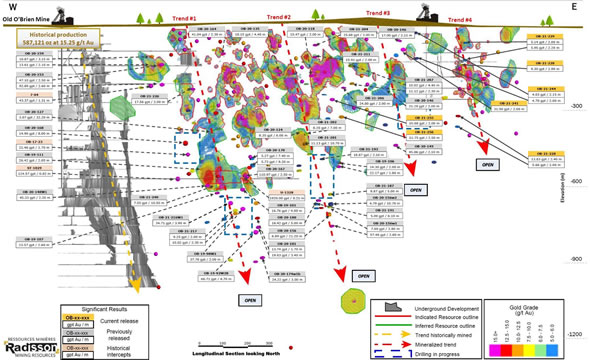 A large number of core samples are still awaiting assay. Visible gold was observed in some of these samples. Therefore the potential for additional news flow of high grade gold content remains a catalyst to build speculative interest in this story. Globex retains a 2% NSR on the Kewagama portion of the project.

An acquisition deal involving a partner company was also announced right before Christmas. Atlantic Mining NS Inc. has arranged a transaction to acquire all of the outstanding shares of NSGold Corporation. The objective of this deal is to secure ownership of the Mooseland Gold property, located in the province of Nova Scotia. Atlantic has offered a cash payment of $0.40 per share in this transaction. The deal is subject to shareholder approval with a vote scheduled in February.

NSGold originally secured this exploration project through an option deal with Globex back in 2010. Exploration work advanced at the project, funded entirely by NSGold. In September of 2020, NSGold announced a compliant resource for the Mooseland property that presented 523,000 ounces of gold. With the completed transfer of 100% ownership of Mooseland to NSGold in 2019, Globex was issued 1,745,408 shares in addition to cash payments earlier in the agreement. This position is valued at nearly $700,000 under the terms of the takeover deal.

Atlantic operates a producing gold mine in Nova Scotia in close proximity to the Mooseland property. Therefore much of the capital investment to fund development would be offset by the potential to operate Mooseland as a satellite mine within trucking distance to the established processing infrastructure. The enhanced prospect through this deal to accelerate potential mine development is therefore of great interest to Globex shareholders. Globex retains a 2% GMR on the Mooseland Gold property. Any gold production generated from the attractive Mooseland resource would contribute royalty income payable to the Company.

Similar to the situation in 2021, this new year has started off with very positive news items reported by Globex transaction partners. Exceptional drill core assay results continue to be presented by Starr Peak at NewMetal. Globex is building value in tandem through ownership of Starr Peak shares. The prospect that active mining may resume at the project in the future also presents the opportunity for Globex to receive a significant stream of royalty payments.

So too with the retained royalty held on the Kewagama property claims of the O’Brien project. The steady progress of exploration has delivered multiple new discovery zones that build the potential for to establish a new gold mining operation. High-grade gold trends have been encountered at the Kewagama section. A successful mine development involving these new trends would create a recurring revenue stream of royalty income to Globex.

Meanwhile, attractive value for Globex shareholders is also pending if the Mooseland Gold property acquisition by Atlantic is approved. Globex would immediately gain a cash payment of nearly $700,000 for its NSGold share ownership. The longer term outlook for a producing mine to be established at the property would also be enhanced. This too would open the potential for a significant royalty payment stream to commence.

Each of the projects highlighted this week was originally acquired many years ago at bargain levels by Globex. Subsequent transactions with partner companies generated cash and share payments to the Company up front. Now as the advancement of these properties continues, Globex may participate in the future value proposition for royalty income. The long term strategic focus to acquire properties and arrange successful partnerships is paying off once again. Smallcaps Recommendation: BUY.