Despite the drop in revenue, adjusted EBITDA and working capital both significantly improved for Q1 2019 with the Company generating a record amount of cash flow. Moreover, backlog was $26 million at the end of the first quarter of 2019 and stood at $26.9 million as of May 13, 2019. This compares quite favorably to the backlog of $16.6 million at the end of 2018.

During the quarter, Tecogen sold eight energy producing assets, which were originally purchased as part of the American DG acquisition, for $7 million. This resulted in a combined gain on sale of assets of $1,081,049 and cash proceeds from the sale of $5 million. Shoring up the balance sheet is imperative so that the Company can move forward in fulfilling its recently signed contracts, while simultaneously spending on R&D to introduce new product lines.

Benjamin Locke, CEO of Tecogen commented, “While we are disappointed with the drop in overall revenues, the first quarter saw good progress in terms of positioning the Company for future growth. The sale of some of our ADG assets in the quarter significantly strengthened our balance sheet by eliminating our debt and providing working capital to meet our goals. With sales of our Tecofrost product expected to start in the second half of the year, we are excited to see further market attraction to our chiller products as well as our core CHP products. In combination with promising results from our Ultera emissions technology, we are excited for our prospects for the rest of the year.” 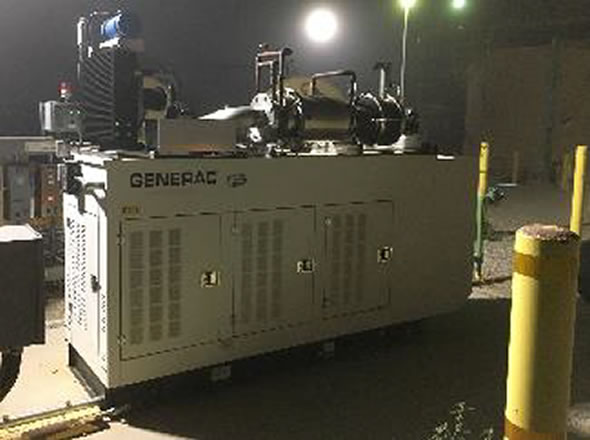 Tecogen significantly improved its working capital and eliminated all debt through the sale of some American DG sites and contracts. When comparing the balance sheet ended December 31, 2018 to March 31, 2019, cash and equivalents increased from $272,552 to $2,610,235. Total current assets increased from $26,368,572 to 26,763,765 while total current liabilities decreased from $13,198,320 to $10,567,241. As a result, working capital (current assets less current liabilities) increased over $3 million from $13,170,252 to $16,196,524. This is a record quarter-to-quarter improvement on working capital and cash flow despite the decreased revenues and gross margins. Improving an already robust working capital figure is important because it further reduces the Company’s need to finance in the near future as it fulfills its backlog and introduces new product lines to the market.

It is important to note that Tecogen did not sell these assets out of desperation, having just purchased them as part of the overall ADG acquisition in 2017. Instead, an opportunity arose because of the Company’s ability to extract synergies between the ADG acquisition and its core operations. Tecogen increased the productivity and reliability of the sites acquired in 2017 to the point where it received significant interest from buyers. Management decided to sell a portion of the assets to Sustainable Development Corporation LLC. The sale includes an O&M agreement for Tecogen to continue servicing these sites. There are currently no further plans to sell remaining ADG sites still owned and operated by Tecogen.

As previously mentioned, backlog was $26.9 million as of May 13, 2019, an increase of $10.3 million from $16.6 million at the end of 2018. Although this already implies significant revenue growth as at least two-thirds of the backlog is expected to be fulfilled in 2019, this figure does not include any sales from the Company’s renewed Tecofrost product. Tecogen is carefully developing several projects to demonstrate key vertical markets for the product and expects Tecofrost to add a meaningful contribution to the backlog by year-end and ultimately become a solid product revenue contributor next year. Tecogen is already approaching new customers about Tecofrost and expects to install several units before the end of 2019. Full rollout across the United States is expected next year with plans to leverage the Company’s compressor manufacturing partner Vilter Manufacturing’s sales networks in the Americas and Europe.

The market had little reaction to Tecogen’s Q1 results. This is to be understood as revenue and gross profits declined which will generally not attract the attention of new investors not familiar with the Company’s story. What is more important is that Tecogen has set itself up for a lucrative 2019 by shoring up its balance sheet, nearly doubling backlog since the end of 2018 and continuing with plans to market Tecofrost, which will only add to revenues and backlog for 2019 and beyond.

TGEN remains an under-the-radar stock. As the stock price remains fairly steady, existing shareholders can view the first quarter financial statements as one step closer to Tecogen achieving its goal of consistently profitable revenue growth. Its thinly traded nature makes it a prime candidate for a major run towards our target price on positive news or demonstrated profitability. We believe that this is possible in 2019 as sales backlog transforms into more record revenue numbers and profitability on subsequent quarterly results. Smallcaps Recommendation: BUY.