With a history of mining activity spanning more than 500 years, Mexico remains one of the top jurisdictions for exploration activity and the ongoing discovery of attractive mineral deposits continues to this day. As an exploration junior with several property assets located in Mexico at various stages of exploration, Colibri Resource Corporation (CA: CBI – $0.05 & US: CRUCF – $0.04 & GER: 2CO1 – €0.02) aspires to define at least one significant deposit with the potential for advancement through to a producing mine.

Colibri reported positive news this week for its Pilar Gold property located in Sonora State, Mexico. The Company announced that it had purchased and received assay data for historic exploration work completed by a previous operator of the project.

The detailed assay results for over 8000 samples were released to Colibri by ALS Laboratories, based on exploration programs from 1995 through to 1997 initiated by Santa Catalina Mining (SCM). This work included grab samples and channel sampling from surface and trenching, in addition to significant reverse-circulation and diamond drilling programs. In total about 7900m of drilling had been completed.

Of interest for current exploration work, many of the historical gold and silver assay results could be considered very high grade, including a series of eleven consecutive assays that were above an ounce of gold per ton. While the specific drill log information was not available from this data to fully document the samples extracted, historical reports and updates issued by SCM remain on record and may be referenced to interpret the location and grade of previous drilling work.

For example, one drill core reported by SCM in 1996 included an interval of 54.47 g/t gold across 16.5m and this extremely high grade section is interpreted as the source for the best assays in the report. Another historic drill hole included an interval of 13.5m with an average grade of 9.64 g/t gold. Information regarding drill hole location and orientation can therefore be of use to identify historical target areas and outline potential zones of interest for further investigation. 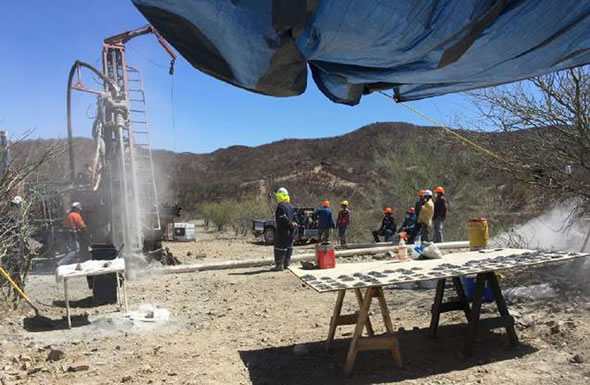 Drilling activities by Colibri Resource at its Pilar Gold Project

The updated exploration model will contribute to define high priority targets in sections where the more intriguing samples have outlined the potential for exceptional gold and silver values. A new internal resource estimate may also be completed based on the addition of new zones to the established deposit area.

The model will also indicate sections that require additional confirmation or infill drilling work in order to achieve further resource definition for the advanced deposit areas including the North Hill, 4 Trench and Main Zone. Less promising sections from the data will also outline zones where further exploration work need not be continued, saving the Company additional time and money and enabling more productive targeting of future efforts.

This promising upgrade for the Pilar project follows on the heels of positive exploration data presented earlier this spring for two other projects operated by Colibri in Mexico. Broad-based field work programs were carried out for the Evelyn and El Mezquite properties. Surface mapping, sampling, and general reconnaissance activity were completed in order to evaluate the presence of alteration on the properties, and outline zones of interest for subsequent exploration work.

The Evelyn Property is located within the Caborca Gold Belt of northern Sonora. This geological trend of alteration systems has contributed to the development of several producing mines in close proximity to Evelyn, and geological mapping has indicated that similar shear zones and altered sedimentary host rock continues through the property area. Associated with this alteration, gold-bearing quartz veins have been identified with the potential for discovery of attractive deposit areas. A program of sampling focused on the alteration zones and vein systems to determine gold grades and outline targets for further exploration.

A total of thirteen grab samples were selected during this program, including eleven samples taken from the main showing and two more from an outcrop in proximity to the vein system. Of these, two samples encountered high grade gold with attractive assay values of 43.9 and 7.28 g/t gold reported. All of the other samples revealed gold values below a gram per ton, well within the range for potential economic interest to warrant further exploration.

At El Mezquite, a high-sulphidation system of alteration has been encountered, similar to significant nearby gold mines in the Sierra Madre mountains of Eastern Sonora. Historical grab sampling completed for this project area revealed gold values above 3 g/t, confirming the presence of gold within the altered volcanic host rock. Colibri focused on outcrop zones with strongly altered and oxidized rock to extract 24 grab samples for its recently completed program.

Assay results from this program demonstrated attractive gold values and higher grades of silver up to 152 g/t were also encountered. Further along, a historic mine working was sampled and higher values of gold up to 1.63 g/t were reported plus associated silver up to 204 g/t. There were also promising traces of base metals with varying grades from the different sample areas, which may provide helpful indicators for subsequent exploration work as the geologists gain a better understanding of the mineralization in this system.

By securing a large batch of historical assay results, along with the detailed review of past exploration activity for the Pilar project, Colibri has achieved a meaningful windfall of data to significantly advance the program of resource definition currently underway. The nominal fee paid to access this information was a bargain in comparison with the time and expense necessary to complete drilling work and assemble sample assays.

Once this has been updated into the deposit model, a more thorough understanding of the overall system may be achieved and the strategy to precisely identify new targets for exploration or confirmation drilling can be determined.

Meanwhile, the preliminary sampling and reconnaissance work completed at Evelyn and El Mezquite has certainly encountered encouraging results to confirm the target deposit types for each of the properties, and warrant follow up exploration and additional geophysical studies. While neither of these projects has ever been tested with exploration drilling programs, this work is being completed with the objective to define drill targets and advance these properties from the early stage through to where potential deposits bearing gold and silver may be achieved with the potential for development.

Colibri is effectively advancing work at all three of these properties in Mexico with encouraging results in hand and the potential for successful follow up work to continue. Each of the projects is situated within highly prospective mineral trends and in proximity to high value deposits. With several active projects in the pipeline, each presenting attractive results to warrant further exploration programs, Colibri is delivering shareholders the potential to realize significant intrinsic value through discovery. Smallcaps Recommendation: BUY.