This week Colibri Resource Corporation (TSX: CBI – $0.035 & OTC: CRUCF – $0.014 & Frankfurt: 2CO1 – €0.013) reported that it had completed the first phase of its 10,000m drilling program at its Pilar gold project. The Company released a batch of assays from nine drill holes, including two previously drilled targets that had been extended to deeper zones.

The Pilar project is located in Sonora State, Mexico, about two and a half hours from the state capital Hermosillo. Sonora is known for its productive mineral resources. In fact, most of the gold mined in Mexico is produced in that area.

The 100%-owned Pilar project is considered the flagship exploration asset for the Company, and a background of information on this prospect may be found in a recent interview presented on Smallcaps Investment Research.

Prior geophysical surveys and exploration work have established two prospective gold bearing areas on the property, dubbed the Main Zone and the North Zone. The most recent 3,000m drilling program was designed to test the potential for a near surface gold system that sampling and trenching had revealed within the oxidized rock. A third potential target area, outlined through gold samples previously identified to the west, was also included in the drill plan. 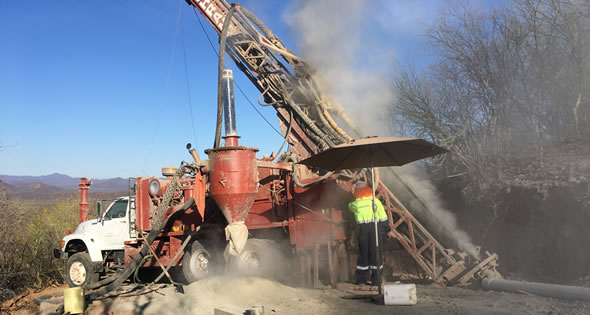 The program was successful in that it encountered attractive gold zones, but also for the strategic value given that the discovery zone has now been expanded to a much larger area. This validates the geological team and confirms the exploration model for the project.

A number of significant gold intervals were reported along with the assay results. The most important of which was a section of 61.5 meters bearing an average grade of 0.75 g/t gold, from drill hole JES-18-24. This is the widest interval of gold mineralization that has been encountered so far at Pilar, and it also included several narrower zones of higher grade alteration. This drill hole was located to the northwest of the Main zone of the deposit, and opens up an enlarged ‘foot print’ for the emerging discovery area. Wide intervals of gold alteration situated near surface have a higher economic potential and are therefore considered to be of value in early stage exploration work.

Several of the other drill holes encountered higher grade gold values across more narrow intervals. The results from drill hole JES-18-25 included one such interval, a section of 3 meters with 5.4 g/t gold plus 2.95 g/t silver roughly 75 meters below surface. This higher grade interval is notable in that it represents the southernmost extension of the drilling completed so far and follow up work along strike may indeed outline further expansion of the deposit.

Drilling at the 4 Trench target also achieved a successful outcome, with drill hole JES-18-27 encountering three separate intervals of gold and silver alteration, each several meters in width, with grades up to 0.79 g/t gold plus 30.3 g/t silver. This stacked system of alteration will become an intriguing target for additional drilling during subsequent rounds as the program moves forward.

The new mineralized areas encountered in this program have successfully expanded the lateral deposit area by more than 145 meters and the system remains open along strike in both directions. The outlook for additional discovery success is further enhanced by the presence of a historic mine shaft which has been identified roughly 170m further to the south of the current deposit area and on strike (see map above).

This is a very encouraging factor that bears special significance. Even more so because surface samples taken around the historic mine shaft included grades of 2.48 g/t Gold and 1.23 g/t Gold. Gold bearing mineralization from this shaft is very similar to the structural mineralization to the north west which would indicate that it may be part of the same system..

During the following months, the results of the Phase 1 drilling will be processed and the new information incorporated into the exploration model for the property. A second phase of drilling work is planned to commence later this year with up to 7,000m of additional drilling work to follow up on the known deposit areas and test further discovery targets within the property.

The appeal of the Pilar property as an excellent prospect for discovery is based on a number of factors. The project is located within a region known for large gold deposits, and historic mining activities have already taken place on the property area. Moreover, there is encouraging evidence for a gold system at Pilar based on prior drilling work completed by previous operators of the project. Additional early stage exploration work completed by Colibri has yielded positive indications for several target areas.

The first round of drilling has achieved success, as it validated the exploration model and also opened the potential for additional discoveries in subsequent work programs. Colibri is now advancing a systematic exploration program designed to expand the discovery area outlined so far and to test new targets with the objective to build greater overall resource magnitude.

A subsequent round of drilling is scheduled to commence later this year. Those results will also be included in the first NI43-101 compliant resource estimate to be prepared once the second phase of drilling is completed. As more work is completed, the odds to define a large deposit area increase, which will move the project along the value curve.

Speculative investors should take note of the potential for Colibri. The planned drilling activity set for Phase 2 at Pilar, along with the potential for new gold discovery zones to expand the early stage resource potential, are strong catalysts to move this stock higher, especially as it is currently trading within bargain territory. Recommendation: BUY.