A bull market is now in process for nearly all resources. As the market price for various metals and minerals continues to race higher, the junior mining and exploration stocks with established leverage to mineral property interests are also becoming more attractive to investors. This trend may still be in the early stage and that is very good news for Globex Mining Enterprises Inc. (CA: GMX – $1.05 & US: GLBXF – $0.85 & GER: G1MN – €0.70). With a portfolio of property and royalty interests that extends across the spectrum of resources, the Company is exceptionally well positioned to participate in the trend.

Advancing a property-generator business model has enabled Globex to successfully complete numerous transactions. These deals function to achieve capital gains while often retaining leverage or royalty interests. The strategy ensures that shareholders participate in the potential value creation as properties are advanced by partners. This week the Company provided an exciting update for development on a property in which Globex retains a royalty interest.

Recall that several years ago Globex opted to reorganize some of its Quebec-based property holdings into a separate business unit. Organized as Chibougamau Independent Mines Inc (CIM), this new corporation was spun out to shareholders, and commenced trading on the TSX Venture. One of the properties rolled into CIM was the Mont Sorcier Iron and Vanadium project. The property was eventually involved in an option deal with Vanadium One Iron Corp [VONE]. CIM earned payments in cash and shares of Vanadium One in this transaction, along with the commitment from its partner to advance significant exploration.

Subsequent work programs enabled the definition of deposit enriched with iron, vanadium and several other valuable by-product minerals. Vanadium One is now committed to establishing a producing mine on the property.

Vanadium One reported arranging a deal with a subsidiary of Glencore PLC this week. The companies have entered into a long term Finance Raising Assistance Agreement to support Vanadium One in pursuit of up to $10 million in project financing. This money will contribute towards completion of a Bankable Feasibility Study for the property. In addition, a separate Concentrate Offtake Agreement was also established. The terms of this deal grant Glencore a life-of-mine offtake commitment for Mont Sorcier if certain conditions are achieved.

Glencore is a diversified specialist in resource commodity production and marketing. This relationship will support Vanadium One towards defining project economics for a potential mine development at Mont Sorcier. 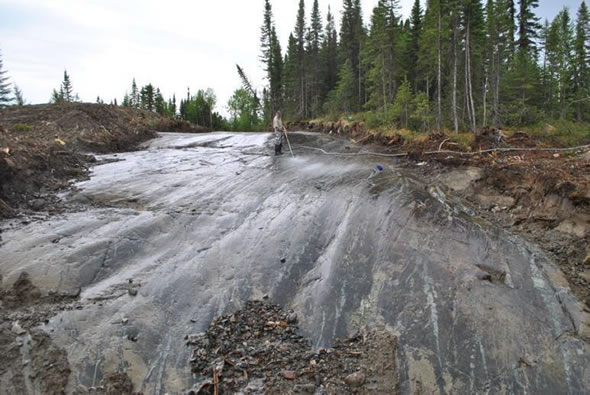 This outcome would also be the ideal result for Globex, as it retains a 1% Gross Metal Royalty on the iron production from the property. CIM also retains royalty leverage, with a 2% GMR on all production and in a transaction reported last year with Electric Royalties [ELEC] another 1% GMR on all vanadium production is held by ELEC on Mont Sorcier. This is also good news for Globex shareholders, as the Company owns a significant position of 3 million ELEC shares related to a previous transaction.

With a subsequent transaction to vend the royalty held by Globex on the Middle Tennessee Mines to ER, Globex anticipates receiving among other things another 14.5 million shares of ELEC if the transaction is completed. The transaction is scheduled to close shortly, following a financing by ELEC to raise the cash payment associated with the deal.

Star Peak Mining Ltd. [STE] also reported progress on another property. In a previous transaction, the Normetmar/Normetal, Lac Turgeon and Rousseau properties were sold by Globex to Star Peak. Globex received payment of cash and shares, and retained a 2.5% GMR on the properties.

Starr Peak commenced a significant drilling program at NewMetal a consolidation of the Normetal/Normetmar and surrounding claim holdings earlier this year. The first batch of assay results showed wide intervals of polymetallic mineralization, bearing zinc, copper, silver and gold. The intersection of a massive sulphide bearing alteration zone is promising given that historical production of similar high-grade massive sulphides mined by a former operator of the Normetal Mine within the property boundary. The Normetal Mine operated for nearly 40 years and was the third largest massive sulphide deposit in Quebec.

Among the initial results, one interval of more than 12m grading 20.94% zinc, 0.42% copper, 39.58 g/t silver plus 0.21 g/t gold was reported. The combined grade of this section amounts to 23.82% ZnEq. In another drill hole, a section of 12.3m was mineralized with an average grade of 8.19% ZnEq. These are considered exceptional results and they represent an encouraging start to the drilling program. All of the drill holes reported to date encountered massive sulphides or stringer sulphides in an alteration zone.

The shares of Starr Peak have been gaining in value this year as work continues. This too is good news for Globex shareholders considering that the Company holds 1.15 million shares of Starr Peak, received in payment for the original property transaction. At current market price, that position is valued in the range of $3.5 million.

Perhaps the most appealing aspect to the advancement of the discussed properties is that Globex is not contributing any of the funding to achieve these positive results. Indeed, in each of the transactions Globex secured a net gain in upfront payments as the property vendor. Now as these assets are delivering positive results Globex is again positioned to gain value through its retained royalty interests.

The activity related to the Mont Sorcier property is attractive on several levels. The relationship with Vanadium One and Glencore highlights the value proposition for Globex shareholders. That Glencore has agreed to an offtake arrangement in this partnership indicates the potential that an open pit iron/vanadium mine may be established on the property. This would create a recurring revenue stream payable to Globex and spin out Chibougamau Independent Mines from the GMR’s held for all of the metals that are produced from the operation. In addition, Globex owns a significant share position in ER, also positioned with a vanadium GMR on the project. In effect, Vanadium One is incentivized to carry the risk to fund the project through to development and if they are successful, Globex is a beneficiary on several levels without having to carry any risk.

So too with the similar potential at the NewMetal property advancing with royalty partner Starr Peak Mining. Once again, Globex may benefit from the windfall of a lucrative royalty payment stream if its partner is successful in adding value to the project and achieving mine development. In addition, Globex owns a large share ownership of its partner and will benefit in the added share value of these holdings.