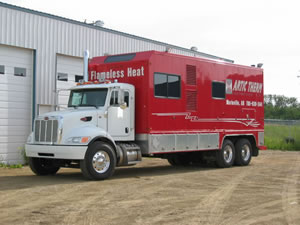 The flameless heating devices from Arctic Therm use a diesel engine to heat oil, which is then circulated to heat exchangers, providing a clean, pollution free discharge of warm air. The photo shows a unit on a truck, able to generate up to 1,200,000 BTU's.

Although Enterprise Group’s (E – $0.24 & 3EO – €0.16) third quarter earnings may look disappointing at first, it’s important to note that they were significantly impacted by exceptional expenses. Even more important, is that these one time costs will contribute to a much better result in the current and following quarters.

For the current fourth quarter and beyond we expect to see an improved performance because Enterprise’s underground utilities and directional drilling division is operating near full capacity, the demand for renting heavy equipment began to increase in the latter part of the third quarter and is continuing in the fourth quarter, and the recent acquisition of Artic Therm should start to contribute to the bottom line.

Enterprise Group experienced an eventful quarter. Late August, the Company entered into a $12.5 million finance facility with the Canadian branch of PNC Bank, one of the largest banking groups in the United States. The loan was used to repay old loans, which had higher interest rates, and to fund a series of acquisitions.

A first Letter Of Intent (LOI) to acquire a utility services & maintenance company out of Edmonton, Alberta was actually signed a few weeks before the $12.5 million loan was finalized. Because the target company is completing a corporate reorganization to prepare itself for the impending sale, the deal hasn’t been closed yet. The acquisition target is profitable and complimentary with Enterprise’s T.C. Backhoe & Directional Drilling subsidiary.

Finally, Enterprise also bought Artic Therm International Ltd, a private company out of Alberta, which was founded in 1998 and is an industry leader in renting flameless heaters to the construction and oil & gas industries in Western Canada. During the twelve consecutive months ending March 31, 2012, Artic Therm generated sales of $4.7 million resulting in an EBITDA in excess of $2.7 million and a net profit of over $2.0 million. Enterprise paid $6.5 million for the company.

All these items above impacted the third quarter’s net income by as much as $400,000. Additionally, the Company incurred higher than normal advertising and promotional costs related to the launch of Artic Therm.

Enterprise Group Inc. operates in three main business units for the oilfield and utility infrastructure markets in central and northern Alberta, Canada. Its Directional Drilling & Utility Installation division is currently the backbone of the Company and provides construction services such as installation of underground utility infrastructure and directional drilling.

Enterprise also constructs pipelines in the energy services industry throughout Western Canada utilizing a fleet of over 200 trucks and heavy construction equipment. This division disappointed as revenues for the quarter were $380,000, a decline of almost $1 million versus the third quarter last year. Gross loss was $57,000, compared to a gross profit of $426,000 in 2011.

The decrease in revenue for this segment is mainly due to the Company continuing its strategy of avoiding projects with smaller margins, which results in higher field margins but at revenue levels lower than historical amounts.

In addition to these two businesses, the Company launched its heavy equipment rental division, E One Limited, in the first quarter of 2012. Construction contractors typically operate a core fleet and will rent when activity surpasses full utilization of their fleet.

As financial results for this division are included in the pipeline construction business, no specific information is available. However, as E One has several rental contracts for its equipment, management expects this division to return to making a positive contribution to the Company in the fourth quarter.

Additionally, now that the rental business of Artic Therm is fully integrated, management also foresees this acquisition to contribute significantly to the earnings of the Company for the remainder of 2012 and through 2013.

It was a good idea by management to incur all these one time costs in the same quarter, so that only the benefits of the financing and acquisitions can be highlighted in the quarters to come.

The underground utility and infrastructure division is currently operating at or near capacity and its largest customers have a significant backlog of work that will carry through 2012 and 2013.

The Company is finalizing the acquisition of the utility services & maintenance company out of Edmonton, Alberta, which should contribute nicely to earnings and for which most costs have already been made in the third quarter.

And finally, Enterprise Group is currently negotiating and performing due diligence on an additional acquisition target that management expects to complete in the first quarter of 2013.