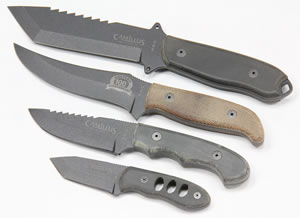 The Camillus brand continues to be an excellent growth driver for Acme United. Pictured above, four Camillus knives - Made in the USA.

Acme United (ACU – $10.94) had solid sales and earnings for the third quarter ended September 30, 2012. In fact, these were the Company’s highest third quarter numbers in its most recent history. Net sales for the quarter reached $20.4 million, while net income was $798,000, an increase of 7% and 17% respectively compared with the third quarter last year.

The Company’s short to medium term outlook also looks promising. The Westcott iPoint pencil sharpeners, Scissor Mouse and TrimAir paper trimmers continue to sell very well. As a result, the Company’s management has already indicated that the current fourth quarter will be strong.

In June of 2012, Acme acquired certain assets of C-Thru Ruler Company, a well-known supplier of drafting, measuring, lettering and stencil products. In 2011, C-Thru’s revenues were approximately $2.5 million with gross profits reaching roughly $1 million. The C-Thru business will be largely absorbed by existing staff and facilities within Acme United. In the third quarter of 2012, C-Thru revenues immediately contributed $900,000 to sales, while $2 million was targeted for the entire year.

Camillus has received orders from several mass market retailers for its regular line of knives and the Les Stroud signature series. These knives are now on the shelves, which is an ideal timing because the fourth season of Survivorman, in which Les Stroud uses the new Camillus knives, is airing and because of the ongoing hunting season. In the first half of 2012 Camillus sales reached $1.5 million, while the Company expects to at least double that amount in the second half of the year.

Next to rising revenues and earnings, increased distribution and new product introductions, Acme United’s growth story is also supported by a 7 cents quarterly dividend, which at today’s share price is an annual yield of 2.6%. This is why Acme remains a safe investment.

We estimate earnings to reach $3.42 million in 2012, or $1.10 per share, an increase of 21% compared with fiscal year 2011. That number takes the organic growth as well as the earnings generated by C-Thru Ruler into account. We reiterate our buy recommendation for Acme United Corp. with a short term price target of $14.92, which is more than 36% above today’s stock price.

When you’re looking for a robust Company with growing sales and earnings that pays a nice dividend, Acme United should be high on your list. This is not a stock that’s going to double overnight, but it will continue to reward its shareholders as it has done the last several years.