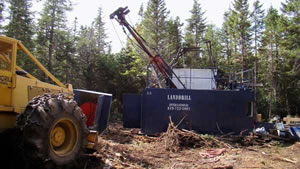 Drill set up on Hole 10 - 4 West on the West Zone of the Mooseland Gold Project.

NSGold Corporation (NSX – C$0.30) announced the first results from its Phase 1 drilling program at its Mooseland Gold property. To date, assays have been received for two complete holes (NSG 1-10 and NSG 2-10) and selected partial sections of other holes. These results show significant potential.

Samples for the first 7 holes from the West Zone have been shipped to Laboratoire Expert to conduct an analysis on them.

Note that all the above gold intercepts occurred in veins of a dark grey smoky quartz known to be the primary host for gold in the Meguma formations. Drilling at Mooseland has consistently intercepted such veins, many of which do not show visible gold at the point of intersection, but do contain anomalous gold values. Consequently, they are considered to be potential ore zones.

This is especially good news since three other drill holes on the West Zone intersected substantial quartz saddle structures; NSG 4-10 with 12.6 meters and 6.4 m, NSG 6-10 with 10.5 meters and NSG 7-10 with 22 meters of 50% quartz veining. Such thickness represents a potential large tonnage target.

To date, two historical reserve estimates (an essential first step to determine if mining can be done economically) were made for Mooseland.

A first reserve estimate was prepared by MPH Consulting Ltd. and covered the West Zone of Mooseland. It was first released in 1987 and was based on 65 drill holes.

A second historical reserve estimate was prepared by Kopp for Hecla Mining in 1988 and is based on gold-bearing drill intersections diluted to minimum mining widths of five feet (1.51 meters). The drilling and associated work identified historical reserves of 640,000 tons grading 0.47 ounces per ton (un-cut) or 16 grams per metric tonne in two separate zones (East Zone and West Zone).

The Kopp estimates give a better overview of Mooseland’s potential as they contain data from more drill holes and include information from the East Zone of Mooseland.

Note that the above gold resource estimates by MPH Consulting and Kopp are historic in nature and were compiled before National Instrument 43-101 Standards of Disclosure for Mineral Projects came into effect. The resource estimates have not been verified by an independent “Qualified Person” and are presented for information purposes only.

Because it was impossible to determine an exact reserve estimate of the Mooseland property based on the two historical resource estimates, NSGold initiated a two phase exploration program intended to verify past work and to identify and target untested areas within the Mooseland deposit.

The first results from those drillings have now been received, and they are consistent with the high-grade gold findings found in earlier programs.

What do you think about NSGold Corporation and its Mooseland property?