News » NSGold Issues Most Important PR in its Young History

NSGold Issues Most Important PR in its Young History 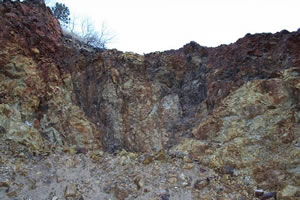 The colour alterations in the rock is part of what will be mapped during the upcoming Phase I exploration Program at Dios Padre.

On Monday, NSGold Corporation (NSX – $0.48) issued, what I consider to be, its most important press release so far. The mineral exploration Company announced that it’s starting a phased exploration program at its Dios Padre silver property in Mexico. That in itself is good news, but what really got me excited was the fact that the PR was packed with interesting information about Dios Padre’s additional potential.

NSGold will implement a two-phased exploration program. Phase I will focus on getting a better understanding of the entire Dios Padre property and its potential, while Phase II is a drilling program aimed at determining the geometry and grade of the known mineralized pit and breccia pipe.

Based on historic exploration programs, sampling and historic resource estimates, the Company targets to get a resource estimate of at least 60 million ounces of silver at the primary zone. This estimate excludes the rest of the property. The financial picture looks like this:

Unfortunately the historic resource estimates can’t officially be relied upon because they’re pre 43-101. But the good news is that, most likely, only a modest drill program will be required in Phase II to produce a 43-101 compliant inferred mineral resource. The Company expects to have this ready in 4th quarter of this year.

Phase I is a $700,000 program in which the entire property will systematically be mapped. Next to the initial zone, where the historic workings took place, there are a large number of other areas at Dios Padre that the Company’s geologists want to take a good look at. So rock samples will be taken from all over the property, which has never been done on Dios Padre. Also, the known breccia and underground tunnel will be further investigated during Phase I.

Phase I is to start in the coming weeks.

Phase II is a 10,000 metres surface and underground drilling program budgeted at $3 million, which will target the known resource in the Dios Padre breccia. The drilling will be done underneath the old workings to determine the geometry, shape and grade of this mineralized area. Obviously, when the geologists notice anything exceptional in the immediate surrounding of the old workings, they will try to find out what’s there.

Next to the 60 million ounces silver estimate, there are several other items that make Dios Padre even more valuable.

Is NSGold the most undervalued resources stock out there? I don’t know, because I don’t know all of them. Is NSGold undervalued with its current potential and the current price of gold, silver and other commodities? You bet it is! Don’t let this opportunity pass you by to make some serious money.