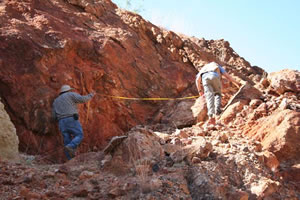 NSGold Corp. (NSX – $0.42) started off the new year by announcing significant geological results from its Dios Padre property in Sonora State, Mexico. A ground-based geophysical survey, supported by geochemical rock sampling, identified five potential gold-silver-copper zones. One such zone corresponds to the site of earlier mining activities, for which the Company targets a resource estimate of at least 60 million ounces of silver.

Moreover, the geophysical survey revealed a very large conductive anomaly of 600 metres wide by 800 metres long with a depth of at least 300 metres, which is the limit of the effective range of the survey method. This mass lies just to the north of the most recent historic mining operations.

All the identified zones obviously represent prime targets for future exploration and drilling.

During the second half of 2011, NSGold’s geologists conducted an extensive geological survey at Dios Padre to identify new drill targets.

First, the property was systematically mapped with 17 lines of each 2,000 metres long. Next, a geochemical rock sampling program was initiated by taking rock samples of approximately two to three kilograms weight at 100-metre intervals. These samples were sent to ALS Minerals Laboratory in Vancouver, which analyzed them for 36 elements, including gold, silver and copper.

Additionally, a 3-D Induced Polarization (IP) ground geophysical program was carried out by SJ Geophysics Ltd. With the acquired geophysical data digital maps of the underground were produced along with a three dimensional model.

Induced polarization (IP) is a geophysical imaging technique used to identify subsurface materials. It’s a valuable tool for base-metals and gold exploration because it can narrow down drill targets on a vast exploration property. As a result, drill efforts can be concentrated on those areas instead of “drilling blind”.

During an IP survey, an electrical current is induced into the subsurface through two electrodes, which charges the surfaces of metallic minerals in the ground. Once the current is switched off again, the voltage decays, but the ground is left with a small storage of energy. This amount of stored energy gives clues into what minerals lie below the surface.

Based on these geological results, an updated technical report for Dios Padre will be prepared. It will include all the geochemical and geophysical results, along with a proposed work program to further advance the property.

The report will be published later this month, after which an extensive drill program will commence to determine the geometry, shape and grade of the identified zones.

After the updated technical report on Dios Padre is filed, the Company expects to complete the spin-out of the NSX Silver shares to the current NSGold shareholders.

The results from the geological work conducted at Dios Padre are very positive. It identified several high prospective zones, which were unknown thus far.

In the coming months, drill rigs will test these areas so that we’ll find out more about the property’s vast potential.