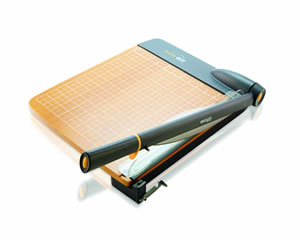 The Trimair paper trimmers have had strong customer response and will be available in several major retailers starting in early 2012.

Acme United (ACU – $9.55) received a GOOD DESIGN award from the Chicago Athenaeum, Museum of Architecture and Design for its Westcott family of Trimair paper trimmers. The Trimair family has had strong customer response and will be available in several major retailers starting in early 2012. Thanks to the Trimair, Acme aims to, at least, double its current paper trimmer sales.

Consumers will often buy a product not because it won a GOOD DESIGN award, but simply because it looks better than those of its competitors. Usually this is exactly the product that won a design prize.

The iPoint electric pencil sharpener, for example, won a GOOD DESIGN award in 2009. Since then, its sales have never stopped growing and reached about $10 million in fiscal year 2010, making it Acme United’s single best selling product.

GOOD DESIGN is one of the oldest and most important design competitions worldwide. This year the Museum received thousands of submissions from over 48 countries globally. Among them were products from the biggest and most famous brands like Apple, Hewlett Packard, BMW, Porsche and Microsoft.

The new Trimair Rotary and Guillotine paper trimmers (see images below) combine an eye-catching design with an outstanding performance, which is critical in today’s high demanding markets.

The tools feature Titanium bonded blades, making them 10 times harder than stainless steel. As a result, the Guillotine trimmer can cut up to 30 sheets of copy paper at once. At the same time, the trimmers have the famous Westcott contemporary design, which makes them stand out on the shelf.

We’re sure these products will have a broad appeal to businesses and schools, to the crafts markets and to consumers in general.

Acme’s Board of Directors recently declared a quarterly cash dividend of 7 cents per share which is payable on January 30, 2012 to stockholders of record on the close of business on January 9, 2012.

At Acme United’s current share price, that’s an annual yield of almost 3 percent, which is substantially higher than the interest rate you earn on a regular savings account or a 10-year bond.

The Company has been paying quarterly dividends for many years and has increased the amount by 1 cent every 6 to 8 quarters. This is an excellent way to show confidence in the business and the market. Additionally, it builds long term shareholder value.

In order for a product to sell, it used to be sufficient that it worked well. Nowadays, consumers have an almost endless choice of impeccable working products. As a result, Companies need to go that extra mile to manufacture outstanding items that have additional features and a fabulous design. Apple would only sell half as many iPhones as it does today, if the mobile phone had an everyday design.

Acme United saw this trend and acted upon it a few years ago. As a result, iPoint pencil sharpener sales exceeded $10 million in 2010 with sales still rising.

Next to excellent product design and innovation, Acme United’s growth story is also supported by a 7 cents quarterly dividend, which at today’s share price is an annual yield of almost 3%.