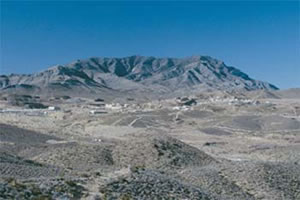 The Mountain Pass rare earth element mine with Clark Mountain in the background.

NSGold Corporation (NSX – $0.31), the mineral exploration Company that we recently introduced on Smallcaps.us announced that it staked a number of claims totaling almost 5,000 hectares in Nova Scotia.

What’s remarkable is that these claims have a rock package that’s known around the world to contain Rare Earth Elements (REE).

As you undoubtedly know, interest in REE like lanthanum, tantalum and neodymium has peaked the last couple of years. The reason for this is quite simple. As the name indicates, these materials are scarce, yet they’re crucial in everyday products like laptop computers and iPhones. However, these elements are also an irreplaceable part of radars, missile-guidance systems, satellites, the Abrams battle tank and even the Navy’s DDG-51 destroyers.

This potential shortage for REE’s has set off a search in the U.S., Australia, Canada and South Africa for new rare earth mines. In the U.S., plans are also in place to bring the Mountain Pass mine, in California’s Mojave Desert, back into full production after it was shut down in 2002. Following an extensive modernization and expansion project, Mountain Pass, owned by Molycorp Inc. (NYSE – MCP), will probably become the largest rare earth deposit in the world.

All of this to say that NSGold made an intelligent move to stake these claims. The Company paid a small amount of money for a potential REE property that’s in high demand. During the next two months, NSX will prepare the historical review of the new land and it will decide to do the prospecting itself or with a partner.

The Mooseland Gold project remains NSGold’s number one priority. Staking these potential REE properties will not distract the Company from that, but it was an opportunity too good to pass up.