Noble Roman’s continues to focus on growth in its three pizza concepts, which are non-traditional franchises/licenses – particularly at convenience stores, travel plazas and entertainment facilities – the sale of take-n-bake pizzas through grocery deli departments and stand-alone take-n-bake franchised locations.

In 2014 through October 31, 2014, the Company signed 41 additional new franchise/license agreements for non-traditional locations and is in discussion with numerous other convenience store chains and entertainment facilities to add to the concept.

Mr. Mobley, the Company’s, Chairman and CEO, stated, “During the second and third quarters we signed agreements with a chain of approximately 300 convenience stores for seven locations, all of which are now open. The chain targets 21 additional locations for which it intends to sign agreements shortly. Thereafter, development will continue until they have put Noble Roman’s Pizza in nearly all of their locations.” 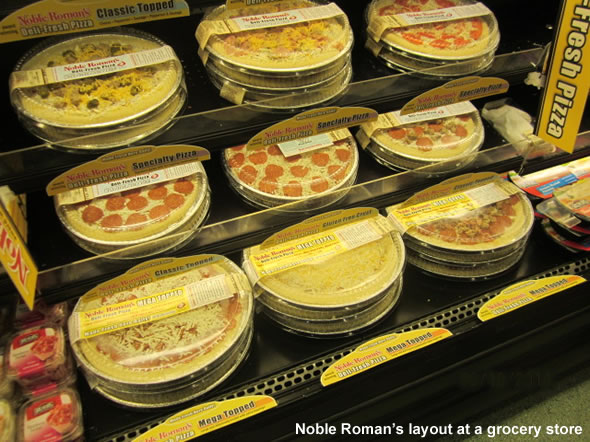 Also with this concept, the Company has a significant pipeline of potential franchises, but it declines a high percentage of the applicants in an effort to create a solid base of franchises with whom it can continue to grow the system.

To give an idea of the importance of each concept at this moment, the breakdown of royalties and fees for the first nine months of 2014 is as follows:

Take-n-bake continues to be one of the fastest growing segments of the pizza industry, and Noble Roman’s is at the forefront of this trend, rapidly increasing its presence with the stand-alone take-n-bake concept.

Noteworthy is that the growing interest in Noble Roman’s take-n-bake offering has enabled the Company to advance beyond selling to individual, independent grocery stores, so that it’s now actively and successfully marketing the offering to grocery store chains around the country.

The Company anticipates continued growth in all three concepts for the remainder of 2014 and even greater revenue growth in future years, while maintaining nearly constant operating cost as has been the case for the past several years.

Some might argue, Noble Roman’s isn’t growing fast enough with revenues increasing less than 10%. Well, Smallcaps.us first featured Noble Roman’s in July of 2012 at $0.62. So we’ve been holding the stock for almost two and a half years and currently have a very nice profit of 163%.

And because we’re convinced that Noble Roman’s management is able to continue to steadily grow the number of distribution points, and as such the Company’s sales and earnings, we have no intention of selling our shares at this moment.