Thanks to the acquisition of Provital Solutions, a few months ago, LiqTech International (LIQT – $1.27), the clean technology company that manufactures and markets highly specialized filtration products and systems, was able to announce its first profitable quarter since Q1 2012.

Gross profit margin increased to 29.8% in the third quarter this year, compared to 9.3% for the same period last year.

Net sales for the nine months ended September 30, 2014 were $12.10 million, compared to $9.12 million for the same period in 2013, representing an increase of $2.95 million or 32%. The increase was again accomplished by higher sales of liquid membranes, including Provital filtration systems (up $2.96 million as compared to the same period last year). For the nine months, ended September 30, 2014, LiqTech recorded a loss of $1.17 million, compared to a loss of $2.88 million for the comparable period in 2013, representing a decrease in loss of $1.71 million.

Before the acquisition, the two companies were already well acquainted with one another as Provital was founded in 2009 to sell filtration solutions based exclusively on LiqTech’s ceramic membranes for the pool and spa industry. Thanks to LiqTech’s silicon carbide filters significantly higher fluxes are achieved when compared with other filter types or sand filters. Additional advantages of the system are a reduction of:

In 2013, Provital Solutions reached sales of US$2.5 million with EBITDA margins in excess of 25%. The acquisition is expected to be accretive to LiqTech’s earnings in 2014. 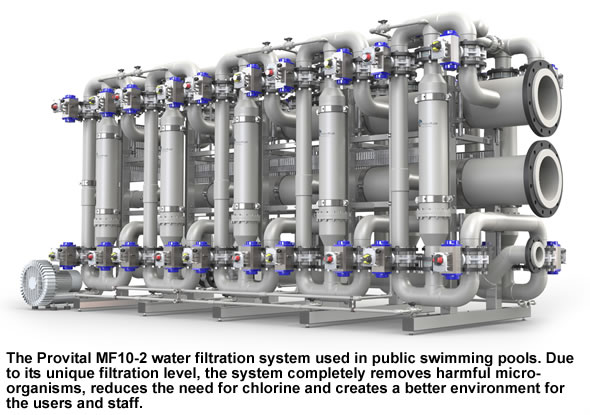 In the short time since the acquisition, the Company worked intensively to bring down production costs and lead-times. During the third quarter, LiqTech also narrowed its market focus to a more limited number of applications within the water treatment, industrial, oil and gas, swimming pool and emissions control industries. These filtration applications are in areas where the Company has already proven the value of its technology and in which it has an experienced sales staff. As a result, LiqTech will be a specialist within these specific applications and will become a more valuable partner to its customers.

It’s clear that Provital is the driver behind LiqTech’s strong sales and earnings improvement. At the same time, the new management team has implemented several changes during the past few months that broadened the Company’s product range and opened new market opportunities.

LiqTech is intensifying its sales efforts in a narrower number of target markets. In addition, the Company has developed a number of standard offerings with which it can go directly to the customer, instead of the customer having to develop applications themselves. This is a clear progress and should lead to improved results. Hold on to your shares.