Royalty leverage is frequently overlooked as a strategy to build long term value in the resource sector. Even though a mine prospect may be inactive for many years, outstanding royalties that are issued shall remain in perpetuity. There is no further direct cost on the royalty holder to advance a project or participate in development costs. And if a project is indeed developed into a producing mine, royalties immediately generate cash payments based on production output.

These royalty holdings have already delivered a successful contribution to the balance sheet. Globex anticipates annual payments of roughly $2 million per year just on the royalty held for the Mid-Tennessee Mines operation. Several other advanced projects are approaching development or production that may begin contributing an income stream as well.

This week, Globex presented an update on one such advanced project currently underway. The Russia Kid gold mine is a past producing underground mine located in Quebec. Back in 2005, Globex optioned its 100% ownership of this property to Rocmec Resources. A cash payment was received, in addition to a Net Metal Royalty (NMR) granted to Globex. The project was renamed the Rocmec 1 Gold Mine, and small scale mining resumed until 2009. A total of 1,111 ounces of gold was produced in this phase. Thereafter, Rocmec via a name change became Nippon Dragon Resources Inc. [TSXV:NIP]. 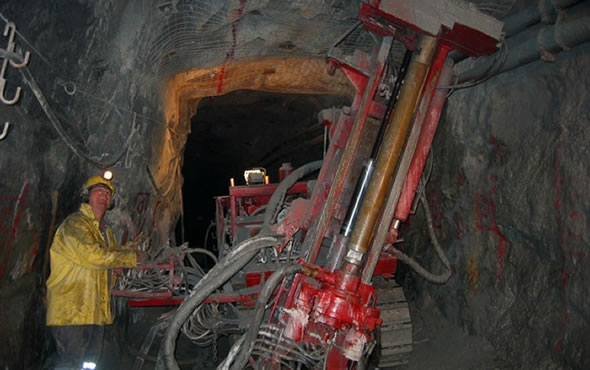 Nippon is currently advancing to restore production at Rocmec 1 with an ambitious overhaul of the entire project. A well-defined ore body containing 119,500 Measured & Indicated gold ounces, plus 359,600 ounces of gold Inferred, has been established for the property.

The NMR held by Globex for this asset remains in good standing. Under the terms of the royalty, a payment of 5% is due for the first 25,000 ounces of gold produced. A flat 3% royalty is payable on all subsequent gold output thereafter. Globex was not required to contribute towards the substantial funding commitment to restore the mine, but will indeed begin receiving cash payments when production resumes.

The first stage of the plan is currently in process, to open a surface portal and dewater the ramp. Upper elevations of the McDowell and Talus veins may be accessed from the ramp. The first phase of the plan will focus on level 45 of the mine, advancing to level 90 as dewatering continues. These levels will be refurbished during the next 20 months and final development completed to enable mining to resume. A total of five mine levels will eventually be opened and available for mining from the ramp.

Nippon is committed to resume commercial mining operations at Rocmec 1. A patented thermal fragmentation mining process was developed and will be showcased as part of this program. Nippon will also employ conventional mining methods as warranted.

Globex also presented an update on the activity underway at the Francoeur/Arntfield Gold Mines property. Several attractive discovery zones have been identified so far at this advanced Quebec project. Among these, the South Gold Zone yielded encouraging gold assay values ( up to 9.52 g/tAu over 7.1 metres) from a program of trenching late last year.

Globex has now commenced a more thorough program of surface stripping in the area where previous trenching work led to the discovery of the (Is OK) Gold Zone. Particular focus will be directed to an outcrop surrounding a high-grade trench sample. Assay results in that area included a gold interval of 7.04 g/t across 9.5 meters.

Another area further to the south of the Francoeur #8 Gold Zone will also be exposed for more thorough investigation. High grade grab samples were previously reported from this area, including a highlight assay of 25.41 g/t Au.

Channel sampling has already begun. This involves using a concrete saw to cut into exposed rock sections where attractive alteration may be observed. Samples are extracted laterally from these areas to gain a more representative indication of the resource potential. Combined with prior trenching work, the near-surface resource zones may be assessed from this program. The objective is then to define new targets for drilling.

A shallow drilling program has also commenced at the Francoeur/Arntfield Gold Mines property, targeting several other advanced targets on the property. These include down-dip extensions identified at the 450 Gold Zone and a wide interval encountered in a historical drill hole. Geophysical anomalies related to the South Shear zone, plus historical trenching targets, will also be tested.

Meanwhile, a third-party consulting firm is working towards the completion of a 3D model for the entire property area. This includes results from all previously completed geophysical and geochemistry programs and an impressive database of assay results assembled from several years of drilling and sampling work. The objective will be to identify higher grade gold zones for further exploration work. There is also the potential for a bulk tonnage system of lower grade gold to be outlined from this model.

Globex serves as a case study for the successful acquisition of resource property assets. A commitment towards the advancement of multiple projects positions the Company among the best microcap resource stocks in Canada. Updates presented by Globex this week demonstrate its balanced approach to build shareholder value.

The initial acquisition of the Russia Kid / Rocmec 1 Gold Mine created an opportunity. A transaction to vend the asset afterwards subsequently earned a capital gain. A longer-term value proposition was also achieved with the NMR held against this project. More than a decade of subsequent exploration and development work continued, funded by other companies. With the pending achievement of gold production now in process at Rocmec 1, Globex anticipates the start of yet another payment stream .

Additional exploration work continues at a number of other projects controlled by Globex. With each successful program completed, the value of these prospects is enhanced. The current exploration work underway at the Francoeur/Arntfield Gold Mines property may therefore build shareholder value through the drill bit. Globex continues with a thorough strategy at this project that achieves positive results.

Since Globex holds leverage to dozens of exploration properties, the Company provides extensive diversification and steady news flow. With more than $1 million in exploration work completed per year, the potential for discovery is exceptional. The proven track record to secure profitable transactions creates additional value. A portfolio including more than 40 royalty agreements provides the long-term prospect for cash income to be realized through the successful advancement to mine production funded by partners. Globex has assembled the perfect base of assets to deliver this strategy for value creation. SmallCaps Recommendation: BUY.