This week EnWave Corporation (CA:ENW – $1.75 & US:NWVCF – $1.32 & GER:E4U – €1.22) issued an update on its relationship with Bonduelle. An established producer and distributor of premium frozen foods, Bonduelle was one of the first corporate partners in the food processing sector to advance into a structured royalty agreement for REV technology. Adaptations for this long term arrangement have been necessary from time to time according to changing circumstances.

Several years ago Bonduelle determined that the use of REV processing enabled a superior method to preserve vegetables such that they retained flavor and texture even after freezing. After a phase of testing and product development, Bonduelle opted to lease a 120kW QuantaREV machine and initiated commercial production of the InFlavor line of industrial food products. InFlavor was subsequently recognized with awards at food industry conferences and events.

As part of its lease agreement for a 120kW REV unit, EnWave granted exclusivity to Bonduelle for use of the technology in the North American market. Bonduelle pays the Company a royalty on all frozen vegetable sales from production using the REV machine. A supplementary milestone cash payment was also issued to EnWave as part of the extension of this agreement.

For now, the decision to move ahead with the purchase of a larger REV machine has been put on hold however. This delay has led to the conversion of the royalty license held by Bonduelle into a non-exclusive agreement. EnWave anticipates that a significant purchase order will be secured for a larger REV machine in the future nonetheless. The Bonduelle partnership remains an important corporate relationship.

The application for processing of frozen vegetables with REV technology continues to attract new enquiries from other interested companies. Discussions are currently underway with several companies that may step up to purchase REV machines and begin operating in North America.

Corporate Update and Guidance Provided by President and CEO

Effective communication providing clear guidance is a strategy employed by strong companies to build shareholder confidence. This week, EnWave issued a corporate update as presented by the President and CEO, Mr. Brent Charleton. Prior to the release of full year financial statements for the period ended September 30 2019, the Company recognizes the need to inform shareholders of the positive accomplishments during the year, and present an update on the status of various initiatives. This message from the leadership of EnWave clearly defines the investment case for shareholders to remain optimistic for the future.

Among the topics covered, Charleton discussed the powerful growth plan for wholly-owned NutraDried Food Company. Launched as a demonstration for the commercial potential of REV technology in the food processing subsector, NutraDried has emerged as a legitimate branded snack food company with impressive growth and strong consumer appeal. NutraDried has assembled a powerful roster of retailers in its distribution network. Sales of its Moon Cheese product line are at record highs.

With the performance gains in hand, management determined that revisions to the corporate strategy were required to move NutraDried further along the growth curve. The division was restructured to operate as an independent subsidiary. This involved appointing a new CEO to run the business unit. A dedicated team of sales personnel was also recruited. More focused promotional and marketing programs are planned. New flavors for the product line were launched, and an expansion of the distribution network is underway to include wider coverage in grocery stores.

EnWave also reported a strong order book of REV units in the pipeline that must be completed and delivered on schedule. The Company hired talented engineering and business development personnel in 2019. In addition, EnWave acquired an additional facility to expand its manufacturing capacity. 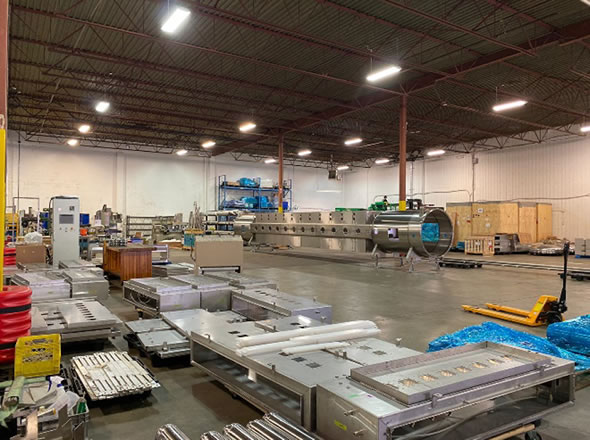 Mr. Charleton highlighted the success of the sales effort since the launch of REV technology. Royalty agreements are now in place with 32 partners operating in a diverse range of market channels. EnWave anticipates the inroads achieved so far with leading corporations will springboard additional sales growth going forward.

The significant milestones achieved so far since the launch of REV processing have positioned EnWave towards a solid foundation. Record sales and revenues are being reported in 2019. Positive cash flow from operations supports a stronger balance sheet. The Company is ranked among the best small cap stocks in Canada. The first three quarters of 2019 have been the best in the history of the Company, and management expects Q4 to continue this trend.

Core operations for EnWave going forward will be bolstered by additional REV machine sales and improved margins. Meanwhile the steady growth in revenues continues from the stream of royalty payments due from partnership agreements. Anticipation of further gains in the cannabis sector, along with other rapid growth channels, will contribute towards achieving sustained profitability.

NutraDried Foods is performing extremely well with a plan in place to secure the next phase of growth. The ongoing sales momentum underway for Moon Cheese snack foods is expected to underpin long term profitability. Consolidation of the recent restructuring effort is progressing. The division should realize meaningful profit growth by 2021.

Combined, both business units are now positioned to secure further gains through the remainder of 2019. As outlined in the CEO’s Message, the financial performance of EnWave has improved and will continue to do so. Looking ahead to the near future, the drive to achieve overall profitability is the next important objective. The development of the Company is progressing on plan. Significant accomplishments have been achieved. Shareholders may look forward with confidence.