Located amidst one of the most productive gold mining regions in Canada, one can find the Francoeur/Arntfield Mines project, which is 100% owned by Globex Mining Enterprises Inc. (TSX: GMX – $0.43 & OTCQX: GLBXF – $0.33 & Fra: G1MN – €0.28). Located about 25 kms west of Rouyn-Noranda in Quebec, the project area has been the focus for gold exploration dating back more than a century. In fact, there are at least six historic gold deposits within the property boundary, a testament to the rich endowment of gold in the region.

The majority of the gold showings and deposits encountered to date from this property have been related to the main Francoeur-Wasa shear zone, part of a structural corridor extending through the district. Ongoing exploration work continues to outline new prospective zones, including recent extensive trenching and sampling that was reported in September 2017.

The Company considers the property to be under-explored with the potential for resource discoveries at numerous portions of the project area that remain untested by modern exploration standards.

One such target area, nearly half a kilometer to the south of the main fault structure, had been largely overlooked until information, obtained from historic maps, indicated trenching and drilling some of which was conducted perhaps as far back as the 1930s. Globex subsequently initiated a preliminary reconnaissance fieldwork program late last fall to investigate.

The Company’s geologists did indeed encounter numerous old trenches, all of which were partially collapsed. The team was able to collect two grab samples from these workings, which yielded positive assay results with gold values of 3.15 g/t and 5.69 g/t.

Following the spring thaw in 2018, a secondary prospecting visit to this area was launched. More extensive sampling work extracted a total of 25 grab samples from the limited exposed rock surfaces inthe old trenches and from outcrops nearby. Assay results confirmed that ten of the grab samples contained gold levels above 1 g/t and among these positive results, two samples carried gold values above 10 g/t. 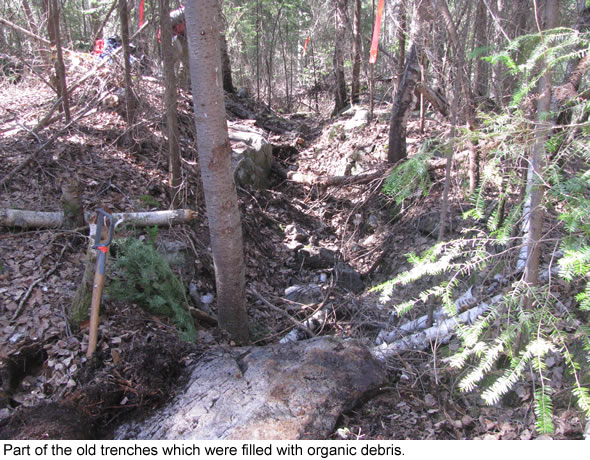 This is considered a very encouraging indication that a promising under explored target area is being defined with the potential to increase gold resources at Francoeur/Arntfield through exploration in areas away from the main gold localizing structure. Globex now views this target zone as an early stage priority exploration target that merits follow up work.

The Company anticipates securing permitting approval within two months, to enable the commencement of the next work program at this particular area of stripping, mapping and channel sampling. The plan is to complete other prep work in the interim, including line cutting to enable a geophysical survey at the new target zone.

Supported by a talented team of geologists, and with the benefit of a well-funded treasury to enable ambitious exploration programs, Globex aspires to build on the magnitude of resources and continue the advance towards defining a development prospect. This opens the option to sell the property to a mine developer at a premium valuation. In addition, it also carries the potential for a long term revenue stream to be derived from retained royalty leverage on any future production.

The Francoeur/Arntfield Gold Mines are just one of many active exploration prospects in Globex’ diverse portfolio. The success in outlining a new priority exploration target on this property represents one more catalyst to add value for the Company overall. Recommendation: BUY