Jupiter Gold Plans Out A Lucrative 2021

Jupiter Gold Corporation (US:JUPGF – $1.93) announced its plans for 2021 earlier this week. It aims to become a revenue generating entity during the year by getting its quartzite mine up and running. It also provided an update to its prospective gold exploration projects in Brazil.

Quartzite Mining Operations Planned For The Second Half of 2021

We have discussed Jupiter Gold’s quartzite mining opportunity in previous articles. We are pleased that the Company provided an update and the plans remain on track. The biggest hurdle, and therefore the biggest positive catalyst once accomplished, is gaining an operational permit from the appropriate regulatory agency for commercial mining. Jupiter Gold is working to get that permit by the third quarter of this year. Once receiving government approval, operations should be straightforward as the mine will be a simple open pit operation. Brazil is well-known for its quartzite exports and Jupiter Gold should have no issue finding the qualified workers and equipment for operations. Combine that with the Company’s experienced management team and we believe this will be “low-hanging fruit” cash flow.

Jupiter Gold’s 100%-owned Quartzite Project comprises of four quartzite deposits across 2,152 acres. The Company estimates a total of 3.7 million tons of quartzite contained within the four deposits. Given that the average selling price of quartzite is in the range of $1,800 to $2,000 per cubic meter, it’s clear that this can be a very lucrative operation for years to come. The Company expects that the Quartzite Project could last a decade or more with net margins of at least 60%.

As we have mentioned in more detail in previous articles and our latest Research Report, Jupiter Gold has several gold exploration projects across Brazil. The two projects the Company plans to mainly focus on in 2021 will be Alpha and Alta Floresta. The Quartzite operations will provide more than enough cash flow to support drilling at these locations and speed up the timelines of their development. 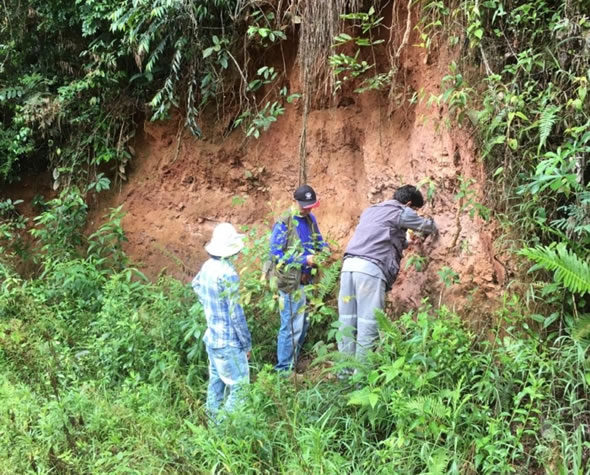 Geologists at work at the Alpha Project

Jupiter Gold has been aggressively expanding its 100%-owned Alpha Project. In 2019 it had one mineral right with 4,653 acres but has since purchased eleven more to increase its total land package to 34,911 acres. The project is situated entirely within the Rio das Velhas Greenstone Belt, referred to by experts as “Brazil’s premier gold province”. The initial NI 43-101, which covers only 2% of the project’s area, already has an estimate of 82,300 ounces of gold. This is over $150 million US worth of gold in just one barely explored project. Multiple geological studies are ongoing which indicate the potential for far more gold mineralization to come.

The Alta Floresta Project comprises of three mineral rights across 24,395 acres. It’s located in the Alta Floresta Auriferous Province, another well-known gold producing area along with copper, in the state of Mato Grosso. One of the mineral rights sits next to a gold mine which produces over 125,000 ounces of gold annually. The Company’s technical team believes that the geology of that mineral bodes well for the prospects of Jupiter Gold eventually developing its own gold mine. If this is the case, the Quartzite operations will enable the Company to self-fund the capex to build out the mine. One of the mineral rights also shows strong potential for copper and manganese in addition to gold, both of which are important to the development of electric vehicle batteries.

Jupiter Gold Is A Great Value For A Very Cheap Price

Jupiter Gold has only 5.8 million shares outstanding and no debt. Given that the quartzite operations are expected to provide cash flow to fund the Company’s foreseeable needs, we don’t expect a major requirement for financing going forward. That makes Jupiter Gold’s valuation of $7 million very enticing. An investor would be hard pressed to find a similar company on the OTC or TSX Venture Exchange that could be purchased for such a low valuation that offers the type of land package that Jupiter Gold has while also having a low risk of dilution.

Jupiter Gold remains under the radar and very thinly traded, though it has picked up in volume to the point where shares are traded nearly every day. Those investors with the patience to accumulate and hold the stock throughout 2021 until the Company shows cash flow positive operations and strong gold exploration results should be well rewarded. Smallcaps Recommendation: BUY with a price target of $2.40.