Copper is now in a strong bull market. Spot prices have increased by more than 65% over the 2020 lows. Much of worldwide copper production is sourced from large porphyry-style deposits, which are typically owned and operated by billion dollar mining companies.

Through a fortuitous series of events, one of the oldest known porphyry copper deposits is now owned by a 20 million dollar junior explorer. The Haib copper deposit, located in Namibia, is an advanced large scale porphyry project that has generated historic, high grade copper production by previous operators. Deep-South Resources Inc. (CA:DSM – $0.18, US:JAUGF – $0.14, GER:DSD – €0.10) has secured 100% ownership of this attractive asset through a transaction with former majority owner Teck Namibia Ltd. DSM is now engaged towards resource optimization and the objective to advance the project as a development candidate.

This week DSM reported that it has commenced a significant drilling program at Haib. The first drill is now turning, and a second drill is being mobilized to the property. A program for 10,000 meters of total drilling is underway, with a focus towards definition of a higher grade zone of the deposit. The Company plans to advance the project along the value curve to the feasibility stage. 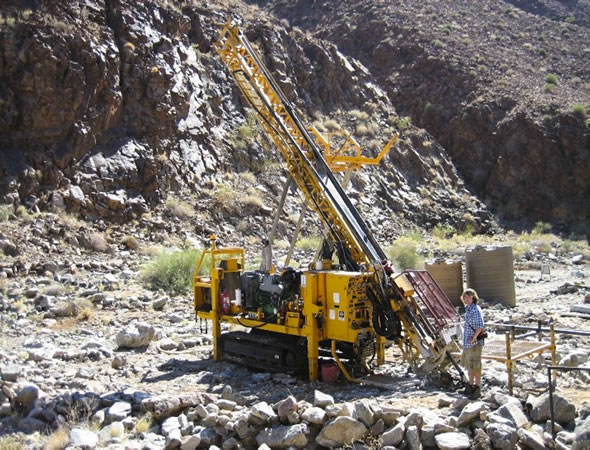 Ferrodrill has delivered the first drill at the Haib copper project, while a second drill is currently being mobilized and will be on site in the coming days.

The mineralization at Haib is ideally suited for a low-grade open pit porphyry copper deposit. However, there is potential for a higher grade zone to be defined. In 2019, DSM noted that some sections of drill core showed materially higher copper grades than what was encountered elsewhere in the deposit. Detailed mapping by geologists highlighted a structural trend of veins, steeply dipping to the southwest. Most of the previous drilling work failed to intersect these higher grade veins.

DSM has interpreted the potential orientation for this zone and will target this zone with optimum drill orientation in order to intersect these structures. Through all of the historic exploration programs launched by previous operators, the current program with DSM is the first drilling effort to specifically target this higher grade area.

The Haib high-grade area (red contour) contains 140M tonnes of resources, and is open to the east and west, and contains two other pits to be defined by further drilling.

In the first phase of drilling, about 5000 meters of work is scheduled for infill drilling. In addition to the higher grade structural targets, gap zones between previously completed drill holes will be addressed. The plan to increase drill density will pay off with a more complete database that can in turn support an upgrade of the resource estimate. The Company also plans to complete some deeper drill holes to test the potential for expansion of the deposit zone below 350 meters.

A previously completed Preliminary Economic Assessment has already presented robust economic potential for the project. The current resource amounts to 3.12 billion pounds with an average grade of 0.31% copper M&I, plus another 2.19 billion pounds Inferred with an average grade of 0.29% copper. As drill density is upgraded, with the potential for new higher grade zones to be added, DSM expects to present a larger and more attractive overall resource. Upon completion of the program, DSM will compile the additional data to update the NI43-101 resources for the project. Management plans to move forward to complete a feasibility study thereafter.

The enormous scale of a typical porphyry copper deposit may present a challenge for smaller junior explorers to effectively advance. Expansive drilling programs are required to effectively delineate these deposits. The time and financial burden is often beyond the limits of a smaller explorer. For DSM, securing ownership of the Haib project afforded the Company a head start. Much of the exploration process had already been completed by prior operators. DSM is now in the position to address project optimization objectives on the path towards a mine development plan.

Identification of the potential for a higher grade copper-molybdenum zone is a big step forward. Launching the significant current exploration effort, amounting to 10,000m of total drilling work, may create a compelling value proposition for the company. A material addition to grade and resource leverage for the deposit may tip the economics towards an even more compelling scenario for mine development. Located within an attractive jurisdiction, Haib is a formerly producing mine that offers both the size and grade to support a long term profitable copper mine.

A successful drilling effort may therefore be expected to support a higher market value for DSM. The steady flow of news through this extensive program will also be a potential catalyst for higher share values as assay results are reported.

Meanwhile, Deep-South Resources remains under the radar. The Company is significantly undervalued as it only has a market cap of around $20 million, with 5.3 Billion lbs of copper in the ground. Other companies, such as Solaris Resources, with a comparable copper resource trade at a market of $630 million, or 31 times the one of DSM. This is a clear and obvious buy. Smallcaps Recommendation: BUY.