Innovative Food Holdings, Inc. (IVFH – $1.23), reached record sales in its fourth quarter and full year 2014, ending December 31, 2014. The results for the first time included the impact of the Company’s August 2014 acquisition of The Fresh Diet, Inc.

Fourth quarter 2014 revenues were approximately $10 million, up 64% compared to revenues of $6.1 million in the fourth quarter of 2013. Revenues attributed to The Fresh Diet in this quarter were $3.1 million. For the year ended December 31, 2014 total revenue was $30.8 million, an increase of approximately 37% compared with fiscal year 2013.

The Company enables, through a fully managed specialty food platform, the distribution of direct from source specialty food products in the United States. It’s active in two distinct market segments.

In the professional foodservice channel, Innovative Food Holdings’ platform manages the nationwide sales, sourcing and procurement, logistics, customer service and distribution of over 7,000 specialty food products. Many of Innovative Food Holdings’ products are used on a daily basis by some of the approximately 40,000 leading professional chefs across the United States. Customers include restaurants, hotels, country clubs, national chain accounts, casinos, hospitals and catering houses.

And in the direct to consumer channel, The Fresh Diet is the nationwide leader in freshly prepared gourmet meals delivered directly from kitchen to consumer doorsteps in 12 states, 44 metropolitan areas and over 570 cities and towns across the United States.

The Fresh Diet Acquisition and Integration

On August 15, 2014 Innovative Food acquired The Fresh Diet, America’s No. 1 fresh gourmet specialty daily meal delivery company, which operates the industry leading direct to consumer specialty meal platform. The total purchase price for the acquisition was 10 million shares of the Company’s common stock plus the assumption of debt. 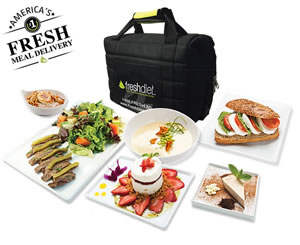 Since then, The Fresh Diet was able to attract Bryan Janeczko as new CEO. In 2003, Mr. Janeczko co-founded NuKitchen, a provider of premium, fresh prepared meals designed to promote weight management and healthy living. NuKitchen was the first of its kind, operating on a proprietary technology platform to deliver a complete days’ worth of fresh, made-to-order meals on the day customers required them. After raising approximately $2 million in venture capital with NuKitchen and driving 100% year over year revenue growth for five years, NuKitchen was subsequently acquired by NutriSystem Inc. in 2008.

In addition to Mr. Janeczko’s successful exit in the freshly prepared meal space, he has vast experience in developing and advising early stage food and foodtech companies in executing successful, scalable business initiatives. Mr. Janeczko’s most recent success was leading the development and commercialization of Crock-Pot Cuisine, a direct to consumer, subscription-based, meal delivery service for Jarden Corporation, a Fortune 500 consumer products company.

Mr. Klepfish CEO of Innovative Food Holdings commented: “The Fresh Diet team had built a solid and growing business prior to the acquisition by Innovative Food Holdings; at the same time, it had faced significant challenges as it transitioned from a fast growing startup company, with a focus on revenue growth at all costs, to a data driven, process driven business, with a focus on profitable long term revenues. With that in mind, I believe that Innovative Food Holdings’ ability to recruit and retain top talent with the domain expertise and reputation of Bryan Janeczko, has created the long term potential to grow sales and profits of The Fresh Diet, even beyond our initial expectations. In the few short weeks that Bryan has been on the team there has been a strong focus on growing The Fresh Diet brand, employing data-driven, short and long term revenue focused decision making, and bringing in high caliber marketing, sales, and culinary talent to The Fresh Diet leadership team.”

Innovative Food Holdings’ revenues for the professional foodservice segment grew to $25.8 million in 2014, an increase of approximately 15% compared to 2013.

According to The Specialty Food Association, specialty food sales during 2013 grew to over $88 billion, with 3 year sales growth averaging 18%.

This specialty food service, or professional foodservice channel, continues to offer significant growth opportunities with little infrastructure spend in multiple markets. We view this service as a key driver for Innovative Food’s business. In addition, there are multiple expansion and acquisition opportunities.

The Company’s second target market, the meal delivery space, is one of the biggest foodtech trends in the market today, and The Fresh Diet is the nationwide leader in freshly prepared gourmet meals.

As a result, the medical community, restaurants, food service providers and food and drink manufacturers are increasingly responding to these demands. So we’re confident that The Fresh Diet is uniquely positioned to capitalize on various emerging consumer foodtech trends.

The Company’s financials are currently being impacted by the Fresh Diet acquisition, but we feel confident that in the coming quarters this situation will be rectified. Hold on to your shares.