With the final batch of assay results from the extensive Parbec drilling program in hand, exploration to advance the nearby Surimeau property has now become the focus for Renforth Resources Inc. (CA:RFR – $0.09 & US:RFHRF – $0.07 & GER:9RR – €0.05).

Recent work has been concentrated on the Victoria West target. This area is emerging with the potential to evolve into a significant battery metals deposit. Assay results are still outstanding for a previously completed drilling program. The Company opted to proceed with surface stripping work to expose near-surface sections of structure between two drill holes from the summer drilling program.

This week, Renforth issued an update on the progress at Surimeau. Approximately 130 meters of the surface bedrock has now been exposed at the eastern portion of the structural target area. This represents about 40% of the planned program. Early observations from this exposed surface area are very encouraging. A handheld XRF diagnostic unit is being used to determine preliminary mineral content and illuminate sampling targets. Low grade nickel and zinc sulphide alteration hosted within ultramafic bedrock have been observed in continuous mineralization throughout the stripped corridor. This band of alteration averages about 35m in width. 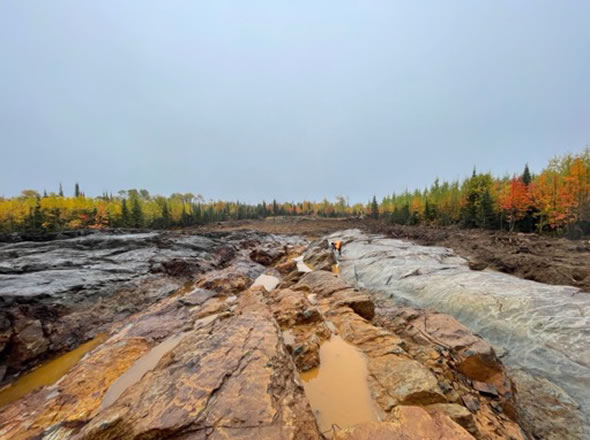 Stripped Area to Date – The central deformation zone is stained orange (oxidized), to the right is the ultramafics in the south, to the left is the altered ultramafics to the north.

This work confirms the interpretation of geophysical surveying. Attractive mineralization was also observed earlier within the ultramafic rock units in drill core. Renforth is validating the promise of this expansive target through the steady progress in the field. Samples have been selected and submitted for laboratory assaying.

The stripping program was planned using compressed air so as not to put additional demands on the available local water resources. However, moderate rainfall during the early phases of work accumulated in surface runoff. This was captured by the field crews to enable power washing of the exposed bedrock, a much more effective means to clear debris. Renforth will remain proactive to maintain a positive relationship with the local community. This is also why the Company has opted to pause work for 10 days now to avoid interference during the hunting season.

Visual mineralization has been observed within the stripped area, including sulphide minerals of nickel, copper and zinc. The strongest alteration observed so far is located within a deformation zone in the central section hosted within ultramafic rock units. Smaller vein stringers and isolated showings were noted bearing chalcopyrite, pyrite, sphalerite and pyrrhotite. The ultramafics transition to finer grained mafic rock to the north of this zone where pentlandite, a common mineral encountered in nickel deposits, was observed. 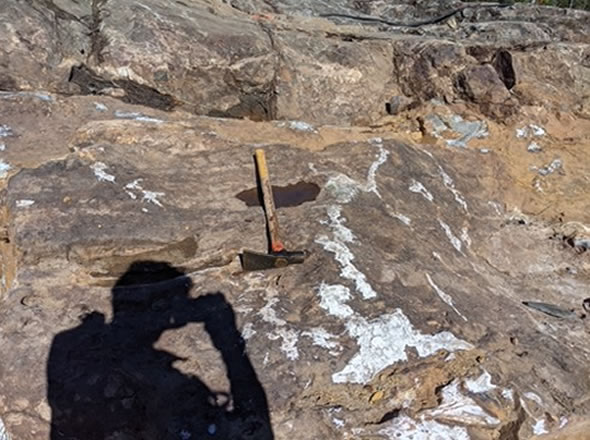 Zinc Oxidation in Stripped Area after 4 Days of Exposure

With the completion of stripping at the eastern zone, the field crews will shift activity to the western portion of the structure. Stripping work will also be completed in the vicinity of previously completed north-south oriented cross-cut trenches. The contact zone between the ultramafic rock and the adjacent sediment units may be exposed in this section. The geologists also anticipate that mafic volcanic rock units may also be encountered as work continues. This would be a favorable outcome given that some mineralization observed earlier in drill core was hosted within mafic rock. Renforth is delighted with the results so far. All of the various geological settings and mineralized showings will be documented to guide further exploration objectives.

When considering the challenge of conducting effective exploration across such a large prospective property area, an incremental approach often works best. Renforth has advanced several small and focused phases of work at the Victoria West target over the last year. The current fieldwork program follows on the heels of a successful drilling effort that has now confirmed a deposit extending more than 2.2 kilometers along strike. At this stage drill holes are widely spaced, often 200m apart.

Renforth recognizes that valuable information about this extensive mineralized system may be gained through inspection of alteration features exposed at surface. The opportunity to complete surface stripping is therefore an ideal strategy at this early stage. Extraction of samples from various rock units of the main structural zone will provide additional geological data.

Note that sampling at one of the outcrops from the Hudson area, another emerging target at Surimeau, has already demonstrated that mineralization was carried in the host rock adjacent to quartz veining and alteration features. Similar mineralized halos have now been observed at Victoria West. Other interesting hints and clues regarding the structural controls affecting mineralization may also be learned. A larger database of sample values and alteration characteristics will be available following this work.

Successful interpretation of the early potential at Surimeau encouraged Renforth to proceed with a systematic exploration process. So far, this work has delivered a promising discovery that grows in magnitude as each phase is completed. Completion of cost-effective fieldwork is an effective strategy at this stage. The additional information from these programs will contribute to more successful progress in subsequent rounds. Renforth remains lavishly funded with an aggressive posture to continue active exploration at Surimeau. The steady flow of assay results from this process will build speculative interest in the stock as work advances. Smallcaps Recommendation: BUY.