News » 3 Quebec Assets In The Spotlight At Globex Mining Enterprises

3 Quebec Assets In The Spotlight At Globex Mining Enterprises

This is of great interest for Globex Mining Enterprises Inc. (CA: GMX – $0.33 & US: GLBXF – $0.25 & GER: G1MN – €0.23), as it controls about half of the crater formation, immediately adjacent to the Imperial property ground (see map below). Consequently, a successful outcome for Imperial Mining, also increases the potential of a similar discovery on Globex’s adjoining property. Imperial reported this week, a positive outcome from their first two drill holes. An old drill hole by a previous operator of the project area encountered a 19m interval with an average grade of 506 g/t scandium oxide. This was roughly 600m to the south of the current Imperial Metals drilling. Imperial Mining reported assay results for just the first two drill holes which included a high-grade zone of more than 48m with an average of 385 g/t scandium oxide. The current market price of 99.99% pure scandium oxide ranges from $2.00 to $4.00 US per gram (closer to $4.00).

Combined, the recently completed drilling, mapping and interpretation of magnetic anomalies by Imperial Mining has outlined a strike length of pyroxenite in which the scandium is found extending 4.5 km. It is quite possible that a target zone of similar magnitude can be outlined on the Globex claims, within the same pyroxenite horizon around the crater rim that is observed on the Imperial Mining holdings.

In addition to scandium oxide, rare earth elements and yttrium are also associated with this horizon, adding further potential economic interest to Crater Lake. While exploration remains in early phase the grades that have been reported so far are indeed attractive. It is likely that follow up exploration work will be scheduled by Imperial Mining. Assay results are still pending for 3 additional drill holes.

Globex also reported an update on the progress of drilling work at the Bateman Bay project’s C-3 Zone. Land holdings include several formerly producing mines in the highly prospective Chibougamau copper/gold district of Northern Quebec. Ownership was spun out by Globex in 2012 into a separate listed company, Chibougamau Independent Mines Inc. (CBG-TSXV, CLL1-Frankfurt, Stuttgart, Lang & Schwarz, CMAUF-OTC). A 3% Gross Metal Royalty on the spun out properties is retained by Globex.

Portions of the two most recent drill holes yielded wide sections of robust copper-gold mineralization. The highest grade interval came in the deepest hole (450 m vertical), hole BJ-18-19 where a section of 9.2m averaged 7.7% copper, 3.58 g/t gold and 33.25 g/t silver. This is promising for further high-grade expansion of the zone to depth and along strike when the next round of drilling work commences at this target. 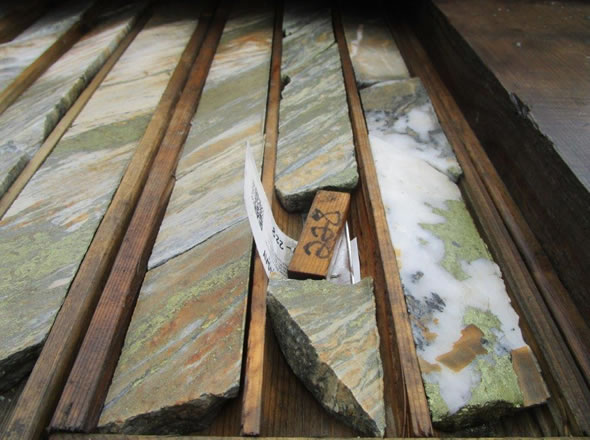 One other encouraging aspect to these assay results is that metal grades typically encountered in the Chibougamau area range from 1-3% copper often with an average of 1 g/t gold. Taken in this context, the latest drill results on the C-3 Zone are indeed significant and perhaps indicative that a higher grade deposit may be in the offing.

The C-3 Zone has been proven to extend from surface down to at least 450m in depth and remains open for further expansion in all directions. The polymetallic content of the target area was also encouraging as attractive silver values were encountered along with the gold and copper. Moreover, CBG completed assays for cobalt and was rewarded with values in the range of 0.02% – 0.03% Co across significant intervals of all of the drill holes assayed. 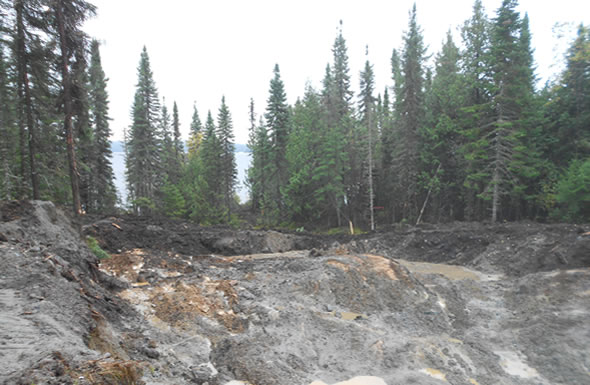 Part of the stripped area at the C-3 Zone

On topic of the C3 Zone, CBG completed a $1.06 million private placement earlier this week. Part of the proceeds will be used to drill the new C-3 copper/gold zone. Drilling will start as soon as permits are received.

This week Globex reported assay results from the latest round of exploration drilling from its advanced Francoeur/Arntfield property in Quebec. While the main focus remains on the emerging gold discovery at the 450 Gold Zone and South Zone of the project, follow up targets were identified based on induced polarization anomalies outlined from a previously completed induce polarization geophysical survey (IP).

Drilling on these IP targets did indeed intersect numerous narrow gold intervals of up to 3.33 g/t over a 1.5m interval. The values however were not considered attractive enough to warrant further consideration for these targets at this time. Instead, Globex will now focus on a series of cross cutting structures that traverse the 450 Gold Zone, outlined through mapping and field work last summer, which may be related to the gold emplacement.

Although this latest round of activity at Francoeur/Arntfield may be considered disappointing, it should be noted that comprehensive exploration demands the evaluation of preliminary data to determine target areas. Not every target however generates a successful outcome. The new 450 Zone was not drilled during this drill program.

Francoeur/Arntfield is an exciting gold project with a robust gold endowment and numerous untested target zones that may yet contribute to a larger overall deposit. The company remains committed to continue with its efforts to outline a productive gold deposit.

The shrewd response by Globex’s management to secure adjacent land holdings at Crater Lake for minimal cost, may result in another profitable venture for the Company. Since there is no scandium deposit currently in production in North America the Crater Lake project has become much more attractive with the results reported by Imperial Mining. Globex may now advance with its own drilling program to validate and confirm that exploration potential or it may await a potential offer to vend this project at a premium.

The successful transaction history has played a role in the advancement of the Bateman Bay (C-3 Zone) and Francoeur/Arntfield projects. Globex was proficient to select properties of merit, and secure acquisition cheaply through staking or assembling parcels of holdings in transactions with other companies.

The corporate strategy for Globex has leveraged to a large number of active exploration projects, each with the potential to advance along the value curve through the discovery of new resources. The many successful outcomes reported so far from these ventures are more important than the inevitable reality that some of the targets investigated will not add to the resources. Smallcaps Recommendation: BUY.