What may sound as a regular product launch, is in fact a very important event because these snacks are produced with EnWave Corporation’s (TSXV:ENW – $1.00 CAD & OTC:NWVCF – $0.72 USD) Radiant Energy Vacuum (REV) technology.

During an investor presentation, held a few days ago, Hormel unveiled the snacks, which are available in three flavors: classic, bacon and teriyaki. Spam Snacks will launch this summer in a number of select markets and grocery stores in the United States. If the launch is successful, the snacks will be introduced across the U.S.

James Splinter, group vice-president of Hormel’s Grocery Products unit commented, “This represents a breakthrough innovation. We were inspired by the candy bar bites that have been a hit for many candy companies. We think bites are very on-trend, and these fun-to-eat Spam brand product snacks are a perfect complement to the fast-growing dried meat snacking category”.

Hormel continues to live up to its founder’s mission: “Innovate, don’t imitate”, by providing new products to meet the demands of an ever-changing consumer base. By 2016, the company aims to generate $3 billion in sales from products launched since 2000. In order to accomplish this, the Fortune 500 company formed a corporate innovation team to develop “game-changing products”. One of these products is Spam Snacks. 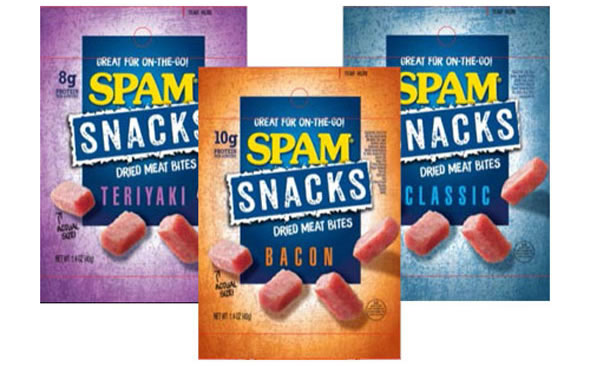 In addition, Skippy P.B. Bites, featuring a crunchy center with a soft peanut butter coating, is also being launched. Since acquiring the Skippy brand from Unilever for $700 million in early 2013, Hormel has introduced several line extensions. Note that the latter two snacks will not be produced with EnWave machinery.

Sales and Royalties for EnWave

In June 2013, Hormel Foods signed a royalty-bearing commercial license with EnWave to use nutraREV machinery. Early 2015, after conducting successful technology, product and market studies, Hormel entered into a purchase agreement for a 100kW commercial nutraREV unit. The machine is currently being installed in Hormel’s production facility in the United States and will produce the Spam Snacks.

In addition to the 100kW machine order, Hormel agreed to purchase a 2kW REV machine for product development and a 10kW REV machine for market studies that it already had in use. This indicates that they want to continue developing new products with EnWave’s technology.

We expect the sale of the commercial REV machine to generate approximately $1.2 million in sales and royalties should vary between $200,000 and $400,000 per year at full utilization.

Hormel’s new products capitalize on consumers’ appetite for portable, high-protein foods. Thanks to this giant’s experience and market penetration, we believe these snacks will do well.

Hormel Foods is EnWave’s first commercial partner to use the REV dehydration technology for the production of meat snack products. EnWave will receive the initial royalties from this deal later this year. If the snacks become a success, Hormel could buy additional REV machines.

We expect news from the Bonduelle commercial startup and the launch of Moon Cheese snacks in 3,500 locations of a major coffee chain shortly. EnWave remains a buy recommendation.