News » GreenPower Motor On Verge of Breakthrough with All-Electric Buses

GreenPower Motor On Verge of Breakthrough with All-Electric Buses

Five years ago, electric cars were a novelty and electric buses were still a thing of the future. The rapid advancement of the electric bus technology, and the general adoption of electric vehicles, have caused transit agencies to conclude that electric buses can meet their operational needs while reducing noise, energy use, and pollution. Moreover, the significant initiatives and incentives that exist are confirming the zero-emission future is now.

GreenPower offers a range of electric powered buses deploying electric drive and battery technologies with a lightweight chassis and low floor or high floor body. The Company integrates global suppliers for key components such as Siemens for the two drive motors, Knorr for the brakes, ZF for the axles and Parker for the dash and control systems. This OEM platform allows GreenPower to meet the specifications of various operators while providing standard parts for ease of maintenance and accessibility for warranty requirements.

With hundreds of thousands of buses in the United States alone, the market is enormous. In addition, the public transportation market is largely serviced by legacy products that need to be electrified.

GreenPower Motor is not a futuristic Company that may, or may not, have products on the market one day. Instead, the Company is manufacturing and selling 100% electric buses today. In fact, GreenPower is starting to conquer the market for electric buses, as it recently received its first substantial orders.

Most electric buses are still slightly more expensive up front than their internal combustion counterparts. But because they save so much on fuel and maintenance costs the total cost of ownership over their lifetime is lower.

GreenPower’s all-electric double decker bus (see video above) is a game changer in the industry. With seating for 100 passengers on a bus that is 45 feet in length, it counts more than double the seating capacity of a traditional 40 foot transit bus. The EV550 is also a very diverse product: transit operators can show case their city, tourist or shuttle operators can move a significant number of people in comfort, and technology companies can provide transportation for their staff with a bus configured specifically for their workers’ needs.

Moreover, the price of the base model GreenPower EV550 double decker is not only on par with for example, the combustion engine driven Alexander Dennis Enviro 500, it also seats about 15 passengers more and incurs less than half the cost to operate!

Overall, the EV550 offers the lowest acquisition and total cost of ownership per seat of any heavy-duty transit bus in North America, diesel or otherwise, and is a testament to GreenPower’s exceptional product development team.

A major development in 2016 for GreenPower was its high-floor Synapse line of electric school buses and shuttle buses.

The high-floor design of the Company’s school buses and shuttle buses results in increased safety and a far better ride. Also in this case, GreenPower is delivering a cost-effective, innovative green solution to a marketplace that is outmoded.

Volkswagen AG has agreed to settlements with the United States Environmental Protection Agency for violation of the Clean Air Act for diesel vehicles that emitted up to 40x more emissions than legally allowed.

GreenPower is presently engaged with a number of organizations in analyzing their fleet for eligible buses so they can purchase a new all-electric school bus, shuttle bus or transit bus under the VW Mitigation Trust program.

“With our low floor, high floor and double decker buses, we are the only company with a complete range of all-electric buses that can take advantage of all of the Mitigation Actions that are available for all-electric buses under this program,” said Brendan Riley, President of GreenPower.

In addition to the VW Mitigation Trust program, the past few months GreenPower’s EV550 45 foot all-electric double decker bus, as well as the Synapse 72 all-electric Type D school bus were approved by the California Air Resources Board (CARB) and declared eligible for a Hybrid and Zero-Emission Truck and Bus Voucher Incentive Project (HVIP) of $95,000 for each such bus sold in the State of California.

As the word of GreenPower’s cost-effective 100% electric buses is spreading, its order books are filling up nicely. Below is and overview of the most recent orders received by GreenPower.

A couple of weeks ago GreenPower entered into a Memorandum of Understanding (MOU) with Colville Gaming, for the latter to acquire five GreenPower all-electric shuttle buses to replace existing legacy buses and an option for Colville to acquire an additional five buses. GreenPower will also provide the required charging infrastructure and the training for drivers, maintenance and support staff to create a Center of Excellence for Colville.

As outlined in the MOU, GreenPower and Colville Gaming, LLC will work together to pursue grants, vouchers and incentives including the recently announced VW Mitigation. 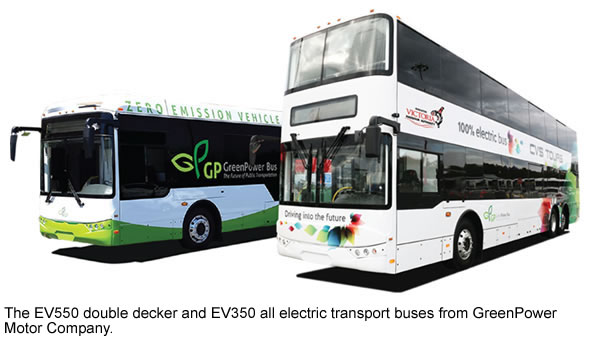 In March of 2017, the Company entered into a sales contract with the City of Porterville in California to supply 10 GreenPower EV350 transit buses for deployment on all nine Porterville Transit routes. The order includes 11 charging systems to be installed at the maintenance facility and transit center for a total purchase price of approximately $9 million.

The first bus is scheduled to be delivered in the fall of this year with the remaining nine buses three to four months later. When deployed, this will be California’s first all-electric transit system, a truly ground-breaking development for the industry.

“This conversion of the entire Porterville transit system to GreenPower zero emission buses is the most innovative project that I have been part of to date and it is ground-breaking for the industry,” stated Brendan Riley, President of GreenPower. “In addition, we have 20 buses available on this contract for other transit properties including the San Joaquin Valley Air Pollution Control District who are seeking to deploy not just a zero-emission vehicle, but a zero emission solution.”

A month earlier, GreenPower signed an MOU with the Tule River Economic Development Corporation for the acquisition of ten all-electric buses to replace existing legacy buses. GreenPower will also provide the required charging infrastructure and develop a solar collection for a sustainable energy source.

“We are excited to be working with GreenPower to electrify our fleet. Some of our buses date back to 1987 with several of these approaching one million miles in operation. GreenPower will help train our drivers and maintenance crew” said the President of TREDC.

As GreenPower Motor is in the progress of transitioning from a development stage company to a production company, its revenue is still negligible.

In this stage, the ability to raise sufficient funds is extremely important. GreenPower has already shown that it’s capable of doing that.

After paying the costs of the private placement, the net proceeds will be primarily used for production of electric buses, as well as testing, sales and marketing, and general working capital.

In May, June and October last year, the Company raised over $1.11 million in three separate private placements. In addition, in December of 2016 it received proceeds of over $2.1 million – including $1 Million from the directors and employees of GreenPower – as a result of the exercise of 4,523,318 previously issued common share purchase warrants and stock options.

The cost of batteries has declined sharply over the past five years, while the capabilities of the batteries used by GreenPower have improved significantly, making the use of GreenPower all-electric buses a viable alternative to a traditional diesel bus.

It is anticipated that a GreenPower transit bus will generate estimated annual fuel savings of up to US$35,000 (calculated in late 2016) compared to a diesel bus, not including maintenance savings. A case study from a significant transit authority in the State of Washington determined that an electric transit bus is the best option based on cost of ownership.

The CARB incentives result in a compelling value proposition where buying GreenPower electric buses make it easy to go green. GreenPower’s EV350, EV550, and Synapse Type D electric buses each qualify for $95,000 vouchers under the program.

Moreover, GreenPower believes that a significant portion of the $2.9 billion from the VW Mitigation Trust will be used to acquire new all-electric transit buses, shuttle buses and school buses.

Because GreenPower Motor will soon start to generate meaningful and sustainable revenue as it has secured several important contracts lately, we feel that this is an ideal time to initiate a position in the Company.