The Cadillac Break is a significant geological structure trending laterally through much of Quebec. A highly productive district of mines and exploration projects is clustered along this corridor. Among these, is the New Alger property, which is 100% controlled by Renforth Resources Inc. (CA:RFR – $0.04 & US:RFHRF – $0.03). Approximately 1.4 kilometers of the Cadillac Break structure extends through the northern portion of the New Alger property.

Along with established resources from the mine zone, more recent exploration work contributed to outline additional gold mineralization for the New Alger project. Renforth presented its maiden resource estimate for the property in 2014 with an inferred resource of 237,000 ounces of gold. The Company considers this just a starting point.

Several vein systems have been identified within the property area. Gaps exist between previously completed drill holes where the continuity of gold zones may be added to the overall resource as the drill density is increased. Additional untested targets are interpreted along strike from the main zone, and below the mine workings.

Renforth moved ahead with the first drilling program on the property in almost 5 years, and multiple gold bearing intervals were identified in the drill core. This week the Company reported the assay results from these sections. 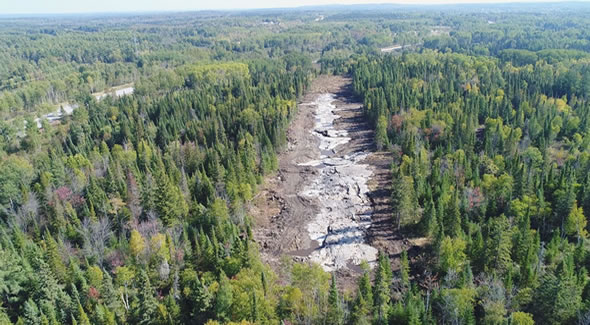 Cadillac Break and Mine Area Results

Drill holes 35, 36 and 37 were completed at the eastern portion of the mine area. This drilling was designed to intersect the three main vein systems further to depth from previous drilling work. Each of the vein systems was successfully intercepted during the program.

This target area was highlighted by an interval of 1.9m with 11.83 g/t gold in Vein #3 from drill hole 35. The interval was part of a larger section of 4.8m where an average assay of 5.38 g/t gold was reported. Further below in this drill hole, a half-meter section of 11.2 g/t gold was also reported, within the Sericite zone. In drill Hole 36, the Sericite zone extended for 3.2m with an average grade of 2.15 g/t gold. Drill Hole 38 encountered wider sections of lower grade gold.

One promising aspect to these results was the mineralized sections of 3m or wider that were commonly encountered. Wider intervals contribute to the definition of a greater tonnage of rock. The combination of tonnage and grade will add clout to the overall gold resource. In addition, in the event that mining resumes at this deposit area, wider gold zones are more economic for underground mining activity.

The sericite encountered in this program is a new discovery located north of the mine area veins, in an area of the Cadillac Break which has never been drilled. This discovery adds about 40m to the width of the mineralized corridor, in addition to the 100m wide mine zone. The sericite zone opens up intriguing potential to develop a much wider deposit area, over the entire length of the Cadillac Break, as subsequent exploration is completed beyond this section.

The remainder of the 10-hole program was targeted in the Discovery Vein area. Extending for more than 500m, the Discovery Vein target is oriented roughly parallel to the Cadillac Break, but hosted within an entirely different geological setting. The target area was defined from previous trenching and sampling work, about 250m south of the mine zone area. This section of quartz veining in sediments has never been drilled by anyone.

Drilling was completed in three pairs, oriented to test for near surface and deeper intervals from each pad. The final drill hole was punched under an access trail. The entire 250m of the stripped strike length of the vein system was targeted in this program.

This first drill program has confirmed surface results down to a depth of 120m, creating a new gold zone at New Alger. The Discovery zone remains open to depth and along strike, for subsequent follow up drilling work.

There are several important aspects to this latest update. Firstly, all of the drill holes in this program successfully encountered gold. The widely distributed presence of gold alteration, often with multiple gold zones in each drill hole, increases the potential to establish a more significant overall resource at New Alger.

Each of the target areas included new discovery zones where no previous drilling had been undertaken. This is a validation of the approach employed by Renforth geologists. The exploration team considered potential gold zones beyond the obvious historical focus within the structural corridor. Their success at this early stage is very promising given the wide property area that remains unexplored.

The new Sericite zone is an attractive element to the evolving discovery. The range of distinct gold showings encountered throughout the project is another indication of the high discovery potential.

Renforth has determined that the results from this work are extremely positive. The exciting potential for further discovery to follow up on these zones has prompted the Company to immediately launch another drilling program. A small financing was completed late last year to raise funding for this work.

Consistent with the no-nonsense approach that Renforth has demonstrated in the past, the next round of drilling work is scheduled to commence in just a few days. This immediate commitment to continue drilling at several sections of the property positions the Company among the more active explorers in the entire district.

Aggressive exploration activity and successful discovery results are important factors to build market value for a junior explorer. From this work, the Company is establishing itself as one of the most exciting exploration stories in Canada. Smallcaps Recommendation: BUY.