News » Globex’ Zinc Royalty Income from Nyrstar On The Rise

Globex’ Zinc Royalty Income from Nyrstar On The Rise

In total, the Company has received royalty payments of just over CDN$1 million from Nyrstar since the mine was restarted in May 2017. For December 2017, which is a short month due to the Christmas and New Year’s break, Globex received royalties of US$133,199 or CAD$170,109 based on an average zinc price of US$1.45 per pound.

Because production at Mid-Tennessee is still ramping up, and because zinc prices have since climbed higher, royalty payments are expected to increase. At full capacity, Globex anticipates receiving royalty payments from Nyrstar of well over CAD$2 million per year. This is a very attractive financing method to advance Globex’ other projects without any shareholder dilution.

At last count, Globex had 35 royalty arrangements in effect at various stages. One of Globex’ other royalty assets is the Chubb Lithium property, which is 100% owned by Great Thunder Gold Corp. (TSX-V: GTG).

In May 2016, Thunder Gold optioned the Chubb and Bouvier lithium properties from Globex. Under the option agreement, Great Thunder could acquire both assets in exchange for:
• A one-time payment of $60,000;
• 2,400,000 shares of Great Thunder; and
• A 2% Gross Metal Royalty (GMR) on all mineral production from the properties.

Great Thunder has met all these conditions since.

The Chubb and Bouvier lithium properties are located in the Preissac-LaCorne plutonic complex of the Abitibi Greenstone Belt near Val d’Or, Quebec. This complex is recognized as one of the best prospective areas for lithium mineralization, as the geological setting and structure of the volcano-sedimentary assemblages form an ideal host for lithium-rich pegmatites.

The plutonic complex generated the Quebec Lithium mine for which Canada Lithium reported measured and indicated resources of 29.3 Mt grading 1.19% Li2O and 20.9 Mt of inferred resources grading 1.15% Li2O, respectively.

The Chubb property lies 32 kilometres north of Val d’Or and consists of 35 contiguous recorded mineral claims with a total area of 1,509 hectares. Exploration of the property persists since the early 1950s and has consisted mainly of mapping, trenching, geophysical surveys and diamond drilling.

The Bouvier property, on the other hand, consists of 16 contiguous recorded mineral claims for a total area of 692 hectares. The property was submitted to sporadic exploration from the early 1950’s to 1979 that included geological mapping, rock sampling, trenching and diamond drilling.

Based on a mineralogical study conducted in 2016, and previous magnetic and IP geophysical surveys, mapping and channel/ grab sampling, Great Thunder decided to focus its attention first on the Chubb property.

In December 2017, the company initiated a drill program with two primary interests. First, management wanted to verify the pegmatite field at a depth of 40 metres. Second, it was necessary to further investigate two induced polarization anomalies.

Three 102-metre holes intersected previously unidentified spodumene-bearing pegmatites and expanded the potential for the project. Great Thunder’s President, Kevin Whelan, said, “While there is insufficient data to establish the true width of the pegmatites, we are excited by the discovery of previously-unidentified pegmatites at depth. We believe the potential for the project continues to expand.” 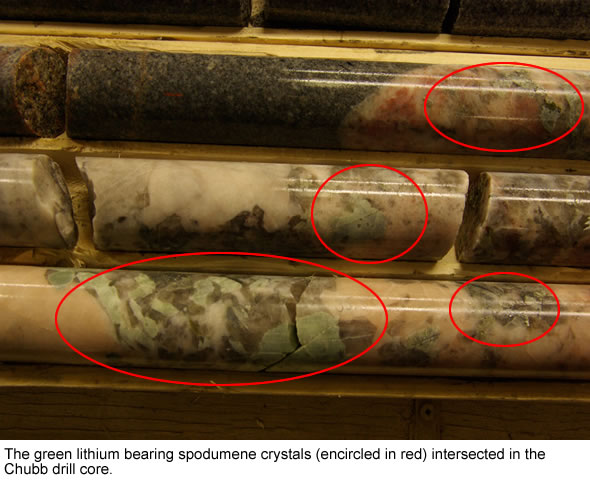 Furthermore, Enforcer Gold Corp (TSX-V: VEIN) reported that it added 19,352 hectares (47,818 acres) to its land position at the Montalembert gold project for a total land holding of 26,645 hectares (65,839 acres) in the process nearly doubling the area covered by the Globex/Enforcer option agreement..

Since optioning the Montalembert gold project in November 2016 from Globex, Enforcer has increased its land position 8-fold and now controls a very large block of underexplored and highly prospective ground.

The expanded land position is favored by multiple logging roads that access a considerable portion of the property. Enforcer will engage in a first-pass reconnaissance assessment of the new ground in Spring 2018 as a basis for its first phase of exploration in the area.

The Chubb lithium and Montalembert gold properties need much more work and they are being advanced by Globex’s respective option partners. At the same time, Globex receives cash and shares from these partners, which it uses to advance some of its own projects without causing dilution to its shareholders. Recommendation BUY.