This week EnWave Corporation (TSXV: ENW – $1.09 CAD & OTC: NWVCF – $0.91 USD & Frankfurt: E4U – €0.72 EUR) issued a positive update on the status of the ongoing research currently underway with the US Army Natick R&D Center. In a deal that was announced back in June 2017, Natick is working with EnWave to develop new foods that may be included in the Meals Ready to Eat (MRE) rations, on behalf of the US Army.

The Development of Superior MRE Choices

MREs are the primary meals issued to the military during field deployment. Each MRE allotment is intended for a single meal for one soldier, including a main entrée, sides, and a beverage. They are packaged for easy distribution, and to maintain a long shelf life without spoiling under intense conditions that may be encountered in the field.

Individuals may be issued an allotment of rations to last for several days during training and deployments, which contribute to the weight and bulk of the already heavy pack-load (often amounting to more than 100 pounds of gear) that each soldier must carry.

EnWave’s Radiant Energy Vacuum (REV) technology effectively removes most of the water from certain foods while maintaining most of the nutrient content. This has encouraged the US Army to consider the REV process as a means to develop new MREs that may be superior to the options currently available, and yet have a lower overall weight.

One very interesting aspect to this process is that the highly nutritious new foods under development are also flavorful and appealing to eat. The historic baseline for military food options, particularly the dehydrated MREs, is for choices that may have met dietary requirements, but would hardly be described as delicious to eat. However the meals under development using the REV technology are receiving very high reviews during testing and this certainly counts in the longer term approval process. The higher nutritious content also enables soldiers to be more effective in combat situations due to lower fatigue.

REV processing enables the foods to be intermediately dried, and then compressed prior to completing the dehydration. The result is that the meals retain the integrity of the compressed bars without crumbling or falling apart afterwards. This allows for the development of nutritional energy bars that are lightweight and yet high in protein content. The protein bar configuration for meals is also optimized to provide quick meals on the fly, which is often a typical necessity during a military deployment. 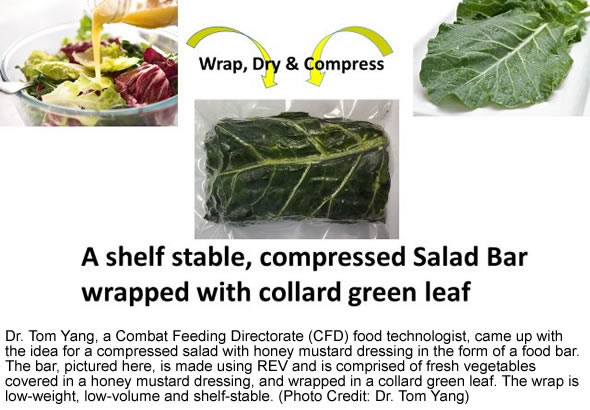 Successful Testing and Sampling Results During First Round of Review Process

Initial testing has focused on perfecting the power bars, so that they may be included as part of the MREs. Three primary factors were critical during these tests: warfighter feedback, nutritional content, and shelf stability.

Internal focus groups of up to 200 people involved in sampling of these new products have been very enthusiastic about the composition and flavor of the samples provided.

In addition, all MREs must meet nutritional standards. The REV protein power bars prepared have satisfied all these requirements. Finally, longer term studies to review shelf stability and durability under rigorous conditions are still underway but no issues have been encountered so far.

There are 24 different varieties of MREs currently approved for the military. The REV-dried range under development includes protein bars derived from meat, dairy, vegetable, and whole eggs. If satisfactory results indicate further potential, these power bars could eventually serve as a replacement to the current suite of MREs.

This is a promising start to the development process. Test work will continue at EnWave’s facility to refine the prototype products and ensure that they stand up to the precise requirements of the program. This ongoing work will also generate additional revenues for EnWave. 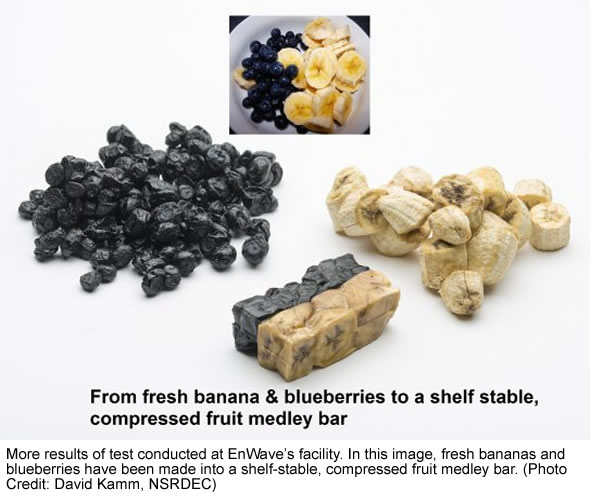 In other news, EnWave revealed that Tilray is the major Canadian cannabis player with which it signed a royalty bearing agreement back in October 2017. The license between the two companies grants Tilray an exclusive right to use and sub-license EnWave’’s proprietary REV dehydration technology in Canada for efficient production of high-quality dried and decontaminated cannabis products

The shipment and installation marks EnWave’s entrance into the rapidly growing Canadian cannabis market. The Company’s strategy, in partnership with Tilray, is to secure additional royalty bearing sub-licenses with additional licensed producers in the cannabis sector.

EnWave’s patented technology pasteurizes and uniformly dries cannabis in its natural state, without any additives, in under one hour, dramatically shortening the time from harvest to marketable products and circumvents the need to transport medical cannabis to highly-specialized and expensive off-site decontamination facilities.

Following installation of the REV equipment, Tilray, which is projected to achieve production capacity greater than 74 metric tons in 2018, will pay royalties based on the amount of cannabis processed using EnWave’s REV technology.

Securing the initial development program collaboration with the US Army Natick R&D Center was a breakthrough for EnWave. Just to get in the front door and be selected as a potential development partner involved an investigation to review the REV processing capabilities, and the Company itself. Natick also has visited the EnWave test facility several times since the cooperative effort commenced.

This intense scrutiny will be interpreted as a validation for EnWave by other potential clients. It represents yet another indication that the Company has developed a real technology that represents an advantage beyond other conventional processing options. Moreover, it demonstrates that EnWave is ready for prime time and a serious partner that can add value for its clients.

As the Company successfully advances further along the development process with favorable reviews, the overall outlook for a successful resolution increases. This in turn may lead to a decision to formally embrace the new power bars as part of the MRE program, and require suppliers to purchase REV machines in order to meet delivery commitments.

A successful outcome to this process would be extremely attractive for EnWave shareholders. Consider that military spending is typically very stable and less affected by variables in market cycles that consumer goods may face. Also, the scale of a production contract for the MREs developed using REV technology would probably involve the sale and installation of numerous large machines, and generate significant long term royalty payments to the Company. Recommendation BUY.